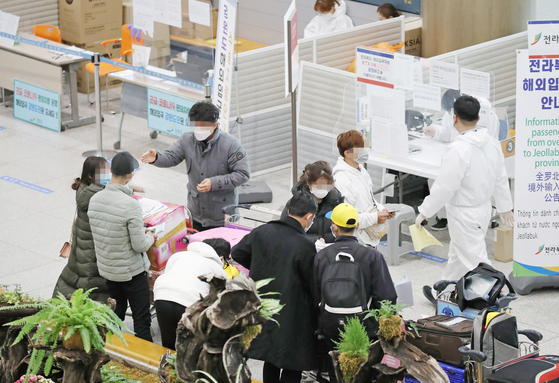 Travelers go through screenings at Incheon International Airport as all visitors to the country, including Koreans, are required to show negative polymerase chain reaction (PCR) tests starting Wednesday. [YONHAP]


Daily Covid-19 cases rebounded to over 400 as the government prepared to announce a new set of social distancing measures later this week.

Korea reported 440 new cases, including 417 local infections, bringing total patients to 88,120 as of Tuesday midnight, according to the Korea Disease Control and Prevention Agency (KDCA) Wednesday.

There were 23 new imported cases, including seven from the United States, three from Japan and two each from Indonesia and Saudi Arabia.

Foreigners without negatives PCR test results are banned from entering the country, while Koreans will have to pay for a 14-day isolation period at a quarantine facility after getting tested.

Foreign visitors already were required to submit PCR tests since Jan. 8. There are 128 confirmed variant cases from overseas so far.

The government has been planning to reveal a new social distancing regimen as early as Friday to allow the public greater “autonomy and responsibility,” especially to address the woes of small businesses. The plan may be announced on the same day the country begins its first coronavirus vaccinations for residents and staff of nursing homes. 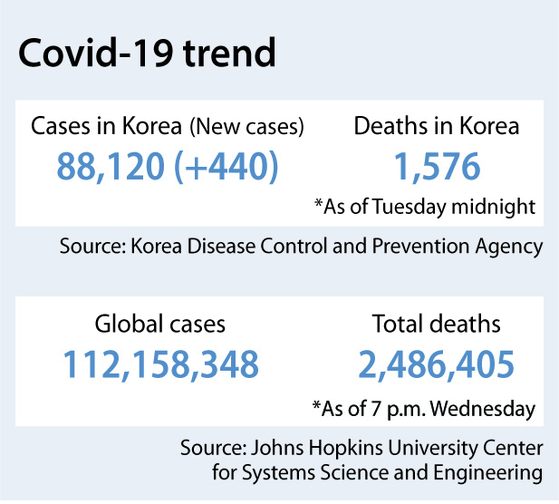 However, herd immunity is not expected until near the end of the year, meaning months more of caution from the public, health authorities stressed.

Since Feb. 15, social distancing measures were lowered a notch to Level 2, the third highest in the country’s five-tier system, in the greater Seoul area and to Level 1.5 for other regions.

A ban on gatherings of five or more people has been retained. However, restrictions on the operating hours of many businesses have been extended an hour or lifted all together. The current scheme ends on Feb. 28.

A range of 400 to 500 cases is within the range of Level 2.5 restrictions under the current social distancing scheme.

Of the new local infections Tuesday, 138 cases were in Seoul, 137 in Gyeonggi and 17 in Incheon.

The new school year kicks off next week, with younger elementary students expected to attend physical classes daily, which could also lead to new infections.

The country continues to see clusters linked to gatherings around the Lunar New Year holiday earlier this month, as well as from nursing homes, workplaces, industrial sites, hospitals, call centers and churches.

An insurance company call center in Gwangju reported 31 cases as of Wednesday after confirming the first patient Monday. Health authorities have ordered the testing of some 1,500 people who work at its building and shut down the fourth and fifth floors used by the insurance company. Employees at call centers work in tight spaces, environments in which the virus can easily spread, and health officials are looking into any violations of social distancing regulations.

A plastic factory in Namyangju, Gyeonggi, reported a total of 184 cases, according to the KDCA Wednesday, and another cluster of infections related to a dance hall in Seongnam, Gyeonggi, has 70 cases. The Soonchunhyang University Hospital in Yongsan District, central Seoul, continues to add cases, bringing total infections to 231.

Health authorities found half of the cases of violations of a ban on larger gatherings under Level 2.5 social distancing measure in the Seoul metropolitan area were at nighttime entertainment facilities.

The Central Disaster and Safety Countermeasure Headquarters said Wednesday that 1,235 people were caught violating the ban on gatherings from Dec. 8 to Feb. 14, of which 54.9 percent, or 678 people, were at entertainment facilities such as bars. Nighttime entertainment facilities had been banned from opening during this period under stricter governmental social distancing measures.

This was followed by 157 people violating the ban on private gatherings of more than five people, 142 people at indoor sports facilities, 84 people at noraebang (singing rooms) and 58 people at religious facilities.