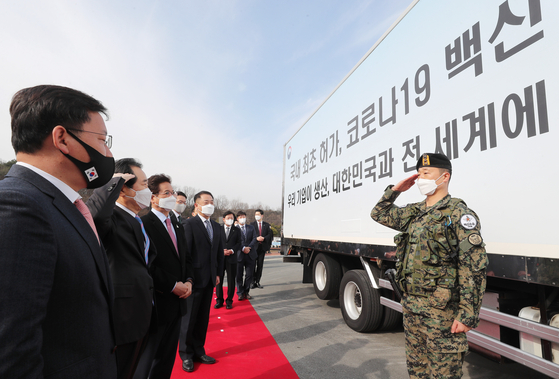 
The first shipment of AstraZeneca’s Covid-19 vaccines rolled out Wednesday ahead of a free nationwide inoculation program that starts Friday, which the prime minister described as a “step toward returning to daily life.”

The initial batch of AstraZeneca vaccines manufactured by SK Bioscience left its factory in Andong, North Gyeongsang in a refrigerated truck Wednesday morning. It was escorted by a military and police motorcade to a logistics center in Icheon, Gyeonggi. SK Bioscience is a contract manufacturer of the British-Swedish pharmaceutical company AstraZeneca’s coronavirus vaccine, the first to be authorized in Korea.

Starting Thursday, vaccines for 780,000 people, or 1.57 million doses, will be delivered to some 1,900 nursing homes, high-risk facilities and public health centers nationwide. Military aircraft will deliver them to remote areas such as Jeju and Ulleung islands.

Inoculations begin Friday at 9 a.m. of residents under 65 of nursing homes, convalescent hospitals and other high-risk facilities, and health care workers.

“Finally, we are taking the first step toward returning to the daily life that we have all been looking forward to. The government is thoroughly preparing the entire process of the vaccine rollout -- from transportation, distribution and inoculation to adverse reaction management -- so that the public can receive shots with confidence.”

Chung, flanked by military and provincial officials, later watched a batch of vaccines for 173,000 people leaving on a truck for the logistics center.

The AstraZeneca vaccine, which requires a two-dose regimen, can be stored at regular refrigerator temperatures between 2 to 8 degrees Celsius, while mRNA drugs require trickier ultra-cold chain storage.

The Korea Disease Control and Prevention Agency (KDCA) said that minor adverse reactions upon vaccination include swelling, fever and muscle pain, but that most such symptoms go away within three days.

Some rare severe reactions include anaphylaxis, accompanied by shock, shortness of breath, loss of consciousness and swelling of the mouth.

The KDCA advises individuals with a history of severe allergic reactions, those suspected to have Covid-19 or have a fever of over 37.5 degrees Celsius not to get vaccinated in the initial round. Pregnant women, people 65 and older and children under 18 are not recommended to take the vaccine until further studies on the safety and efficacy for these groups.

Separately, Korea is set to receive its first batch of Pfizer vaccines on Friday, enough to cover some 58,500 people, through the Covax Facility, the World Health Organization’s vaccine-sharing mechanism.

The KDCA aims to get 70 percent of its population vaccinated by September and achieve herd immunity by November.

The Seoul Metropolitan Government said Wednesday it will start a campaign Friday to vaccinate 6.6 million residents, or 70 percent of adults over 18, by the end of October.

Acting Seoul Mayor Seo Jung-hyup said in a briefing Wednesday that 96,000 people under 65 in nursing homes and other high-risk facilities in Seoul will be in the first to be vaccinated by the end of March.

In a second phase from April to June, vaccinations are planned for 1.85 million people in Seoul including people 65 and over, medical workers, pharmacists, the disabled and other vulnerable populations.

The general public will be vaccinated from July to October, according to the Seoul city government, prioritizing adults aged 50 to 64, people with chronic diseases such as high blood pressure, soldiers, police, firefighters, social workers and school and child care facility workers. 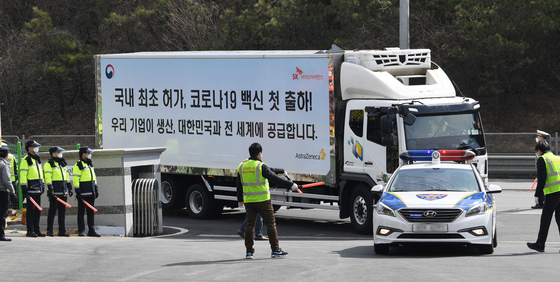 A truck carrying the first batch of AstraZeneca vaccines arrives at a logistics center in Icheon, Gyeonggi, accompanied by a police and military motorcade Wednesday afternoon after departing from a factory in Andong, North Gyeongsang. [NEWS1]