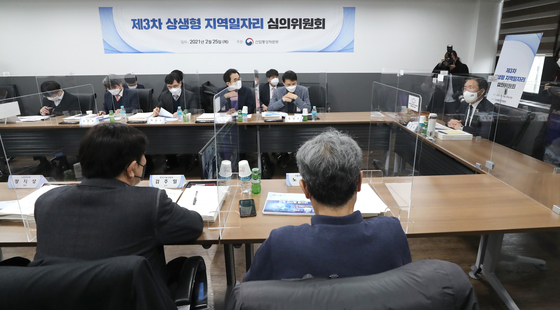 Minister of Trade, Industry and Energy Sung Yun-mo, right, presides over a meeting Thursday that named Gunsan in North Jeolla and Busan as the latest co-partnership projects between local governments, labor unions and private companies at the government complex in Seoul. [YONHAP]


Gunsan in North Jeolla and Busan will partner with labor unions and private companies to build industries and create jobs, similar to a car-building partnership in Gwangju.

The partnership projects in the two cities are expected to create 1,476 jobs.

Gunsan's local economy has been crippled since GM shut a 22-year old plant in May 2018.

The partnerships are the second and third of their kind following the one in Gwangju, where the city government and Hyundai Motor started a company in 2019 that will make vehicles. 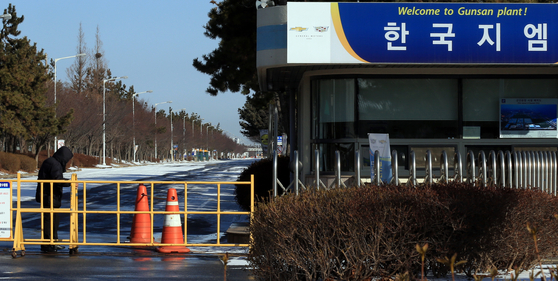 The entrance to GM's Gunsan plant in North Jeolla shut tight on Feb. 13 2018 when the automaker decided to shut down the plant entirely. [YONHAP]


According to the Ministry of Trade, Industry and Energy on Thursday, both Gunsan and Busan will focus on factories making “e-mobility” products, meaning electric vehicles (EV) and EV parts.

In Gunsan, the industrial development will be led by Myoungshin Industry, an EV OEM manufacturer, and four other EV related companies: Edison Motors, Daechang Motors, MPS Korea and Kostec.

In 2019, Myoungshin Industry purchased GM’s Gunsan plant for 255 billion won ($230 million), which it plans to turn into an EV production line.

A total of 352.8 billion won will be invested in the Gunsan partnership over the next three years, and new jobs are expected for 1,106 locals.

According to the government, the companies will cooperate in a wide range of areas from research and development to marketing and logistics.

The project in Busan will be focused on EV parts.

Korens EM, a unit of Korens that specializes in auto parts, has core technology of EV drive units through a strategic alliance with BMW.

In Busan, Korens will work with other parts suppliers to produce EV parts.

The Busan project is expecting an investment of 252.3 billion won in the next three years, and new jobs for 370 locals.

In both partnerships, the local governments promised certain kinds of support including deregulations.

“The recent co-partnership projects will be the foundation for inclusive growth and a transition toward an environmentally-friendly vehicle industry, which will meet [the government’s] carbon neutrality goals and balanced regional development,” said industry minister Sung Yun-mo.

“Gunsan is expected to see a significant rebound as an EV cluster utilizing [existing] production facilities and skilled workers is being formed,” Sung added.