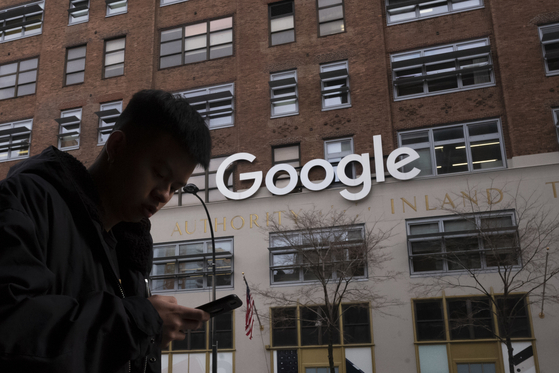 In this Dec. 17, 2018, file photo a man using a mobile phone walks past Google offices in New York. [AP/YONHAP]

As controversy mounts worldwide over whether tech firms like Google and Facebook should pay media outlets for news content, local experts are starting to question whether Korea should also start pushing for a change.

On Wednesday, Australia passed a new law that requires Google and Facebook to negotiate licensing agreements with news publishers. Australia was the latest battleground in the heated discussion, with Facebook having blocked news reading or sharing for the country’s users in opposition to the bill last week.

Lawmaker Kim Yeung-shik of the People Power Party is preparing a similar bill to Australia’s — one that would force global tech firms to compensate local media for previewing snippets of articles on their own websites.

“We’re planning to submit reform bills on copyright law and the Information and Communication Network Law in the near future,” said Kim.

”Global firms offer website links but technically they’re exposing some news content, so there should be guidelines to decide the amount of compensation and force them to make payments.”

In Korea, leading portal sites Naver and Kakao already pay local media for their news content and advertising fees. These companies are different from Google and Facebook, in that they provide whole articles within their own website, rather than offering links to media outlets’ official websites.

Lawmaker Kim noted that Naver and Kakao paying for news content in Korea while global firms do not can be seen as discrimination.

The issue of paying for content recently arose in Australia, which doesn't have the extra issue of the discrepancy with local portal sites.

On Feb. 23, Facebook said it would withdraw its boycott movement in Australia and restore news content this week. The retreat came less than a week after the unprecedented move, which drew fierce criticism from users that viewed the decision as “undemocratic” and “suppressive."

Google, on the other hand, took a gentler approach.

The company announced a $1 billion investment plan for news publishers last October and on Feb. 17, was reported to have reached an agreement with News Corporation, one of the world’s largest media companies that owns The Sun, The Times, The Australian and The Wall Street Journal.

Australia is not the only one that is trying to force global IT firms to compensate for news content. Lawmakers from the European Union are reportedly preparing a bill with the same intention.

The Financial Times reported earlier this month that members of the European Parliament were drafting amendments on EU digital laws to “include aspects of the Australian reforms.”

In September 2020, Google launched an app service called News Showcase that compensates partnered media. The service has not been launched in Korea.

“Google’s News Showcase has a similar model to domestic portal news services,” said Prof. Hwang Yong-suk of the communication department at Konkuk University. “A global content provider launching a service that compensates local firms in several markets and not launching it in others can be interpreted as a discriminative act.”

Some experts say that even if Google decides to start a news service in Korea, the possibilities are slim that it would actively step out to negotiate with local media.

“The European Union legislated the copyright law in 2019 to obligate content providers to contracts and provide adequate compensation for copyright work,” said Hwang. “That’s the legal basis of ongoing efforts to force Google and Facebook to pay its news publishers. Korea, on the contrary, lacks such a method to impose that obligation.”

“Global IT platforms like Google and Facebook gain benefits like advertising fees for providing news content they were not involved in producing— it’s an unfair practice,” said Prof. Choi Jin-bong of media communications at Sungkonghoe University. “News consumption today is concentrated online. There needs to be legislation to reform this system in a way that could give more compensation to news publishers.”

Jin Min-jung, a senior researcher at the Korea Press Foundation, believes action from Korea alone will be insufficient to make a point against the IT giants.

“Global firms like Google, Apple, Facebook and Amazon are sure to continue expanding their dominance over the digital market,” she said. “In such circumstances, it’s going to be extremely difficult for individual news outlets to deal with these companies alone.

"As the fight will be a tough one for a single country, the best way may be multiple countries working together to voice their concerns.”

[CARD NEWS] The Notebook Princess, trapped by her cronies’ notebooks