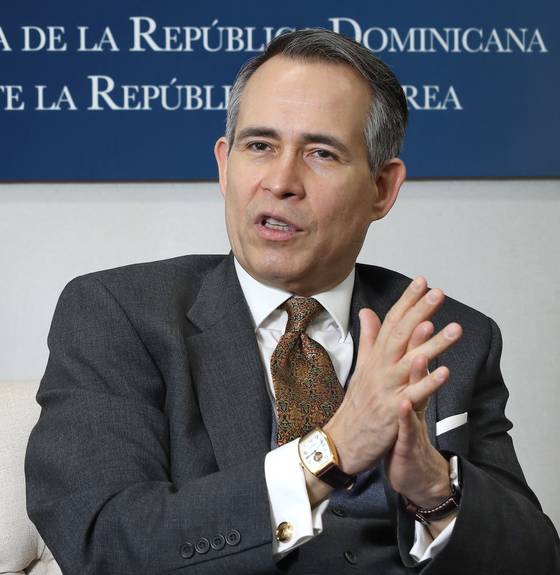 
Where BTS and bachata come together, there you will find Dominicans, said Federico Cuello, the new ambassador of the Caribbean nation in Korea.

Bachata is a dance originating in the Dominican Republic that is derived from a mix of rhythmic bolero with other dances of Afro-Antillean heritage, such as son, the cha-cha and merengue. The dance was inscribed as an intangible cultural heritage of humanity by Unesco in 2019.

The dance has been popular in Korea, often adapted for ballroom dancing. There are at least 25 active classes on bachata throughout the country, according to the Embassy of the Dominican Republic in Korea.

“Seeing that there is an active interest amongst Koreans to learn bachata, the embassy decided to host several virtual classes for safe, yet social, dancing during the pandemic,” Cuello said.

Culture and the arts, as strong as they are as platforms of diplomacy even in times of a pandemic, are not the only areas the Dominican mission in Korea is focusing on this year.

By November, the embassy plans to host visits by ministers of trade and industry; energy; and culture.

“The visits could provide opportunities between the two countries to sign agreements on decarbonization of the power and transport sectors, launching the process of the Dominican Republic becoming the pioneer in the region in the use of alternative energies in transport, with collaboration with Korea,” Cuello said.

Dominican President Luis Abinader announced last year during his inauguration the nation’s goal to have at least 25 percent of its power generation be sourced from renewables by 2030. The Dominican Republic has its eye on Korea as a partner in Asia.

“We see the Korean New Deal as the way ahead in the recovery of the world after the pandemic,” Cuello said. “When disaster hits, you have to build back better. Korea has shown its ability of being ahead of the curve, and its green recovery efforts are considered a blueprint to follow in the Dominican Republic.”

Cuello recently sat down with the Korea JoongAng Daily to discuss the latest highlights in the two countries' bilateral ties. In addition to the 177th Independence Day anniversary of the Dominican Republic on Feb. 27, Cuello relayed the details of upcoming projects including the filming of a Korean thriller on Netflix in the Dominican Republic against the backdrop of the Caribbean Sea; a special week of exhibition in Korea to showcase masterpieces by 25 Dominican artists, many of whom are of multiethnic backgrounds; and a plan to develop with Korea the Dominican port of Manzanillo as the logistics hub of all routes passing through to Europe, Asia and the Americas. The following are edited excerpts of the interview.


Q. It seems that Korea and the Dominican Republic share similar experiences such as invasions by neighboring countries and rapid economic development. Can you tell us more?

A. The Dominican Republic was occupied by Haiti from 1822 to 1844. We have excellent relations with Haiti now, but during their 22-year occupation they suppressed our language, culture and religion. As their governance and economic system did not work, their ruler, General Boyer, was overthrown in 1843 and our side of the island separated from Haiti the following year. So, Independence Day is an opportunity for all Dominicans to reconnect with the roots of our sovereignty.

When we became independent in 1844, the Dominican Republic was the poorest part of the island of Hispaniola. But by 2019, it was the sixth largest economy in Latin America, according to the International Monetary Fund. Between 1991 and 2019, the country also has had the highest average rate of yearly GDP growth in all the Americas, with rates ranging between 6 to 7 percent. It is a type of story that many of your readers in Korea would not be strangers to. 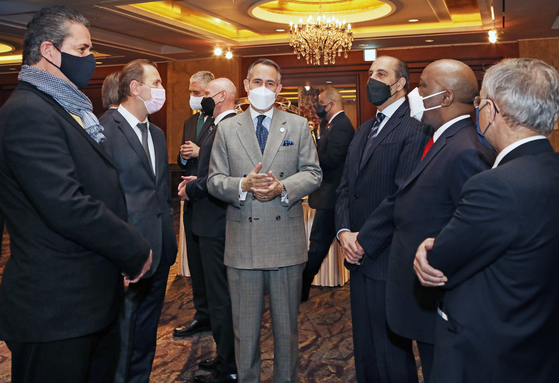 Ambassador Cuello, center, at the reception to celebrate the 177th anniversary of the Independence Day of the Dominican Republic at the Lotte Hotel Seoul on Feb. 24. [PARK SANG-MOON]


Q. There seem to be several ambitious Dominican programs to boost eco-tourism by combining its scenic sites with green transportation. What are some recent updates regarding tourism in the nation, including prevention measures against the coronavirus infections?

A. We have received our first batch of vaccines on Feb. 15 and immediately launched our vaccination programs. The plan is to have our 7 million adult population — out of a total 11 million — vaccinated by the end of the year. Like Korea, inbound travelers have to present documentation proving that they took a test within 72 hours of their flight and that they are Covid free.

In 2019, we had almost 7 million visitors, generating $7.4 billion in revenue, continuing three full decades of positive trends in the tourism sector. Dominican Republic has hundreds of kilometers of white sand beaches and clear and warm tropical waters. It boasts over 7,000 indigenous species, the widest biodiversity of the Caribbean Basin. We are one of the favorite vacation destinations in the Caribbean, with 98 percent of our tourists returning every year. From 2015 to 2019, we saw a boost in tourists from Korea as well, as the number grew from 1,811 to 3,544, according to the Central Bank of the Dominican Republic.

The tourism sector has been especially hit hard during the pandemic, but we are preparing for a greener and resilient recovery, and we are looking to Korea to partner with us. We have seen Korea’s New Deal, and it is our goal to decarbonize the Dominican Republic using technology from Korea. 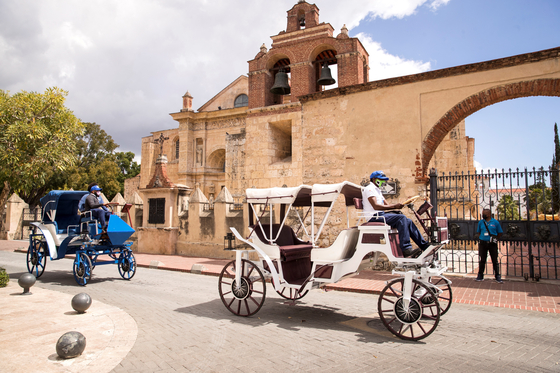 Cars powered by electricity circulate through the colonial zone in Santo Domingo, Dominican Republic, on Feb. 23. The Dominican authorities have transformed the old horse carriages that circulated in the Colonial Zone so that they are now powered with electricity, as part of the efforts in favor of sustainability and animal protection, which were presented this Tuesday in Santo Domingo. [EPA/ORLANDO BARRIA/YONHAP]


Q. Would some of those plans entail Korea’s electronic vehicles?

President Abinader sent out a message by arriving in an electronic vehicle at his inauguration ceremony. He also participated in the groundbreaking ceremony for construction of a new LNG terminal in the nation last November, a project taken up by Posco E&C. Posco is one of 20 Korean companies currently operating in the Dominican Republic, including Korea Electric Power Corporation, SK E&S and Samsung Electronics Latinoamérica S.A. 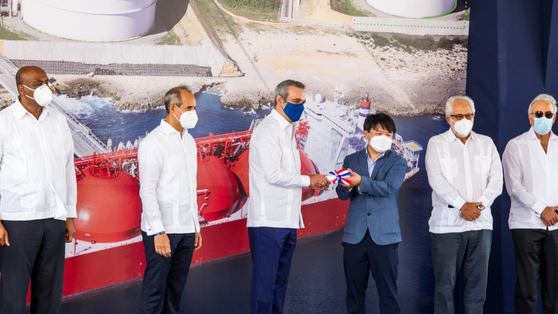 Dominican President Abinader during the groundbreaking ceremony for construction of a new LNG terminal in the nation last November, a project taken up by Posco E&C. [EMBASSY OF THE DOMINICAN REPUBLIC TO KOREA]


Q. Tell us about the plan regarding the Port of Manzanillo.

A. One of the national priorities of the Dominican Republic is to become a logistics hub of the Americas, as we are in a central location in the middle of the Western Hemisphere. We are home to 15 natural ports and seven international airports, and it takes less than nine days for vessels to travel by sea, and less than nine hours by plane, from the Dominican Republic to Europe.

The Port of Manzanillo is in the northwestern part of the country, whose deep seabed does not require much dredging. All routes north, south, east and west of the country go through the north of Manzanillo, to connect Europe, Asia and North and South Americas, so it is the ideal location to create a logistics hub.

Why consider Busan as a possible counterpart, one may ask. Busan is the logistics hub of Asia, with several decades of experience. Partnering with such a city only makes sense. Our Ministry of Industry and Trade is interested in pursuing this project, and we are planning on discussing it with the port authority of Busan.


Q. Korea’s Ministry of Foreign Affairs will be participating in the 13th Korea-SICA [Sistema de la Integración Centroamericana] meeting in April. Do you expect the Korea-Central America FTA to be one of the topics tabled for discussions?

A. I certainly hope so. I think it was an unfortunate decision of the previous Dominican administration to have missed the opportunity to join the other countries in Central America in signing an FTA with Korea.

Regarding the trade between the Dominican Republic and Korea, we have seen a steady increase over the years: The total bilateral trade volume was $294.4 million in 2014, which grew to be around $341 million by 2019, according to Korea's Ministry of Foreign Affairs. We are two countries with competitive edges on different sectors, with Dominicans excelling on medical devices, gold, electronics, cigars and fair-trade fruits, and Koreans excelling on automobiles, consumer electronics and semiconductors.


Q. Korean thriller on Netflix, “Suriname,” will be shot in the Dominican Republic. Any updates?


Q. We have to talk about the Dominican baseball players. In 2020, the KBO's Most Valuable Player and Best Pitcher were both Dominicans, not to mention the historic and popular Dominican players in the United States and elsewhere.

A. Baseball is a national sport and a national passion of the Dominicans. We got it from Cuba, not the United States, by the way. The first baseball teams came from Cuba in the late 19th century. Today, all the major league baseball teams have so called boot-camps in the Dominican Republic, and they start training the athletes at the right age with the skills needed to become eventually valuable players. As of 2019, 21 percent of all foreign players that have played in Korea are of Dominican origin. We’ve had a total of 79 Dominicans play baseball in Korea.

Q. What should we expect to see during the First Dominican Week in Korea?

A. It will be a weeklong event to commemorate all things Dominican, to take place in Seoul in November. The week will present a wide array of activities including the painting exhibition "The Republic of Color," composed of 25 masterpieces by 25 Dominican artists, including Candido Bido, Domingo Liz, Jose Cestero and Dario Suro, all of whom represent the creole ethos of the people of the Dominican Republic, born uniquely through the mix of French, Dutch, English and Spanish influences in the Antillean nation of the Caribbean. A gala reception, a gastronomic dinner, seminars and ministerial encounters are planned as well. It should strengthen our bilateral bonds even more.