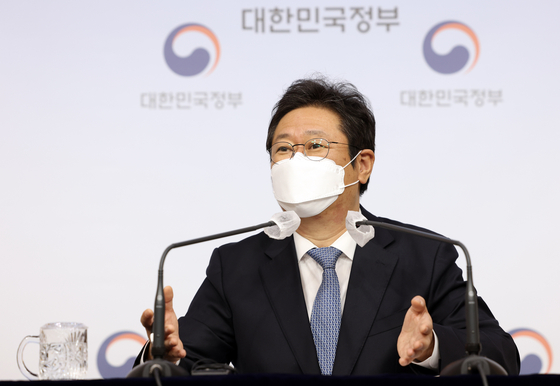 Hwang Hee, the newly appointed minister of Culture Sports and Tourism, met with local reporters for the first time on Thursday in central Seoul and said that promoting Korea and its culture overseas is one of the three main goals he’s set for his term. Hwang was appointed to the office on Feb. 15.

“So far, we’ve focused more on disseminating new information and promoting what’s going on in Korea to Koreans,” said Hwang. "It’s time to make some kind of a ‘PR concept design team’ within the ministry so that we can focus on what should be promoted internationally and what should be done domestically.”

Hwang explained that there’s a reason why the New York Times and the Washington Post recently chose to locate regional newsrooms in Seoul, adding that the ministry can collaborate with foreign media outlets to show the dynamics of Korea and its culture.

In terms of the recent spat over Korean heritage, including kimchi, between Korea and China, Hwang said that such tensions will be alleviated if “Korea promotes its cultural more actively overseas.”

Although the minister did not specifically mention the joint bid by the two Koreas to co-host the 2032 Summer Olympics, which was scrapped before it took off, Hwang stressed the importance of establishing a “separate track” with North Korea when it comes to engaging in talks regarding joint cultural and sports events.

“Right now, such talks always get held together with political issues,” said Hwang. “That’s why whenever there’s something going on politically, planned cultural and sports events get affected. I am pretty sure that North Korea also wants to deal with it separately as it hopes to incorporate into the international community.”

When a dress is not just a dress