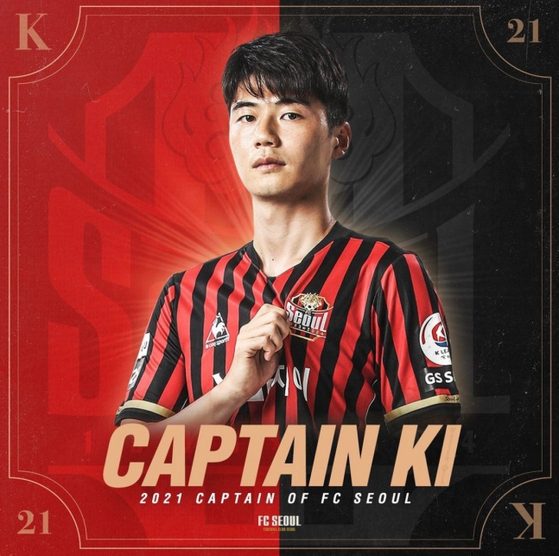 On Thursday, Ki wrote a post on his Instagram responding to the accusation that Ki and another elementary school classmate sexually and physically assaulted younger teammates. Ki's agency had denied the allegations the previous day.

"The [sexual allegations] have nothing to do with me," Ki wrote on Instagram. "It never happened. I will stake my football career on that."

Ki added that he will "take legal action against all those who have posted malicious comments on unidentified matters."

Earlier on Wednesday, Park Ji-hun, attorney for Hyun Law, put out a press release, claiming the two alleged victims were forced to perform sexual acts by two older students on the same elementary school football team in South Jeolla, and were "mercilessly beaten" if they did not oblige.

Although no names were mentioned, Park described one of the two perpetrators as "a star player who recently joined a club in the greater Seoul area" and was in sixth grade when the incident happened between January and June 2000.

Based on the age and region, online commentators and media were quick to point to Ki, who spent his childhood in South Jeolla and rejoined the K League's FC Seoul last July after spending more than a decade playing overseas.

His agency C2 Global announced that Ki has "no connection whatsoever" to the case described by the alleged victims. The agency also said Ki will take any necessary legal action in response to damage incurred by false accusations.

The case took a new turn later on Wednesday as new claims emerged that the alleged victims had themselves been the perpetrators of a different incident of sexual assault in the past.

An anonymous source, who claimed to be a former teammate of the victims, told media that it is impossible for the alleged victims to have been sexually assaulted as "20 to 30 people lived together in the football team dormitory," which was similar to an "army camp."

Another former teammate also claimed that the two alleged victims were perpetrators of sexual assault, saying they were "forced to leave their middle school due to [reports of assault]."

A similar claim was posted on online football community FM Korea by a user claiming that he was physically assaulted by the alleged victim.

In a post entitled "Disclosure of the agent which accused Ki Sung-yueng", the commenter wrote, "When I was in second grade of middle school and [the alleged victim] was in third grade, he knocked me out and giggled, considering it some sort of game."

The user added that the incident was also reported in the news, adding a link to a 2004 article reporting sexual assault in the Jeonnam Dragons' youth team that resulted in at least one club executive losing their job.

A number of school bullying allegations against professional athletes and entertainment stars have been in the news in Korea recently, but the accusations against Ki are the first to involve sexual assault.