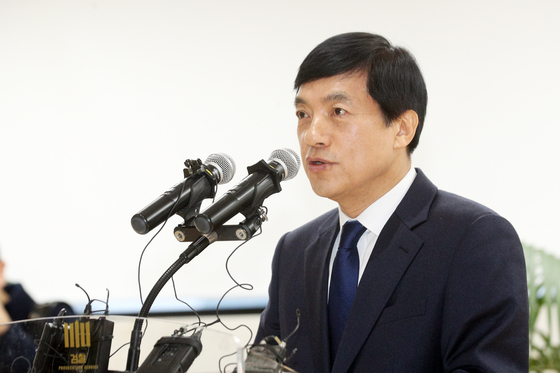 
Seoul Central District Prosecutors’ Office Chief Lee Sung-yoon is being investigated for allegedly abusing his power to stop prosecutors from looking into an illegal travel ban against a scandal-ridden former vice justice minister in 2019.

Suwon District Prosecutors’ Office has sent two subpoenas to Lee, the first last weekend and the second earlier this week, sources informed about the probe told the JoongAng Ilbo on Wednesday. The probe was triggered by a complaint filed against Lee on Feb. 18, sources said. It was not made public who filed the complaint.

The Suwon District Prosecutors’ Office is currently investigating a suspicion that the Ministry of Justice circumvented the law in 2019 to issue an overseas travel ban against former Vice Justice Minister Kim Hak-eui in order to investigate suspicions that he took bribes and sexual favors. 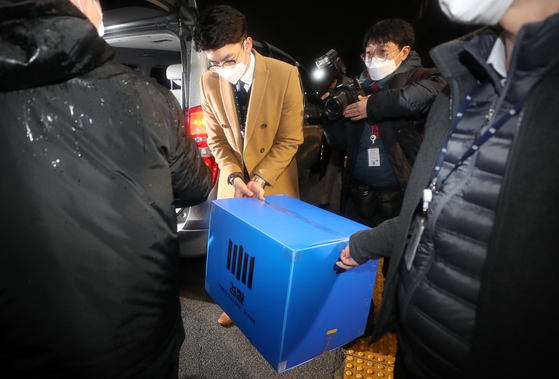 Following their raid of the Ministry of Justice on Jan. 21 for an investigation into the allegation that the ministry had violated laws to issue a travel ban against former Vice Minister of Justice Kim Hak-eui in 2019, prosecutors move a box containing seized evidence. [YONHAP]


Last month, a whistleblower filed a petition to the Anti-Corruption and Civil Rights Commission that the ministry and a factfinding team of the Supreme Prosecutors’ Office had illegally banned Kim, who briefly served as vice minister of justice during the Park Geun-hye administration, from leaving the country on March 23, 2019. At the time, President Moon Jae-in ordered a reinvestigation into whether Kim had received sexual favors and bribes from businessmen from 2006 to 2009 when he was a senior prosecutor.

Kim resigned as vice justice minister in March 2013 after six days on the job, following the circulation of a video that appeared to show him engaging in sexual intercourse with a woman at a party. He was investigated by the prosecution in 2013 and 2014, but cleared each time.

A third probe, ordered by Moon, took place by the factfinding team of the Supreme Prosecutors’ Office in March 2019. Kim was jailed October 2020 after an appellate court overturned his earlier acquittal on a bribery charge. 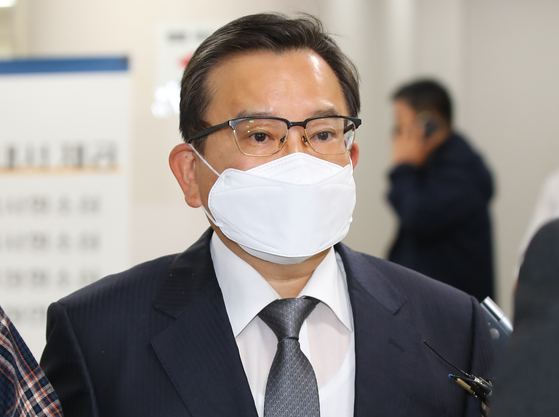 
According to the whistleblower’s complaint, Prosecutor Lee Gyu-won of the factfinding team requested the Immigration Office of Incheon International Airport stop Kim’s departure from the country.

The complaint said Kim was not a criminal suspect in any investigation when the request was made. It also noted that Prosecutor Lee had no authority to request a travel ban for Kim.

At the time, Seoul Central District Chief Lee Sung-yoon was serving as the Anti-corruption Department Chief of the Supreme Prosecutors’ Office.

Until recently, Lee was listed as a witness in the Suwon District Prosecutors’ Office’s current probe. He became a suspect after the complaint was filed.

The investigation team already questioned other prosecutors who were involved in the decision-making process when the travel ban was issued against Kim in 2019.

Lee issued a statement on Wednesday, denying claims he had abused power to pressure the prosecutors to drop the case in 2019.

As Lee formally became a suspect of a criminal investigation, speculations grew that the Suwon District Prosecutors’ Office may seek a warrant to arrest him for questioning. The prosecution normally tries to persuade a suspect to participate in a questioning when he or she turns down subpoenas more than twice.