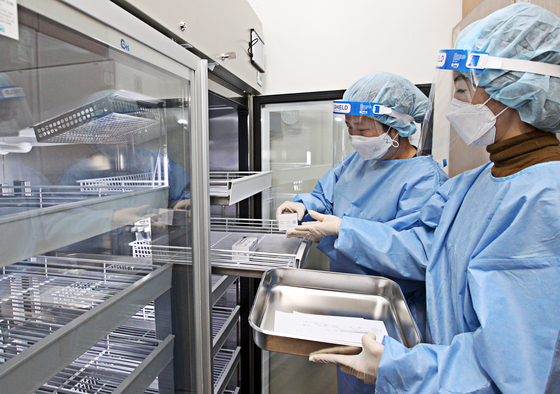 AstraZeneca vaccines are stored in refrigerators at a health care center in Dongjak District, southern Seoul, Thursday, a day ahead of the start of the country’s Covid-19 vaccination program. [NEWS1]


Korea will kick off its free Covid-19 vaccination program nationwide Friday at 9 a.m. without designating a specific person to receive the first jab.

The Korea Disease Control and Prevention Agency (KDCA) said Thursday that everyone at health centers and nursing homes who receive shots at 9 a.m. are the “No. 1 recipients" of the country’s first Covid-19 vaccines.

Health officials said 5,266 people under age 65 at 213 nursing homes and other high-risk facilities nationwide will receive the first AstraZeneca shots on Friday, the first day of vaccinations.

An initial delivery of AstraZeneca vaccines from SK Bioscience’s factory in Andong, North Gyeongsang, was transported in a large refrigerated truck to a logistics center in Icheon, Gyeonggi, Wednesday, starting a five-day shipment process of 1.5 million doses.

The doses that arrived at the Icheon logistics center were sorted and delivered to convalescent hospitals and health centers across the country Thursday through 55 smaller one-ton refrigerated trucks with police and military supervising the process.

The vaccines will eventually be distributed to over 1,900 nursing homes and health centers across the country over four days.

This first batch of AstraZeneca vaccines is enough for 785,000 people, 35,000 higher than an initial estimate, and will be administered to patients and health care workers under the age of 65 at nursing homes, convalescent hospitals and other high-risk facilities.

There were some delays, and the vaccines left the logistic center at a little past 5:00 a.m. Thursday as loading time took slightly longer than expected and there were also minor obstacles in the delivery to Jeju.

A batch of 1,950 vaccines set to be delivered by ferry to Jeju from the Port of Mokpo in South Jeolla Wednesday afternoon was recalled when the proper storage temperature was not maintained. The temperature dropped to 1.5 degrees Celsius (34.7 degrees Fahrenheit), and as a precaution a new batch was sent out later that evening and arrived on Jeju Island at 5:45 a.m. Thursday.

The AstraZeneca vaccine, which requires a two-dose regimen, needs to be stored at regular refrigerator temperatures between 2 to 8 degrees Celsius. While it is easier to transport and store than mRNA vaccines, like the ones from Pfizer and Moderna that require trickier ultra-cold chain storage, maintaining the right temperature still is important.

Health authorities said Thursday that 93.7 percent of the residents and staff, or 289,480 people, under the age of 65 at these high-risk facilities have registered to get vaccinated as of Thursday, an increase of 209 people from the previous count.

There has been some controversy on who should receive the first coronavirus vaccine shot in Korea, with some countries having leaders set an example to convince the public to get inoculated.

However, health centers and nursing homes in cities and provinces across the country are each deciding on their first recipients, oftentimes medical professionals in each facility, instead.

The KDCA said that, “Rather than putting weight on the first recipient of the Covid-19 vaccine, we will put significance on the fact that we are beginning inoculations.”

The first batch of Pfizer vaccines, enough to cover some 58,500 people, obtained through the Covax Facility, the World Health Organization’s vaccine-sharing mechanism, are set to arrive at the Incheon International Airport Friday.

The initial Pfizer vaccines will be administered to 300 frontline medical professionals treating Covid-19 patients starting Saturday at 9 a.m. at the National Medical Center in central Seoul.

This first round of vaccinations is expected to be completed sometime in March.

The KDCA aims to get 70 percent of its population vaccinated by September and achieve herd immunity by November. Korea has sourced enough vaccines to inoculate a total of 79 million people, more than enough to cover its 52 million population, through individual contracts with five global drug companies — AstraZeneca, Pfizer, Moderna, Johnson & Johnson's Janssen and Novavax — and the Covax Facility mechanism.

The government plans to issue certificates to vaccinated people. 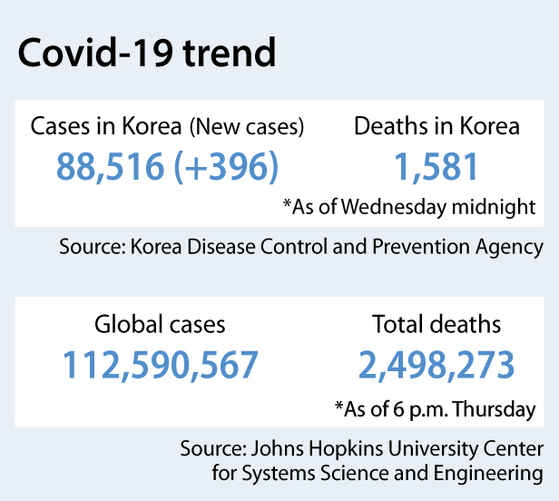 Daily Covid-19 cases dropped slightly to just below 400 as the country prepares to introduce new social distancing measures as early as Friday.

Health authorities reported 14 new variant cases from overseas, of which two were locally transmitted. One was the South African variant, while the others were the British strain. This brings total variant cases to 142.

Of the local transmissions, 114 cases were reported in Seoul, 132 in Gyeonggi and 22 in Incheon.