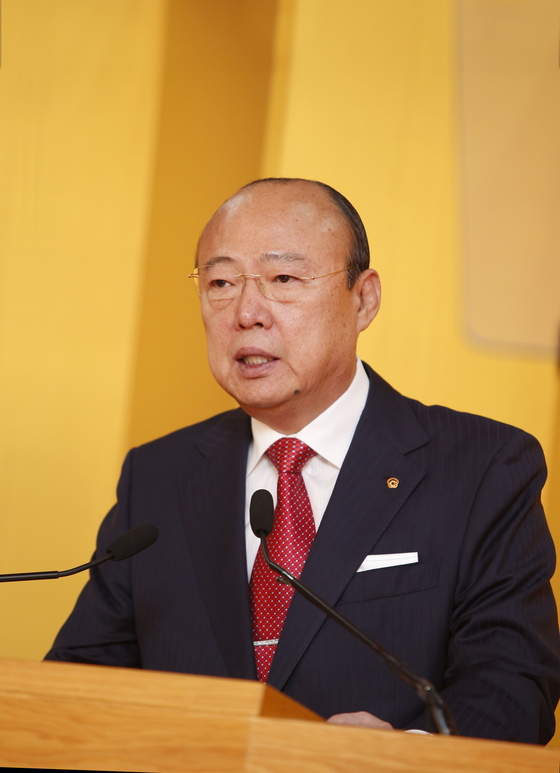 Hanwha Group’s Kim Seung-youn is returning to management, seven years after he was barred from all business activities when he was found guilty of embezzlement.

The conglomerate announced Friday that Kim would be appointed as a senior executive at Hanwha Corporation, Hanwha Solutions and Hanwha Engineering & Construction.

Kim will not be a registered board member, however, and will focus on the role of “developing new business opportunities and expanding networks overseas, rather than engage in everyday managerial decisions,” Hanwha explained.

Aerospace, defense and green energy are fields Kim will focus on to discover potential growth engines, the company added.

Despite leaving all chief executive roles in 2014, Kim has retained the title chairman, an honorofic title given to the head of a chaebol's owner family, but not necessarily the same as chairman of the board. That title will remain the same, Hanwha said.

A second-generation leader of Hanwha, Kim is the largest stakeholder in Hanwha Group with 22.65 percent.

In December 2014, Kim stepped down from CEO positions at seven Hanwha affiliates after being sentenced to three years in prison or five years of probation for breach of trust and embezzlement. He was charged with illegally diverting funds from healthy to low-performance affiliates.

Due to his sentence, he was forbidden to engage in business activities until Feb. 2021, although this ban did not affect his honorific chairman title within the group.

Domestic law states that people placed under probation for breach of trust can not return to management for at least two years after their probation is over. As Kim’s five-year sentence ended on Feb. 19, 2019, restrictions on his employment were lifted on Feb. 19 this year.

Local media reported that Kim’s return may accelerate the generation shift within the conglomerate. Kim’s three sons are currently working in managerial roles at Hanwha affiliates, but their stake at Hanwha Corporation remains small, at less than 5 percent.