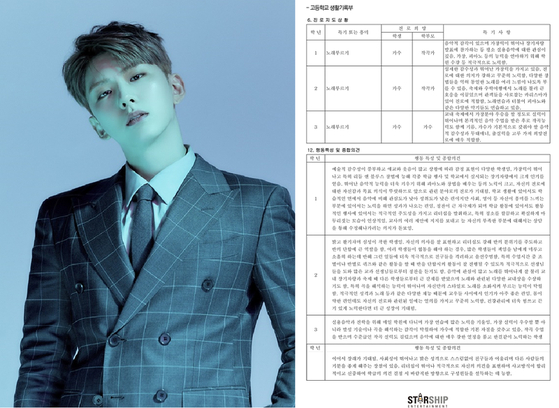 
Kihyun of boy band Monsta X uploaded an apology on his fan community on Friday after his name joined the growing list of celebrities accused of bullying their classmates in their school days.

“If it’s not too late, I truly want to sincerely apologize to those who have been hurt by my immature actions,” he wrote. “I’m sorry to have disappointed [everyone] and I will continue to live on [feeling] remorseful.”

According to the statement, the singer is said to have spent time “countlessly doubting myself, fearing that there’s a part of myself that I can no longer remember because of the time that has passed” after he was accused of bullying earlier this week.

While Kihyun admitted that he’s done things that he “shouldn’t have done as a student,” he did not directly clarify the bullying accusations in the statement.

The online commenter who claimed the singer was a bully said that he stole money and made the accuser buy him cigarettes.

Contrary to Kihyun’s apologetic statement, his agency Starship Entertainment uploaded his student record on the fan community and is reportedly collecting evidence from his former classmates and friends to prove that he was not a bully.

The agency added that they are planning to sue those who have repeatedly uploaded false accusations about the singer for defamation today.