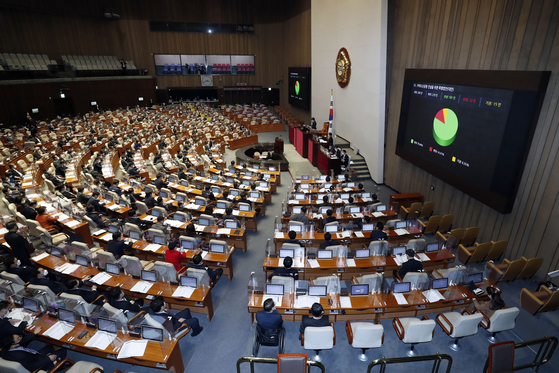 The National Assembly on Friday passes a bill to establish a special law to build a new airport on Gadeok Island near Busan. [YONHAP]


The National Assembly on Friday passed a plan, sponsored by the ruling party and pushed by President Moon Jae-in, to build a new airport near Busan just weeks before the country's second-largest city elects its new mayor next month.

The bill to establish a special law governing the construction of an airport on Gadeok Island was passed in the afternoon. Of the 300 members of the legislature, 229 attend the voting, and 181 supported the plan while 33 opposed and 15 abstained.

The passage took three months since 138 lawmakers of the ruling Democratic Party (DP) and 15 from the main opposition People Power Party (PPP) first sponsored the bill.

The special law was designed to expedite the process of building the new airport. According to the law, the government is allowed to skip a preliminary feasibility survey before starting construction. An environmental study to survey how the airport will affect the nearby area is still required.

The law also states the new Gadeok Airport will be financed by the state.

Ahead of the voting, four lawmakers took turns expressing their opinions on the plan. Reps. Jin Sung-joon of the DP and Park Soo-young of the PPP, who sponsored the bill, said the plan was designed to boost balanced development across the country.

Rep. Sim Sang-jeung of the Justice Party criticized President Moon for pushing the ruling party to pass the bill, supposedly in order to win votes for the party in the April mayoral by-election in Busan.

Rep. Kwak Sang-do of the PPP also said it is lamentable that the administration had overturned the previous Park Geun-hye administration's plan to expand the existing Gimhae Airport in Busan to push forward a populist pledge before the by-election.

Moon has been a strong proponent of the plan to build a new airport since his first presidential campaign in 2012. In November, the administration ditched plans to expand Gimhae International Airport in Busan, reversing the decision made by his predecessor Park.

A committee of experts appointed by the Prime Ministers' Office said at the time that the Land Ministry will reconsider the Gimhae Airport expansion plan. The committee said the plan requires major upgrades in safety control, facilities operation and environment and noise management. The plan also limits expansion in the future, the committee said.

Following the decision, the ruling party quickly revived a shelved plan to build an entirely new airport in Korea's southeast.

The idea of building a new southeastern airport dates back to 2006, when President Roh Moo-hyun promised to build the facility by 2025 with a capacity to handle 10 million passengers annually. Roh's successors Lee Myung-bak and Park also vowed to build a new airport in the region during their presidential campaigns, but both backpedaled in office. Feasibility studies were conducted by both administrations, and the presidents said they wouldn't push a plan that was so expensive and unnecessary.

When the Park administration pulled the plug on the project in 2016 based on a feasibility study by a French company, Gadeok Island off the city of Busan and Miryang, South Gyeongsang, had been the primary competitors for the new airport.

During his visit to Busan Thursday, Moon publicly reproached Land Minister Byeon Chang-heum for having submitted a report to the National Assembly that the ministry opposes the construction of a new airport on Gadeok Island.

"Although it is necessary that various ministries including the Finance Ministry cooperate on the new Gadeok airport, the Land Ministry must play a key role," Moon told Byeon. "In order to complete the construction before 2030, we need to work fast. The Land Ministry must assume a responsible attitude."

Moon also told Byeon that the ministry workers may feel perplexed that the direction of the project was changed. "I do understand their bewilderment, but the project won't progress smoothly if the ministry does not have willpower."

Earlier this month, the ministry submitted a report to the Land, Infrastructure and Transport Committee of the National Assembly expressing concerns about technical difficulties in building an airport on the island. The ministry also opposed the lawmakers' plan to establish a special law to build the airport, citing both legal and procedural issues.

In the report, the ministry said the Busan Metropolitan Government's plan to operate the new airport only for international flights, while using the current airport in Gimhae as a domestic airport, won't be effective. The ministry also said the construction on the island will take more than six years with many difficulties.

The ministry said it must oppose the plan to build a new airport on Gadeok Island because of these problems. "Not opposing it will amount to dereliction of duty, citied in the Article 122 of the Criminal Act," the ministry said. Supporting the plan will also amount to the violation of Article 56 of the State Public Official Act, which states that "every public official shall observe statutes or regulations, and faithfully perform his or her duties."

During his Thursday visit to Busan, Moon made clear that he wants the new airport. "As I saw the site of the new airport and listened to the presentation of developing a megacity [of Busan, Ulsan and South Gyeongsang], my heart is beating fast," Moon said. "We must realize this plan."

Land Minister Byeon apologized to Moon about his ministry's report to the National Assembly. "Once the bill is passed, we will do our best to propel the construction forward."

At any cost (KOR)