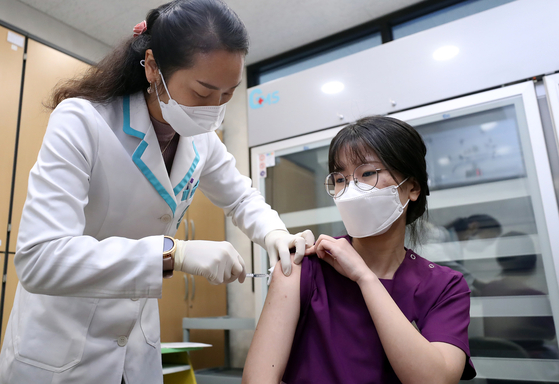 Lee Ha-yeon, 24, a nurse at an elderly care center, becomes the first person to receive a Covid-19 vaccination in Sejong on Friday. [KIM SUNG-TAE]


Korea on Friday kicked off its national Covid-19 vaccination scheme, the first step in the country’s plan to inoculate 70 percent of the population by November.

According to the Korea Disease Control and Prevention Agency (KDCA), the first AstraZeneca shots were administered from 9 a.m., with the goal of vaccinating 5,266 people on Friday under the age of 65 at 213 nursing homes and other high-risk facilities.

The first round of vaccinations will continue throughout March for a total of around 289,480 people, representing 93.7 percent of eligible residents and staff at high-risk facilities who had agreed to get vaccinated as of Thursday.

President Moon Jae-in visited a health clinic in Mapo District, western Seoul, to oversee the first vaccinations, and was briefed by KDCA Commissioner Jeong Eun-kyeong on vaccination procedures rolled out across the country.

No single person became Korea’s No. 1 Covid-19 vaccine recipient, as inoculations began simultaneously at health clinics and nursing homes throughout the country.

Kim Jeong-ok, 57, an administrator of an elderly health care center, was the first person to be administered a shot in Dobong District, northern Seoul. She told reporters she felt slightly nauseous after receiving the AstraZeneca vaccine at around 9:01 a.m. for around 15 minutes, but her symptoms soon disappeared.

“I have great hopes after hearing Britain’s daily infection count has dropped to a quarter [of levels before it began vaccinations] and that Israel is letting people take off masks from April,” she said.

“We have no choice but to have faith and vaccinate. I believe it will be fine.”

Other first recipients also bore witness to a smooth vaccination process. Kim Soon-hee, 57, a nurse who was first in line to receive a shot in Busan’s Haeundae District, said she felt less adverse effects from the AstraZeneca vaccine than a regular influenza shot, stressing there was no pain at all.

“Some may feel anxious about the vaccine, but I hope all citizens receive it,” she said. 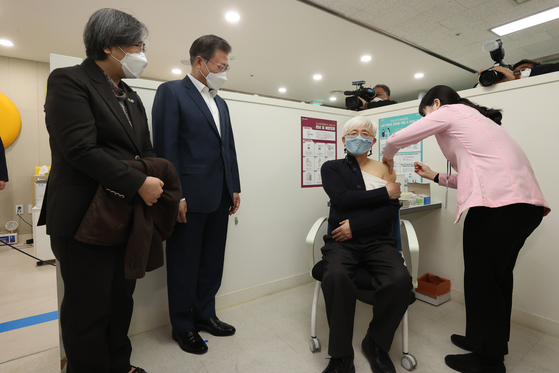 
The KDCA aims to get 70 percent of the population vaccinated by September and achieve herd immunity by November. Korea has sourced enough vaccines to inoculate a total of 79 million people, more than enough to cover its 52 million population, through individual contracts with five global drug companies — AstraZeneca, Pfizer, Moderna, Johnson & Johnson's Janssen and Novavax — and the Covax Facility mechanism.

The vaccines will be distributed to over 1,900 nursing homes and health centers across the country over the next four days.

This first batch of AstraZeneca vaccines is enough for 785,000 people, 35,000 higher than an initial estimate, and will be administered to patients and health care workers under the age of 65 at nursing homes, convalescent hospitals and other high-risk facilities.

The AstraZeneca vaccine requires a two-dose regimen before an individual is fully inoculated. While it is easier to transport and store than mRNA vaccines, like the ones from Pfizer and Moderna that require trickier ultra-cold chain storage, it needs to be stored at a regular refrigerator temperature.

The first batch of Pfizer vaccines, enough to inoculate around 58,500 people, also arrived in Korea Friday through a Korean Airlines flight that landed at Incheon International Airport. The vaccines, stored at temperatures below negative 75 degrees Celsius (minus 103 degrees Fahrenheit), were due to be delivered directly to five hospitals with cold chain storage across the country. 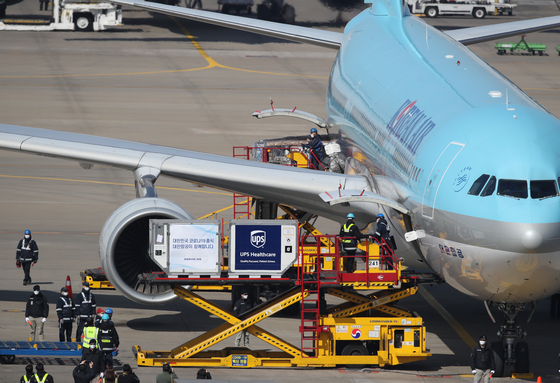 Korea's first batch of Pfizer vaccines, enough to inoculate around 58,500 people, arrives at Incheon International Airport on Friday morning. These vaccines were obtained through the Covax Facility. [YONHAP]


Officials said inoculations using the Pfizer vaccines would begin a day later on Saturday, to 300 health workers at the National Medical Center and other special government-designated treatment centers on the front lines in the fight against Covid-19.

Starting March 3, the Pfizer vaccines will be administrated at regional inoculation centers, then at 82 local clinics nationwide starting from March 8.

Vaccinations for around 55,000 medical workers treating Covid-19 is estimated to be complete by March 20, officials said.

While the country may have turned the corner with the rollout of vaccinations on Friday, health officials remain vigilant about mass infections.

Taking note of a continued daily infection count numbering in the hundreds, the government announced Friday it was extending the country’s current social distancing level by another two weeks starting Monday until March 14.

Greater Seoul remains subject to Level 2 regulations — the third highest level in a five-tier system — while the rest of the country has been at Level 1.5.

Under Level 2, cafes, restaurants, bars, including those that involve dancing, and noraebang (singing rooms) are allowed to operate from 5 a.m. to 10 p.m. every day. There are no operating time limits for other types of facilities including movie theaters, hagwons (cram schools), PC rooms, supermarkets or hair salons, though such businesses are still required to abide by health guidelines.

Health officials added that restrictions would continue, banning gatherings of five people or more, as well as maintaining capacity restrictions at most facilities.

The KDCA reported Friday 406 infections from the day before, marking a slight rise from the 396 tallied Thursday. A total of 382 of the new infections were local, while 24 were imported.