LG Electronics appears to have stopped its experimentation with unusual smartphone form factors, as it has reportedly suspended the development of its highly-anticipated rollable smartphone.

The news came after the Seoul-based electronics maker announced the decision to restructure its money-losing smartphone business last month.

Media reports said last week that LG had notified its Chinese panel supplier BOE to stop production of the rollable screens, which unfurl like a scroll.

“The notice appears to have been made entering this year, which coincides with the announcement to reconsider the phone business,” said a source in the display industry, who requested anonymity due to the sensitivity of the issue.

LG declined to comment about the speculation and any progress in the restructuring.

“There is nothing we can confirm with regards to the issue,” a spokesperson at LG Electronics said.

The company released a short video teasing the rollable smartphone under the name LG Rollable at CES last month, instantly making a splash among the media and tech enthusiasts.

Still, LG stayed mum about further details, including the timing of sales, although analysts predicted that sales could start within this year.

After a week, however, the company said in a statement that it “leaves open all possibilities to determine the future direction of its mobile communication [MC] division,” following media reports that it is attempting to sell off the smartphone division. 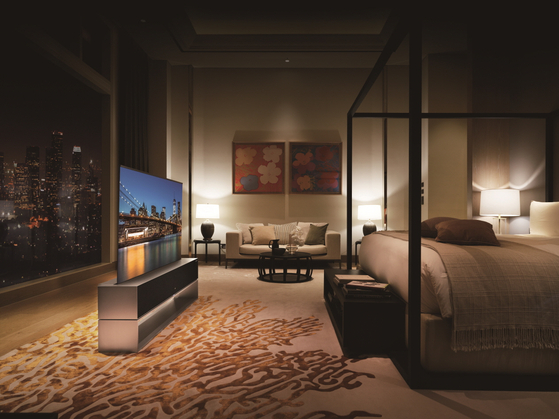 Local media outlets said that around 10 of the 65-inch LG Signature Rollable OLED R have sold in Korea since the release, a number that LG refuses to confirm.

Concerns surrounding its rigidity, alongside the hefty price tag of 100 million won ($89,000), could be off-putting for consumers, according to Yi Choong-hoon, head of display-focused market tracker UBI Research.

“The rollable TV model uses a substrate made of thin glass,” Yi said. “To make the display roll and unroll, LG has tried hard to make the glass substrate extremely thin.”

“But such a mechanically-complex structure could be susceptible to external pressure, which isn't as resilient as other organic light emitting diode(OLED)-based TV products,” he said.

But the researcher said that success should not be judged solely on the sales figure.

“The decision over whether the figure is disappointing or successful depends on how LG looks at the premium model,” Yi said. “The product is surely not designed for the masses and LG might consider the release as a symbolic showcase for future-centric technology.”

A spokesperson at the electronics maker acknowledged that the line-up is not intended for the mass market.

“We’ve positioned the rollable TV at the top-tier among other OLED TV sets,” the spokesperson said. “And this means the priority of the Signature R model is not to reach as many consumers as possible.”

The production of the high-end TV begins only after a confirmed order is received, since customers can switch color options or request customized engraving.

Global sales of the OLED R are not yet confirmed, according to the spokesperson.

Asked if a wider variation in size will be available in the future, the spokesperson struck a cautious tone.

“We won’t go the extra mile to expand the range of the model,” the spokesperson said. “We will do so only when demand is confirmed.”