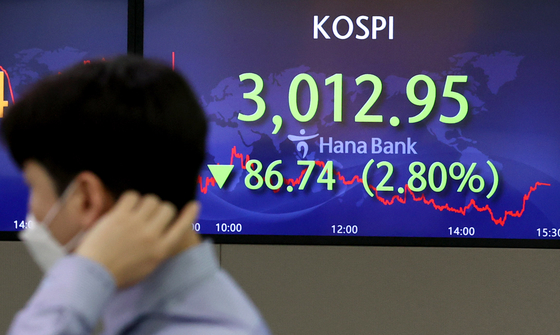 The Kospi closed at 3,012.95 on Friday, 2.8 percent lower than the previous day. However, there have been a huge influx of retail investors in hoping to cash in on the bullish rally since late last year. [YONHAP]


After landing a good job in 2018, Cho Geun-shik started investing half of his income in two mutual funds specializing in tech shares and overseas utility companies.

In March, Cho decided to return to the market -- but investing on his own. Getting in and out of funds was too cumbersome, especially with fast changes in the market.

When the benchmark Kospi showed signs of falling below the 1,400 mark in mid March, Cho bought shares in Naver and Kakao as well as prominent biopharmaceutical shares including Celltrion and Yuhan.

Cho started to sell shares when the Kospi broke the 3,000 mark for the first time on Jan. 7. Through the stocks that he sold, he was able to triple his investment.

While the equity market has seen a surge of retail investors as the Kospi even went as high as 3,208.99 on Jan. 25, fund managed by financial experts are seeing an exodus of customers.

Funds are losing their appeal due to their costs and mediocre performances.

Some customers are even rebelling against the idea that fund managers should be paid even when they suffer losses.

According to the Korea Financial Investment Association, investments in funds at the end of January were the equivalent of only 3.19 percent of the total market capitalization of the Kospi, a record low.

Fund investments fell sharply with the coronavirus pandemic. At the end of 2019, fund investments amounted to 4.83 percent of the Kospi’s total market capitalization.

Retail investors are investing directly instead of relying on fund managers.

Fund investment in Korea peaked in 2008 at 140 trillion won.

Other financial products such as demand deposits and equity-linked securities (ELS) have also been losing investors.

At the end of January, demand deposits at the five leading banks – KB Kookmin, Shihhan, Hana, Woori and NH Nonghyup – amounted to 637 trillion won. This was 9 trillion won or 1.4  percent less than in December.

ELS investments as of June last year were 52.7 trillion won, 3.7 trillion won or 1.4 percent less than the same period a year earlier.

On the flip side, investor deposits at brokerages increased from 27.4 trillion won to 65 trillion won in the same period, or 137 percent, as retail investors started investing directly in the equity market.

The key reason for the shunning of mutual funds is their relatively weak performances.

Six saw losses even as the market gained. 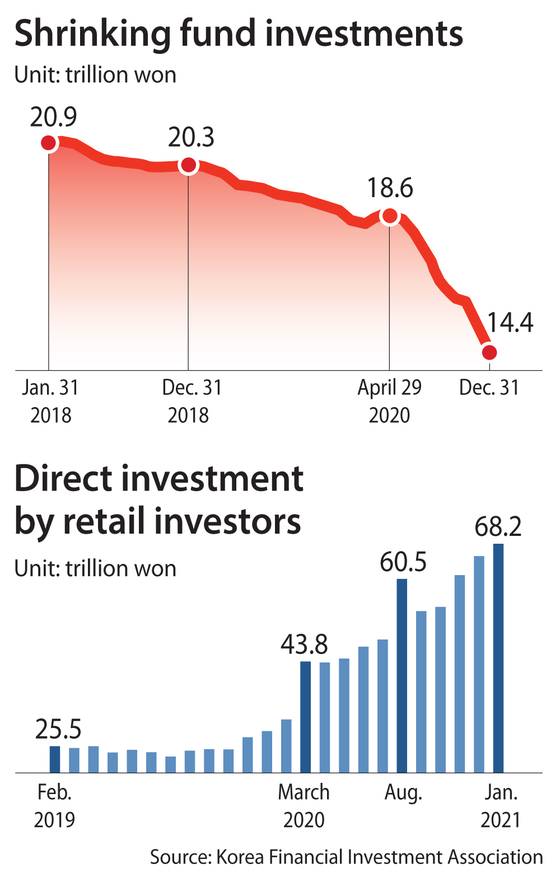 The value of IT and biopharmaceutical shares rose sharply between April and August; chemical and battery shares thrived between September and October; and semiconductor and automotive shares rose in November and December. Many funds failed to get on those bandwagons.

Of course, funds are heavily restricted as to the type of shares they can invest in, as well as other factors related to risk management.

“Public funds have to have stable shares, and because of this, they can fall far below the market yield and can't react quickly to a market situation,” said Kim Jung-soo, managing director of Ark Impact Asset Management. “Even if some of the small and midsize caps [ in the fund] see prices surge, because the portfolios are mostly centered on large caps, which backs up [the funds’] liquidity, it has little impact on the overall yield.”

In a survey by the Korea Financial Investors Protection Foundation, 27 percent of 2,500 people aged between 25 and 64 said they weren’t interested in funds because of the low returns and because direct stock investments were more appealing.

Only 22 percent said they were investing in funds, a sharp drop from 35 percent in 2019.

The costs of investing in funds is another factor for investors losing interest.

The total expense ratio (TER) on local funds is between 1.26 and 1.68 percent. That’s double the size of the TER of funds in the U.S.

The total expense ratio is the ratio of costs generated from managing a fund to its net assets. The higher the ratio, the higher the cost to investors.

Another undeniable factor is mistrust of funds after recent scandals surrounding derivative-linked securities (DLS) and the Lime and Optimus funds.

The scandals raised questions about the institutions that sold such products including Hana Bank and Woori Bank and their lack of morale accountability.


Analysts say asset management companies shouldn’t be evaluated on their short term performances as they usually manage a fund for the mid-to-long term, around three to five years.

“If the portfolio focuses only on profits, it’s difficult to attract the investment of institutional investors, which accounts for a minimum of 80 percent [of the investment pool],” said an asset management company official, who requested anonymity. “While  retail investors, who’ve only experienced bullish times, think the funds are incompetent, their ability to handle crisis when the market crashes is important.”

“Funds are like a bus or a train that runs on a decided track while loading many customers,” said Min Joo-young, a managing director for retirement pension consulting at Kiwoom Asset Management. “Direct investment, on the other hand, is like a passenger car that goes anywhere freely with only one or two passengers.

“By nature and purpose, these are entirely different. And because of that, it’s hard to compare the two on yields alone, and not the ability to avoid risk.”

Another factor that has an effect is the disappearance of talented fund managers in recent years.

“Three to four years ago, investors were leaving funds and, as a result, the compensation of fund managers was downsized, which started a vicious cycle,” said Min of Kiwoom.


To restore the popularity of fund investment, the Financial Services Commission introduced measures last month including changing the compensation system for fund managers according to their performances quarterly.

Until now, fund managers were compensated when their fund were redeemed.
The change is expected to allow managers to be more aggressive in their management of funds.

Additionally, the government is relaxing regulations in a way that will allow the funds to quickly change their investment portfolios, particularly smaller funds.

Many in the financial industry said the government should have come up with more aggressive plans including tax benefits and long-term support measures.

“Because the variety of investment products is increasing and share prices have been rising, interest in funds is likely to get lowered,” said an official in the financial industry whoh requested anonymity. “The government came up with measures but it failed to discuss the most important issue, which is tax.”

In 2004, the government generated  nationwide interest in funds through tax exemptions, including income tax exemptions on dividend payment on investments in equity funds with a ceiling at 80 million won.