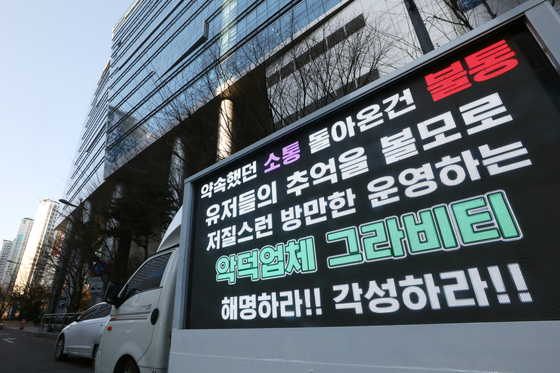 A truck is stationed in front of Korean game publisher Gravity’s headquarters in Mapo District, western Seoul, on Feb. 2, with angry messages from users of the company’s mobile game Rognarok Origin. [NEWS1]

An old controversy in Korea’s game industry over “loot boxes” is getting serious as the government threatens to regulate the practice once and for all.

The game industry is fighting back, saying it would prefer self-regulation to legislation. Some players support the crackdown, believing that game publishers have long abused their trust.

A loot box is a common feature in both PC and mobile games. Users pay to draw game items like weapons or armor from a loot box. The prize may be worth several times what they paid for the draw -- or worth close to nothing at all.

The problem occurs when players start drawing multiple times to get their hands on items they want, which some say becomes a form of gambling. Although game publishers officially ban the practice, rare items are often traded online in exchange for cash.

On Feb. 24, lawmaker Lee Sang-heon of the ruling Democratic Party and 16 others submitted a bill for review by the National Assembly’s Culture, Sports and Tourism Committee, a first step in the legislation process.

Drafted with the Ministry of Culture, the bill suggests a long list of reforms to the Game Industry Promotion Act, including what could be the first legal definition of a loot box. Another clause would force game publishers to disclose details of loot boxes, like what items the players can expect in them and the odds of items appearing.

“A score of Korean games use this model to encourage spending,” Lee said in a Feb. 18 statement addressing the game industry’s complaints about the bill.

“They designed games where loot box gains make a big differences in the speed of progress and competition among users. […] The game industry was given many opportunities to voluntarily resolve this issue but its practices failed to meet users’ expectations.”

Loot boxes are a widespread revenue source for game companies. Their history traces back to Korean game publisher Nexon’s massively multiplayer online role-playing game (MMORPG) MapleStory. The feature was first launched in Japan in 2004 and was implemented in Korea the next year.

In a self-regulatory move, K-Games, a lobbying group for Korea’s game industry, has encouraged members since 2015 to share the percentage of players winning an item that can also be paid for. Companies that do not go along have their names publicly posted on a website.

Gamers question the credibility of such disclosures and accuse game publishers of arbitrarily changing percentages or not fully sharing figures.

An online Blue House petition posted this month claimed that game developers intentionally complicated the model of loot boxes to avoid sharing accurate percentages. For example, instead of granting one item per one loot box, games sometimes make users draw from two loot boxes to win a single item and only disclose the winning probability for one of the two.

“The amount of information given to customers is significantly low compared to what game publishers have,” the petition said, and asked that all information about the game playing experience should be disclosed.

“Unless companies choose to share it, users have to constantly pay for and consume products without knowing what they’re going to get. It’s a fundamentally unfair practice widespread in the game industry.”

Major game companies Nexon and NCSoft have also come under fire recently for loot box-related issues. Asking for more clarity on how game publishers run their games, some players sent “protest trucks” to park outside companies' headquarters earlier this year, with angry messages written on electronic boards. Both large and small companies saw the trucks outside their buildings.

“The gaming industry and the number of users have grown so big over the last few years, I think we’ve reached a point where the issue of loot box features can’t go unaddressed,” said an anonymous industry source.

K-Games released its counterargument to the proposed law on Feb. 15, saying the reforms will force companies to share confidential “trade secrets.”

“We expected a reform bill that would update the law adjusted to a rapidly changing game industry, but in reality, the plan seems to lack the opinions of industry insiders,” the organization said. “It raises concern that the bill seems to be focused on enforcing regulations instead of boosting the industry.”

Analyst Sung Jong-hwa of eBest Investment & Securities said the the industry's argument has a point, as probability in the loot box feature has a business value on its own. The rarity of items in the loot box, their functions and the outcome of combining different items are essential elements in a game that decides how well it was made. However, most analysts say the disclosure of probabilities won’t affect game publishers’ revenues.

“Heavy users pay for rare game items knowing the possibilities are slim—disclosing numbers won’t have much effect on their purchase decisions,” Sung wrote in a Feb. 23 report.

Some experts say the real problem is caused by foreign games that don’t abide by domestic rules.

According to K-Games’ January report, 99.1 percent of local publishers disclosed the probability figures for loot box items that month, whereas only 59.2 percent of overseas publishers present in Korea did so.

“There is a limit to the industry organization forcing a domestic rule on foreign game companies, but that could be a reason for domestic firms to feel discriminated against in a way,” said Oh Dong-hwan, a Samsung Securities analyst.

As for other countries, China has obligated disclosure of probabilities for loot box items since 2017. Belgium banned loot box features in video games for good in 2018. Discussions in the U.S., Europe and United Kingdom are ongoing as well in favor of regulating loot box practices, according to lawmaker Lee.

“The reform bill only asks for what was a self-imposed practice to be legislated,” he said. “This may be the last chance to change perceptions of the local game industry.”