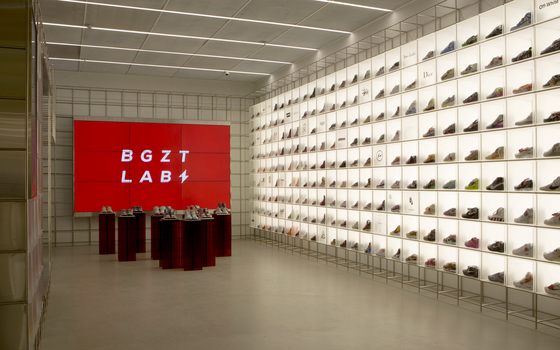 
While shares and bitcoin have become popular ways to earn money, young Koreans have another way: reselling sneakers.

The resale market, selling new or near-new exclusive secondhand items for a profit, is booming in the demographic.

Online secondhand market Bungaejangter opened its first offline store, Bgzt Lab, at The Hyundai Seoul department store in Yeouido, western Seoul on Friday. In the 119-square-meter (1,280.9-square-feet) store, some 216 sneakers, which are loosely called “legend sneakers” by sneaker fans, are displayed on the wall of the store.

At the center of the store, 12 of the most expensive and valuable sneakers are on display. Those include Nike Dunk SB Low NYC Pigeon, which is now trading at about 77 million won ($68,500), Nike Air Yeezy 2 Red October that is trading at some 16 million won, and Nike Mars Yard 1.0, which is worth of some 14.5 million won. Those shoes originally sold for around 200,000 won. 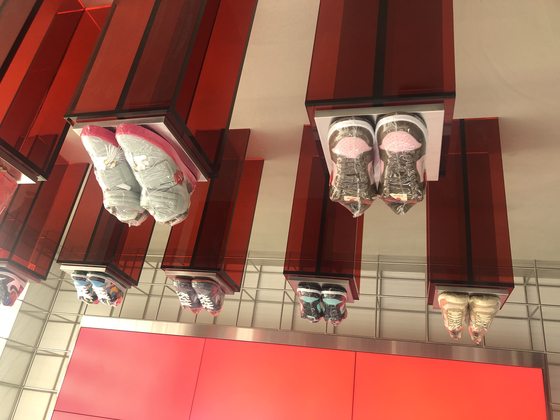 In Bgzt Lab, many limited-edition sneakers are on display which cost tens of millions of won. [YOO JI-YOEN]


Younger people are the target audience for Bungaejangter's offline store. They are willing to stay up late and bring their friends and even family members to wait in front of designer brand stores to get their hands on exclusive items so they can sell them at a higher price later.

Reselling sneakers first went viral in Korea in 2019 when a pair of Nike Air Force 1 Para Noise sneakers, worn by K-pop star and fashion icon G-Dragon, was sold for 13 million won ($10,600) online, 60 times its original price. It was originally priced at 219,000 won.

People must win a raffle to get a chance to buy those limited-edition sneakers.

Last year, Nike collaborated with luxury brand Dior and came up with Air Jordan Dior 1. Only 8,000 pairs were available, and more than 5 million people around the globe entered the raffle, according to Dior.

As demand rises, companies are scrambling to come up with related apps that can attract customers. 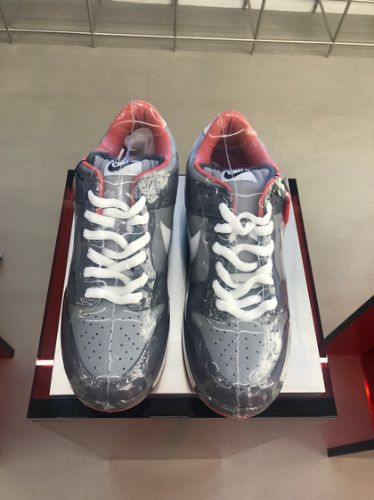 
About six months later, local shopping platform Musinsa also introduced similar service Soldout. Those platforms are intermediaries for deals between seller and buyer to distinguish counterfeit from the original, to conduct the quality tests and to offer delivery services.

According to Xxblue, the number of registered customers on the app hit 230,000.

Soldout has been opening a “Weekly Raffle” every week since December and its cumulative entries reached some 500,000 so far.

According to Xxblue, over 80 percent of its customers are people in their 20s and 30s. People aged between 25 to 35 are the majority.

Some sneakers have been treated as works of art.

Nike Air Jordan 1, worn by basketball superstar Michael Jordan, has been sold for $560,000 at a Sotheby’s auction in May last year, the highest auction price for a pair of sneakers.