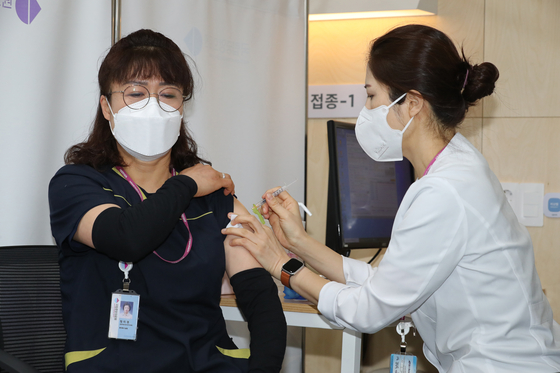 Jeong Mi-kyeong, left, a 51-year-old sanitation worker at the National Medical Center in central Seoul, is the recipient of the first Pfizer shot administered in the country at 9:04 a.m. Saturday. [YONHAP]


The first Pfizer vaccines were administered to frontline Covid-19 medical workers over the weekend without major hitches, and over 20,000 people were inoculated in the first two days of the country's vaccination program.

On Saturday, the first Pfizer jabs were administered to 300 health care and administrative workers at the National Medical Center and other government-designated treatment centers for Covid-19 patients. Another 200 frontline medical workers were to receive Pfizer shots Sunday.

The first AstraZeneca shots were administered Friday, beginning with patients and health care workers under the age of 65 at nursing homes and other high-risk facilities.

Health authorities Sunday said 20,322 people received their first Covid-19 vaccine shots as of Saturday, or 0.039 percent of the country’s total population of 52 million. Of these shots over two days, 2,417 were administered in Seoul, 4,067 in Gyeonggi and 3,274 in Gwangju.

The Central Disease Control Headquarters said Sunday that there were 112 cases of adverse reactions to the vaccine reported as of Saturday midnight, of which 111 were for the AstraZeneca vaccine and one for Pfizer’s.

All were mild reactions such as headache, fever, nausea and vomiting, which are common after vaccinations. No cases of serious adverse reactions such as anaphylaxis, or a severe allergic reaction, have yet been identified.

There were 15 cases reported on Friday and 97 on Saturday, or which 96 were for the AstraZeneca vaccine.

Jeong Mi-kyeong, a 51-year-old sanitation worker at the National Medical Center in central Seoul, was the recipient of the first Pfizer shot at 9:04 a.m. Saturday with Prime Minister Chung Sye-kyun, medical professionals and media looking on.

While Jeong looked slightly nervous ahead of the shot, she told Prime Minister Chung afterward, “I think everybody should get shots. I feel so relieved after getting the shot.”

She said that the Pfizer jab “hurt less than the influenza shot,” adding she looks forward to a day where, “we can take off our masks and travel overseas.”

“The first step in the journey toward recovering our daily life has been taken,” said Prime Minister Chung. “We will take care so that all citizens can receive vaccinations without anxiety."

The first batch of the vaccine developed by U.S. pharmaceutical giant Pfizer and Germany’s BioNTech, obtained through the World Health Organization’s Covax Facility mechanism and enough to inoculate around 58,500 people, arrived Friday on a Korean Air flight that landed at Incheon International Airport.

The vaccines, stored at temperatures below negative 75 degrees Celsius (minus 103 degrees Fahrenheit), were delivered to five hospitals with cold chain storage across the country.

Starting March 3, the Pfizer doses will be administrated at regional inoculation centers and will be expanded to 82 local clinics nationwide from March 8 as the country prioritizes vaccinating some 55,000 frontline Covid-19 medical workers.

There are over 310,000 patients and health care workers under the age of 65 at 5,813 nursing homes, convalescent hospitals and other high-risk facilities eligible for the AstraZeneca vaccines.

No single person was designated as the first person to receive the AstraZeneca vaccine on Friday. Instead, health authorities described various people who received the first jabs at nursing homes and local health care centers nationwide as the No. 1 recipient.

AstraZeneca vaccines for 200 people arrived around 10:20 a.m Sunday at a naval base on remote Ulleung Island in the East Sea, transported by an Air Force Boeing CH-47 Chinook helicopter. The vaccines, supervised by the police and military, were brought to the Ulleung public health care center. 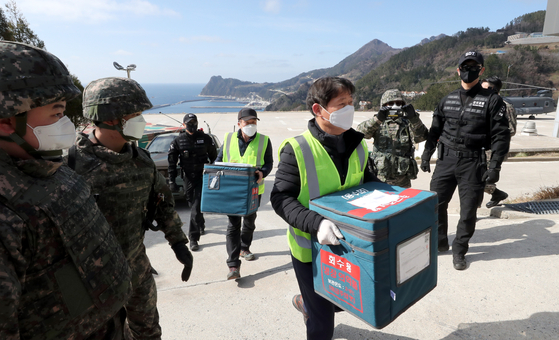 Local officials, escorted by the military and police, transfer AstraZeneca vaccines transported to a naval base on the remote Ulleung Island in the East Sea on the Air Force’s Boeing CH-47 Chinook helicopter Sunday. [NEWS1]


Health authorities issued guidelines allowing medical staff to maximize the number of shots per vaccine vial by utilizing locally developed low dead space (LDS) syringes designed to minimize wasted doses by reducing the space between the needle and the plunger.

A vial of AstraZeneca's vaccine is estimated to provide 10 shots, while Pfizer’s provides six.

With the LDS syringes, the health officials estimate a vial of the AstraZeneca vaccine can provide shots for up to 12 people and seven from a Pfizer bottle. PoongLim Pharmatech, Shina Corp. and Doowon Meditec are local LDS syringe manufacturers.

Korea aims to get 70 percent of the population vaccinated by September and achieve herd immunity by November. Korea has sourced enough vaccines to inoculate a total of 79 million people through individual contracts with five global drug companies — AstraZeneca, Pfizer, Moderna, Johnson & Johnson's Janssen and Novavax — and the Covax Facility mechanism.

Despite vaccinations finally kicking off, health authorities warned it is too early to let down our guard as herd immunity will take some time and daily infections are still occurring. 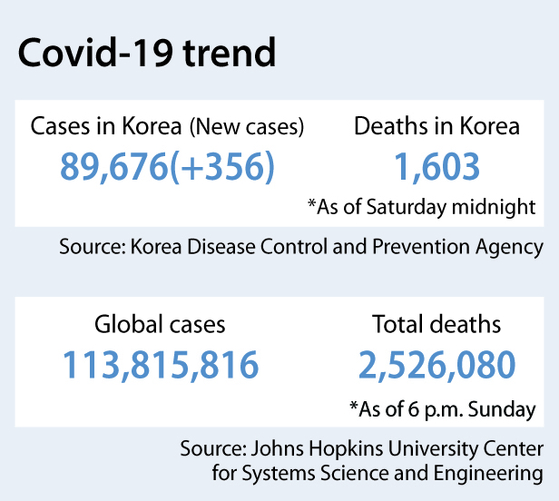 Of local infections, 117 cases were in Seoul, 139 in Gyeonggi, 13 in Incheon, 14 in Gwangju and 10 in North Chungcheong, with infections at industrial plants, medical facilities, cram schools and nursing homes.

There were 22 more imported cases from overseas, including six from Europe, five from Africa and four from the United States.

The government said Friday it will extend the country’s current social distancing regimen by another two weeks from Monday to March 14, despite earlier hopes that the restrictions could be eased.

The greater Seoul area remains subject to Level 2 regulations, the third highest level in a five-tier system, while the rest of the country has been at Level 1.5.

Under Level 2 guidelines, restaurants and cafes can operate until 10 p.m. in the greater Seoul area. There are no operating hour limitations for other types of facilities including movie theaters, hagwon (cram schools), PC rooms, supermarkets and hair salons.

Health officials added it will continue bans on gatherings of five people or more.

The Seoul Metropolitan Government said it will continue to run its 26 free Covid-19 testing centers, aimed at tracing silent transmissions, until social distancing regulations are lowered to Level 1.5.

The new school year starts this week, with younger elementary students expected to attend physical classes daily, which could also lead to more mobility and greater risk of new infections.