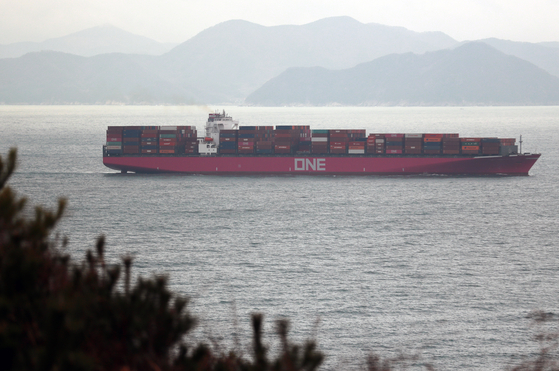 A cargo ship on the shores of Busan on Feb. 1. Korea's export have increased for the fourth consecutive months, signaling a recovery. [YONHAP]

This came despite more public holidays and a shorter month this year.

According to the Ministry of Trade, Industry and Energy on Monday, Korea’s export in February totaled $44.8 billion.

Exports have been growing year-on-year since November last year. It is the first time in nearly three years in which Korean exports have grown for four consecutive months.

Exports grew for 17 consecutive months between November 2016 and March 2018. That ended when exports shrunk 2 percent in April 2018.

Imports rose 13.9 percent to $42.1 billion. Imports have been growing for the last three months, indicating a recovery in the Korean economy.

Imports of intermediate and capital goods have been especially strong.

Korea achieved a $2.71 billion trade surplus last month. February was the 10th consecutive month in which a trade surplus was recorded. 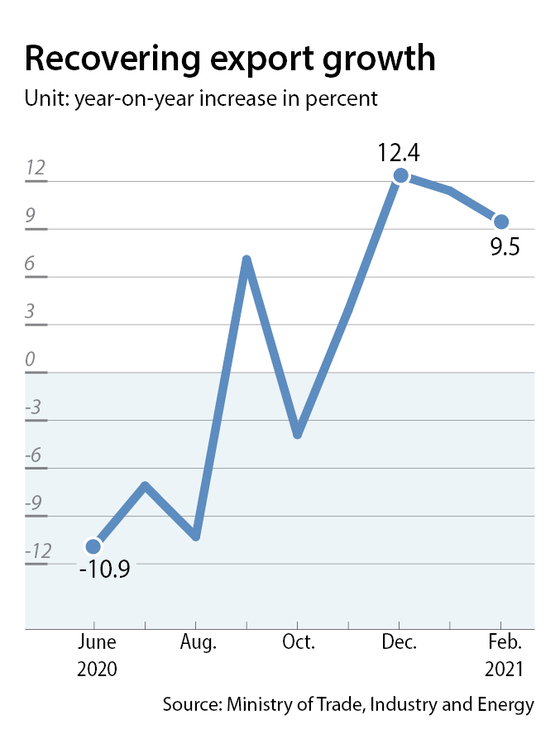 The export of semiconductors, which accounts for the largest portion of overall exports at 19 percent, grew 13.2 percent year-on-year to $8.4 billion. Computer chip exports have been rising for eight consecutive months.

Exports of other tech products have been growing fast, including those of displays, mobile telecommunication devices, which includes smartphones, consumer electronics and fuel cells.

Display and mobile telecommunication equipment exports were helped along by the introduction of new smartphones and the continuing demand for non-face-to-face technologies amid Covid-19.

Fuel-cell demand has been strong, especially in the U.S. The Joe Biden administration’s shift toward environmentally-friendly policies has been considered a favorable factor that has also led to the increased demand for EVs.

Fuel-cell exports have been increasing for six consecutive months.

One of the noticeable changes in recent months is the increase of exports of petroleum-related products.

This was largely the results of increase in crude prices and global demand.

Exports to these three regions have been growing for four consecutive months.

Exports to China, which is Korea’s biggest export market, grew 26.5 percent year-on-year to $11.2 billion. Exports to China have been growing more than 20 percent for two consecutive months.

Exports to the U.S., which is Korea’s second-largest export market, grew nearly 8 percent to $6.4 billion.

Exports to Europe jumped 48.2 percent to $4.8 billion. It was the biggest year-on-year jump in nearly four years. The last time exports to Europe grew at this rate was in April 2017, when they expanded nearly 65 percent.

“There’s a growing expectation of a recovery in the global economy and trade,” said Minister Sung Yun-mo. “However, it is true that uncertainties still remain, such as the prolonging of Covid-19 and the spread of protectionism.”

Minister Sung added that the government will continue to support local exports through deregulation and export finance.

“The related government departments will hold a strategic trade meeting in March to come up with measures that will solidify [Korea’s] export growth,” Sung said.