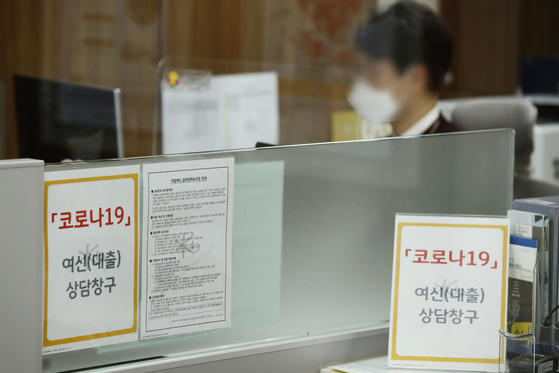 Loan rates at commercial banks are starting to rise, which could further stress borrowers amid the lingering effects of Covid-19 on the domestic economy.

The increase in interest rates is seen as the result of recent restrictions on household loans and the increase in U.S. Treasury rates.

Concern over inflation due to growing expectations of a global economic recovery from the pandemic is increasing the volatility of interest rates.

According to the financial industry, the unsecured loan interest rates of the four leading banks – KB Kookmin, Shinhan, Hana and Woori – as of Feb. 25 was between 2.59 and 3.65 percent. That’s a minimum 0.6 percentage points higher than at the end of July last year, when it was between 1.99 and 3.51 percent.

The household loan interest rates have also been rising fast.

The average interest rates on fresh loans in August last year was 2.86 percent. As of January this year, it had risen 0.8 percentage points to 3.46 percent.

Mortgage rates in January rose to their highest levels in a year and a half to 2.63 percent. The last time they were at this level was in July 2019, at 2.64 percent.

Industry officials say one of the key factors that contributed to the rise in interest rates was government pressure on commercial banks to reduce household loans late last year.

The banks had no choice but to either lower the maximum limit on the loans that customers can borrow or lower the rate.

“Early last year, interest rates went down as there was fierce competition among banks on loans,” said a bank official, who requested anonymity. “However, currently the banks no longer compete due to pressure from the financial authority. Naturally, interest rates are raised.”

The rising expectation on inflation is affecting Treasury yields, which are in turn affecting loan rates.

The 10-year U.S. Treasury as of Feb. 25 broke 1.5 percent, for the first time in a year. Early January, Treasuries were yielding about 1 percent.

As government bond interest went up, other bonds, including those from banks used in securing the capital needed to make loans.

The interest rates are expected to rise further as governments around the world are increasing liquidity in hopes of an economic recovery. On Feb. 27, the U.S. House of Representatives passed the Joe Biden administration’s economic stimulus package of $1.9 trillion.

The Korean government is already working on the first supplementary budget of the year, which is estimated around 20 trillion won. The government will announce details on March 2.

“With the issuance of government bonds, [Korea’s] sovereign ratings will be dropped and this will raise loan interest rates,” said Sung Tae-yoon, Yonsei University economics professor.