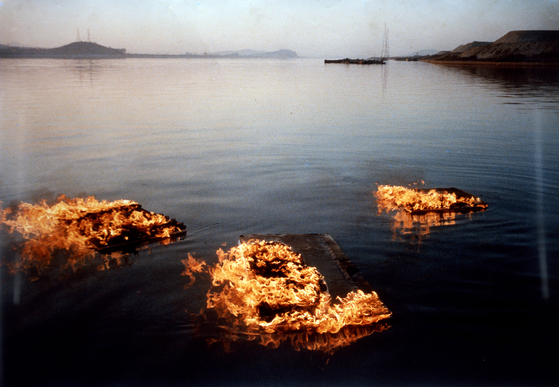 “Burning Canvases Floating on the River,” first performed in 1964 and recreated in this 1988 photo by Lee Seung-taek, the pioneer of Korean avant-garde art. The photo is included in the book ″Korean Art from 1953: Collision, Innovation, Interaction″ and is also on view now at the MMCA Seoul as part of Lee's retrospective .[MMCA]


Just as there are foreign fans of the boy band BTS who started studying the history of general Korean pop music, there are foreign art lovers who have become interested in Korean modern and contemporary art history thanks to some world-renowned Korean artists such as Haegue Yang, Kimsooja, Lee Ufan, Lee Bul and Do Ho Suh.

However, there are few books in English that provide a comprehensive guide to Korean art in the 20th and 21st century, whereas there are books and catalogues on individual artists and specific movements such as Dansaekhwa, or Korean monochrome paintings. Because of this, the publication of the book “Korean Art from 1953: Collision, Innovation, Interaction” by Phaidon, one of the world’s top art book publishers, last March was welcome rain in a drought.

The authors “assembled a thrilling history surveying Korea’s art scene as it responded to a number of political factors, from the violence wrought during the Korean War to calls for democracy that reached a fever pitch with 1980’s Gwangju Uprising,” wrote Alex Greenberger, senior editor of ARTnews. The New York-based art magazine picked the book as one of “The Best Art Books of 2020.”

“The U.S. is on the cusp of seeing major surveys of Korean art at the Los Angeles County Museum of Art and the Guggenheim Museum in the coming years, and when those shows finally do happen, this book will serve as an essential resource to have on hand,” Greenberger added. 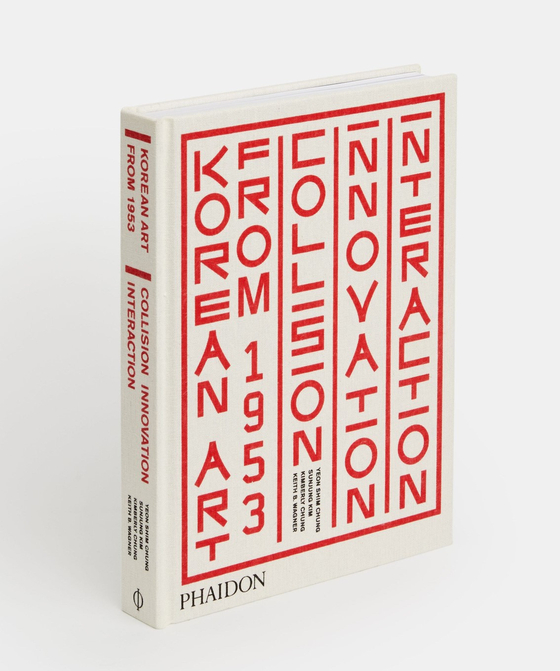 The cover of the book “Korean Art from 1953: Collision, Innovation, Interaction.” [PHAIDON]


Earlier in June, art critic Jason Farago also left a favorable review which was published by the New York Times, saying, “Lavish yet scholarly, this book is more than an important new chapter of an emerging world history of 20th-century art; it’s a vital artistic genealogy of our planet’s current cultural powerhouse [Korea].”

“Korean Art from 1953” provides more than 400 pictures of works in full color. along with in-depth articles written by the editors and other experts, offering a full view of Korea's modern and contemporary art history. Its cover, designed by the London-based studio Mues Design, on which the English title is written in characters reminiscent of the old script of hangul, or Korean alphabet, also attracted attention.

In order to get a better understanding of the context of the book, the Korea JoongAng Daily sat with Chung Yeon-shim, one of the four editors, at a café in Itaewon, Seoul, last month.

Chung, now professor of Art Theory and Criticism at Hongik University, received her Ph.D. in art history at New York University. Before teaching at Hongik, she was an assistant professor at the Fashion Institute of Technology in New York. She also worked as one of the curators for the 2018 Gwangju Biennale.

The following are edited excerpts from the interview with Chung. 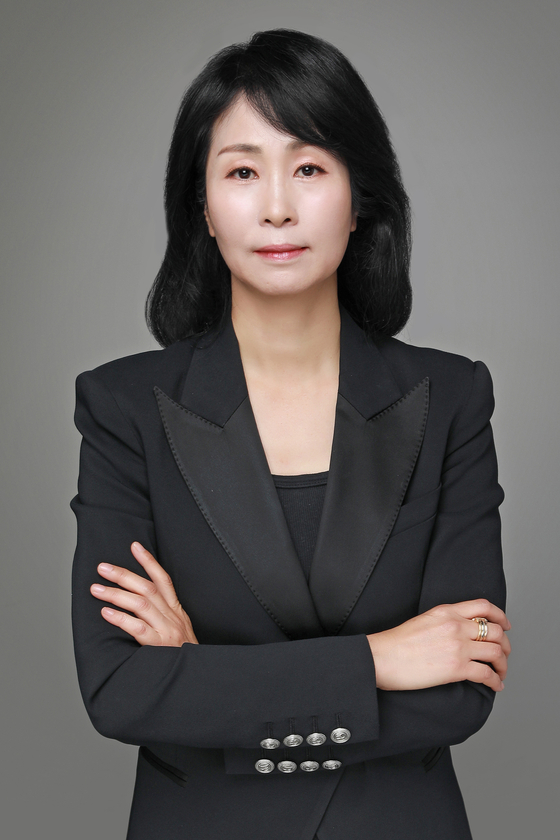 
As the title suggests, this book features Korean art from the year 1953, when a truce was agreed on and the Korean War ceased. Why didn’t you start from the late 19th century or the Japanese colonial period (1910-45)?

It is very difficult to make chronological divisions in Korean art history, because it has hybrid qualities with pre-modern, modern and contemporary elements co-existing simultaneously due to the country’s compressed economic and cultural growth.

We editors discussed the starting point seriously and concluded that the book would become too massive, if we started from an earlier period such as when Western paintings were first introduced to Korea. As for art in the colonial period, the book in fact briefly deals with it in Chapter 1, focusing on the conflicts between traditional and modern, between generations, between figurative and abstract art.

Conflicts, which would inevitably accompany Korean artists’ identity crisis and have appeared through the country’s art history, are the concept that penetrates this book. So ‘conflicts’ was in the title and was changed into ‘collision’ on the suggestion of the publisher Phaidon.

We could have named the book “Korean Art from 1945,” but there are already Western art history books that start from the end of the World War II. In addition, Korea has special history in which the ideological conflicts peaked in all the fields including the art world between the 1945 liberation from the Japanese colonial ruling and the 1950-53 Korean War. To suggest the unique history distinguishable from that of the West, we have titled the book “Korean Art from 1953.” 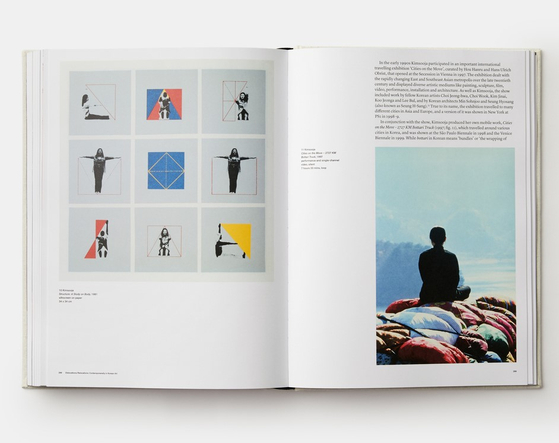 Pages that feature pictures of works by artist Kimsooja from the book “Korean Art from 1953: Collision, Innovation, Interaction.” [PHAIDON] 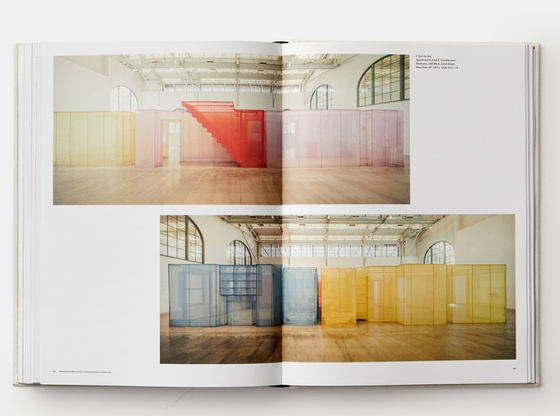 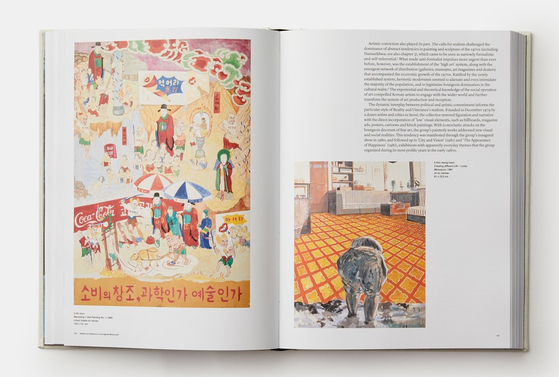 
One of the most interesting parts of the book is the chapter about experimental art and collective groups in the 1960s and 70s. Can we say that Korean modern art, which had previously followed after Western art, began to progress side by side with Western art from this point?

Partly yes, partly no. We can confidently say that Korean art has been moving side by side with Western art in the 1990s and 2000s, with the year 1988 [when the Seoul Olympics took place] as a turning point for globalization, and has even been partly preceding Western art in recent years.

On the other hand, in the 1960s and 70s, only a few Korean artists and art critics had access to information about new trends of Western art. Instead, they would diligently share and study the limited information very thoroughly. When I had an interview with artist Lee Seung-taek [the now 88-year-old who pioneered avant-garde art in the 1950s and 60s with installations and performances and emerged under international spotlight in the recent years], he said he was more influenced by the Neo-Dada movement that he saw in Western art magazines than the figurative sculpture classes he had to attend at university.

While Neo-Dada and Neo-Avant-Garde movements in the West pursued subversions not only in aesthetics but also in politics, Korean avant-garde artists in the 1960s and 70s were not very political under the military regime. This has been criticized as their limits in particular by Minjung artists in the 1980s [who focused on social realist paintings with clear messages against the military regime.] However, in the conservative and rigid culture of the military regime in the 1960s and 70s, it was not easy to pursue artistic subversions. Artist Kim Ku-lim [the 84-year-old artist who was another important figure in the Korean avant-garde movement in the 1960s and 70s] was arrested without a warrant during a street performance. I think their activities made cracks not only in art but also in society. They should be appreciated.


The book also deals with North Korean art in the 1950s and 60s, which is a rare and fresh attempt in a book about Korean modern and contemporary art. Do you have any plan to publish a new edition with an extended part on North Korean art?

We editors looked for a researcher in North Korean art who could provide an in-depth survey in specific fields of North Korean art rather than a general survey. It was really hard and we finally found a thesis written by art historian Hong Ji-suk about how North Korean art was developed after the division, including the establishment of Joseonhwa [landscape paintings on the tradition of old Korean ink paintings of mountains and water] and introduction of photography. The chapter in this book is based on the thesis. Of course, we’d like to find a researcher on North Korean art in the 1970s, 80s and 90s and to add to the book, but it will take time.