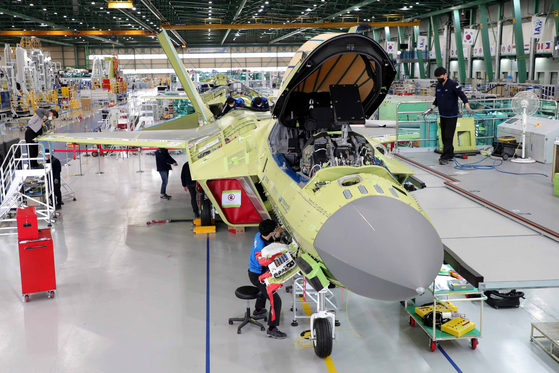 
A nearly completed prototype of Korea's first indigenous fighter jet was unveiled to the media in Sacheon, South Gyeongsang on Wednesday ahead of its official rollout in April.

Jung Kwang-sun, chief of the Korea Fighter Experimental (KF-X) project of the Defense Acquisition Program Administration (DAPA), said the first domestically produced fighter jet will be a “landmark moment” for the country and its aerospace industry.

Missing only its grey painted finish, the yellow-green prototype with the name “KF-X 001” stamped on its tail wing was shown to the media in KAI’s cavernous factory, in a space as large as three football fields.

Production was accelerated by the use of a fuselage automated splice system (FASS), a type of automated guided vehicle (AGV) with 11 lasers to align front, central, and rear fuselages. KAI is the second company in the world after Boeing to use FASS in its assembly process.

KAI plans to produce a total of six more fighter jet prototypes – four single-seat and two twin-seat models – by the first half of next year. Test flights for the prototypes begin next year, while development is due to be completed in 2026.

The KF-X project, aimed at building the first domestically developed fighter jet, has been called the most expensive military project in Korean history, with a price tag of approximately 8.5 trillion won ($7.8 million) for development alone. Approximately 1.6 trillion won, or 20 percent, is to be paid by Indonesia, which will eventually receive 50 out of a total 170 jets.

The project’s development has been hit by speculation of Jakarta’s impatience with the protracted timetable.

Indonesia faces rapidly mounting security concerns over China’s expansion into the South China Sea. China passed legislation last month authorizing its Coast Guard to use weapons against foreign ships that are considered to be intruding into its waters, a move that could be aimed at enforcing its maritime claims inside Indonesia’s economic exclusion zone (EEZ) north of the Natuna islands.

Indonesia’s air force chief announced Feb. 17 that Jakarta will buy 36 Dassault Rafale from France and eight F-15EX jets from U.S. arms maker Boeing. The announcement prompted DAPA to issue a statement on Feb. 21 that the purchases were unrelated to Indonesia’s commitment to the KF-X development project.

DAPA records submitted to the National Assembly showed Indonesia has only paid 227.2 billion won out of the 831.6 billion won it promised for this year.

Meanwhile, production costs for 120 jets that Korea will receive are estimated at 10 trillion won ($8.9 billion).

When the development is complete, 40 units will be delivered to the Air Force by 2028 and another 80 units by 2032, according to officials.