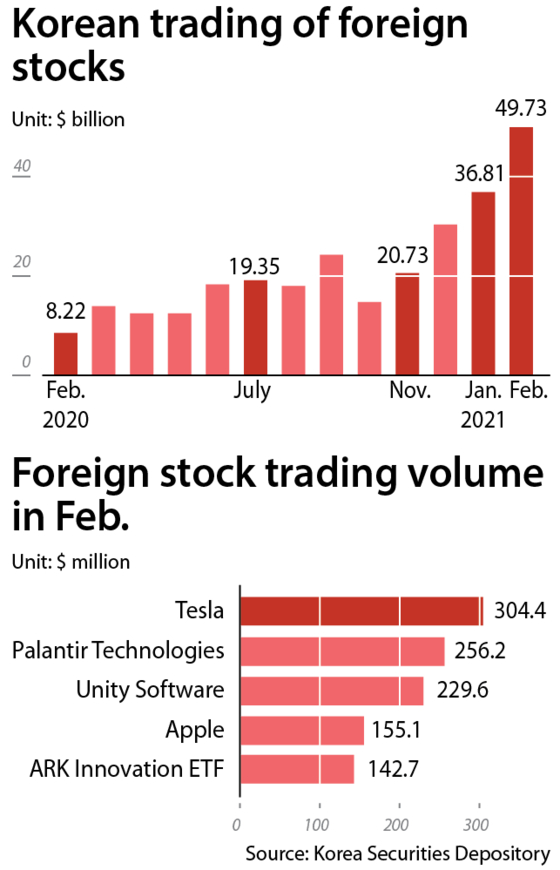 He regretted not buying Tesla shares in the past. The price of the stock hit $900 in January but moved down to around $800 last month. The man finally bought some shares on Feb. 23 after checking the price every night for over a month.

“Since the Kospi continues to fluctuate recently, I started investing in foreign stocks,” he said.

Korean investors are now putting their money in foreign stocks as the main index has been bearish recently.

According to data from Korea Securities Depository, Korean retail investors and institutions traded roughly 60 trillion won ($49.73 billion) of foreign stocks in February, up 35 percent compared to the previous month. When comparing to same month last year, volume increased over sixfold.

Tesla was the most popular foreign stock for Koreans. The investors net bought $304.43 million worth of the shares just last month.

Major IT shares were favorites in the past, but the investors are now looking forward to discovering new companies.

The second most popular foreign stock in February was Denver’s Palantir Technologies, of which Koreans purchased a net $256.18 million, followed by Unity Software, of which Koreans bought a net $229.61 million.

Koreans have been getting out of Twitter-mob stocks.

Koreans also sold off some $154.85 million worth of shares of EHang Holdings, one of the largest Chinese drone makers, after Wolfpack Research released a report questioning the business on Feb. 16.

The report described EHang Holdings as “an elaborate stock promotion, built on largely fabricated revenues based on sham sales contracts with a customer who appears to us to be more interested in helping inflate the value of its investment.”

Shares of the Nasdaq-listed company plunged nearly 63 percent after the report’s release.

Experts say it is time for Korean investors who wish to invest in foreign stocks to come up with a new road map. As Covid-19 vaccinations could give a boost to the economic recovery, the stock market could experience lots of price volatility in the near future.

“As the economic stimulus packages from all over the world would possibly increase the expectation toward economic recovery, major leaders in the stock market, which are currently defensive stocks such as IT- and healthcare-related shares, can be changed to cyclical stocks such as financial companies,” said Yoo Seung-min, a senior analyst at Samsung Securities.

Some say Koreans must be more cautious in purchasing foreign stocks as the United States has no daily trading limit.

“Koreans must be careful to not be gripped with fear-of-missing-out epidemic and go all-in in particular stocks like GameStop,” said Lee Min-hwan, professor of global finance and banking at Inha University.