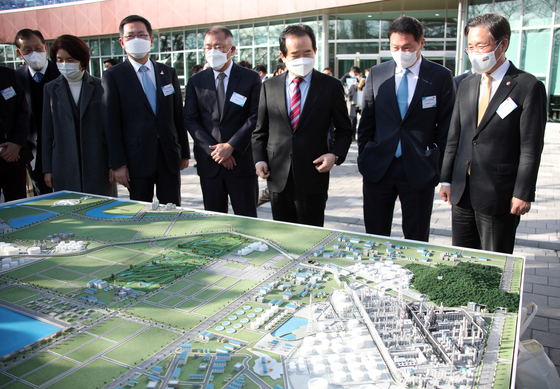 Prime Minister Chung Sye-kyun, third from right, looks at a model of a hydrogen plant at the factory of SK Incheon Petrochem on Tuesday, with SK Chairman Chey Tae-won, second from right, and Hyundai Motor Chairman Euisun Chung, fourth from right.


SK Holdings will pour a total of 18.5 trillion won ($16.5 billion) into producing hydrogen fuel by 2025, a major milestone in the group's clean energy drive.

The investment, announced on Tuesday, will consist of two main parts: development of a liquid hydrogen power plant in Incheon and a factory near Boryeong, South Chungcheong.

In the first phase, 500 billion won will go to establishing a hydrogen-based fuel cell power plant by 2023 in Incheon, with an annual capacity of 30,000 tons of liquid hydrogen. Most of the energy will be used to power Hyundai Motor’s Nexo SUV.

Located near an SK Incheon Petrochem plant, the new facility will use hydrogen recycled from the petrochemicals manufactured at the nearby plant, and SK E&S will take the lead in the project.

In the second phase, 5.3 trillion won will be spent on setting up a more environment-friendly manufacturing site to extract hydrogen by 2025 in Boryeong.

With an annual capacity of 250,000 tons, the facility is designed to supply so-called blue and green hydrogen that generate little or no carbon emissions, foregoing the conventional way of extracting the energy source from fossil fuels.

Blue hydrogen is derived from natural gas, but greenhouse gases are captured during the process, which mitigates the environmental impact. Green hydrogen is created using renewable energy, a technique that emits zero carbon.

The group is looking beyond home turf and planning to export the hydrogen to Vietnam and China.

“Hydrogen production is not affected by temperature and requires relatively small plots of land, which makes it an ideal clean energy for Korea,” said SK Chairman Chey Tae-won in a statement.

The rest of the investment will be used to build related infrastructure including hydrogen stations.

The announcement was the latest in a series of hydrogen-related ambitions announced by SK in step with the government’s push to make Korea carbon neutral by 2050 and build an infrastructure for low-carbon energy.

SK is not alone in betting big on the element. The government pledged 824.4 billion won to support a hydrogen ecosystem and research and development for it throughout this year.

Five major conglomerates- SK, Hyundai Motor, Posco, Hyosung and Hanwha – and other small-and-medium enterprises have committed a combined investment of 43.4 trillion won in the hydrogen business by 2030, according to the government, which includes the SK investment announced on Tuesday.