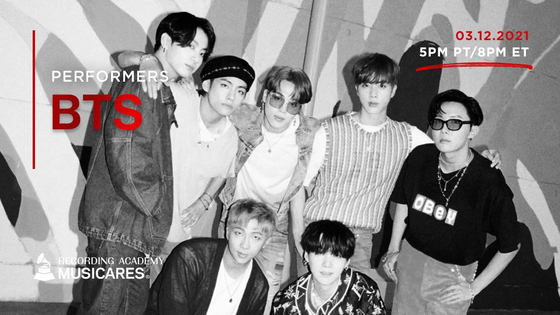 Boy band BTS will appear in the online fundraiser concert ″Music On A Mission″ hosted by charity MusiCares. [MusiCares]


BTS will perform for “Music On A Mission,” an online fundraiser concert for musicians affected by the Covid-19 pandemic, according to charity MusiCares on Tuesday.

“Music On A Mission” is part of this year’s Grammy Week and will take place on March 12, two days prior to the 63rd Grammy Awards. The concert aims to help musicians and music industry workers who were affected by the Covid-19 pandemic.

Artists Haim, H.E.R., Jhene Aiko, and John Legend have also been announced as part of the lineup.

This is not BTS’s first time working with MusiCares. The band previously donated outfits worn in its music video for “Dynamite” (2020) to MusiCares’s Charity Relief Auction in January, which sold for $162,500.

BTS will also compete in the Best Pop Duo/Group Performance category for “Dynamite,” its hit song which topped the Billboard Hot 100 chart last year. It is the first K-pop act in history to be nominated for a Grammy.