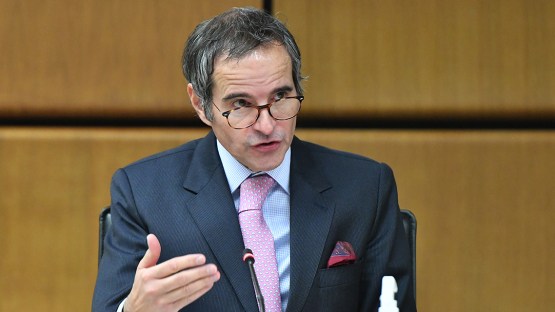 Rafael Mariano Grossi, director-general of the International Atomic Energy Agency, delivers an opening statement to the IAEA Board of Governors in Vienna Monday. [IAEA]

“The DPRK’s nuclear activities remain a cause for serious concern,” said IAEA Director-General Rafael Mariano Grossi in a report to the Board of Governors in Vienna, calling it “deeply regrettable” and “a clear violation” of United Nations Security Council resolutions. DPRK stands for the North's official name, the Democratic People's Republic of Korea.

Grossi said that since his last report to the board in September, “some nuclear facilities in the DPRK continued to operate while others remained shut down.”

He said that there are “ongoing indications of activity at the Kangson location,” referring to an unreported facility in Chollima District of Nampo City in Kangson, seen by the intelligence community as a covert uranium enrichment plant.

Grossi added that that there are also “recent indications of operation of the steam plant that serves the radiochemical laboratory” in Yongbyon, referring to a reprocessing facility that extracts plutonium from spent fuel rods.

He also said that currently “there are no indications of the production of enriched uranium at the reported centrifuge enrichment facility at Yongbyon,” nor any signs of operation of the key 5 megawatt-electric reactor at the nuclear complex in North Pyongan Province.

Grossi called on North Korea to “comply fully with its obligations under Security Council resolutions,” and to cooperate promptly with the IAEA “to resolve all outstanding issues, especially those that have arisen during the absence of agency inspectors from the country.”

He added that the IAEA “is intensifying its readiness to play its essential role in verifying” the North Korean nuclear program.

The UN atomic watchdog has not had access to North Korea since IAEA inspectors were expelled from the country in April 2009. The IAEA has since relied on monitoring the North’s nuclear program from afar through satellite imagery and other open-source data.

A recent report by 38 North, a U.S. Pyongyang monitoring website, said there is new evidence suggesting that Kangson may not be a uranium enrichment plant but could be a facility manufacturing components for centrifuges.

North Korea conducted six nuclear tests between 2006 and 2017. Pyongyang has halted nuclear tests and longer-range missile launches since 2018 in the spirit of diplomacy, though denuclearization talks have been at an impasse since 2019 and leader Kim Jong-un has vowed to advance his country’s nuclear capabilities.

New U.S. Ambassador to the United Nations Linda Thomas-Greenfield said in a press conference in New York Monday that North Korea “constitutes a serious threat to our peace and security and to the globe.”

When asked about North Korea’s continued development of its nuclear program and what role the United States will play in the UN Security Council to jump-start denuclearization negotiations, Thomas-Greenfield replied, “We have a vital interest in trying to deter North Korea toward that goal, and also in defending against its provocations or use of force.”

She also noted that U.S. President Joe Biden “has made clear that we’re going to engage in a principled diplomacy, together with our allies and partners, and we will keep pressing toward a denuclearized North Korea.”

Thomas-Greenfield likewise said that the U.S. administration is still undergoing a North Korea policy review and prioritizes keeping the American people and its allies safe.

The White House said in a statement that Suh and Sullivan reaffirmed the strength of the South Korea-U.S. alliance and their “shared commitment to coordinate closely on the Democratic People’s Republic of Korea, and the importance of maintaining peace and stability on the Korean Peninsula.”