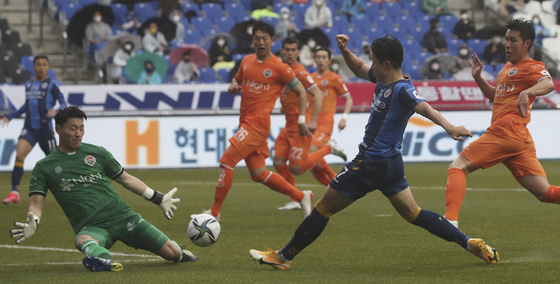 
The 2021 K League 1 season wrapped up its first week, with fans allowed back into stadiums unlike last season due to the Covid-19 pandemic.

Under the current social distancing measures, clubs in the greater Seoul area allowed fans to fill ten percent of their stadiums capacity while those outside Seoul could accept up to 30 percent. Fans had their temperatures taken before entering and were required to sit three seats apart. Cheering was substituted with clapping.

The match drew plenty of attention as it marked the debut of the two team's coaches,  Kim Sang-sik and Park Jin-sub. Fans were also curious to see whether Ki Sung-yueng, who was recently accused of sexual assault by his elementary school teammates, would play.

Jeonbuk failed to open the scoring until the middle of the second half, but took the lead when FC Seoul defender Kim Won-gun headed in an own goal in the 75th minute and ended the game with Jeonbuk winger Modou Barrow's goal in extra time.

FC Seoul captain Ki did get a start, but was substituted in the 36th minute due to muscle pain.

In a press conference called by Ki after the match, he denied the allegations in person for the first time after previously posting a statement on his Instagram.

Later in the day, Suwon FC, which returned to the K League 1 after five years, drew 1-1 with Daegu FC.

Incheon players appeared with black ribbons attached on their uniform as a tribute to goalkeeper Stefan Mugosa's father who passed away on Feb. 25. When the midfielder Elias Aguilar scored the first goal in the 27th minute, players placed Mugosa's uniform on the ground and reached out to the sky to show their condolences.

In the second half, Pohang's Shin Kwang-hoon scored the equalizer in the 14th minute and Song Min-kyu broke the tie in the 26th.

Suwon Samsung Bluewings beat Gwangju FC 1-0 at home thanks to a goal from Kim Gun-hee. It marked Suwon's first victory in a K League opening game in seven years since the 2014 season.

Yoon Bit-garam's goal from a free kick in the 27th minute and two goals from Kim In-sung helped Ulsan set a K League record for the most goals scored and the largest margin of victory on the first match of a season.

After Hong took the helm of Ulsan, the team lost both of its matches at the FIFA Club World Cup in Qatar last month, but is off to a good start with the record breaking win.

On the same day, Seongnam FC and Jeju United FC tied 0-0 at Tancheon Sports Complex. Seongnam failed to make the most of Jeju being a man down after Jin Seong-uk was sent off for using his elbow in the 26th minute of the second half.

Meanwhile, the start of the season also marked the introduction of new substitution rules.

K League 1 clubs will now be allowed to make up to five substitutions if they start with at least one U-22 player and two or more U-22 players are included in the total entry of 18 players.

During the opening match between Jeonbuk and FC Seoul, Jeonbuk head coach Kim Sang-sik took advantage of the new rules by replacing starting goalkeeper Song Bum-keun with 19-year-old goalkeeper Kim Jeong-hoon, in order to use his maximum five substitutions.

While the new rules are likely to allow younger players to make their K League debut, there are concerns that it will make it difficult to see teams in normal operation if U-22 players are substituted for a short time in order to make use of all substitutions.