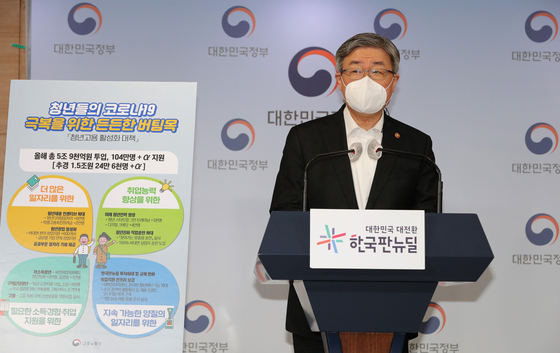 If all goes to plan, some 1 million jobs will be created for young people with taxpayer money.

The jobs are supposed to be heavily in the IT area, and some pending is on vocational training in digital technologies.

According to the Ministry of Employment and Labor Wednesday, the job program relies heavily on cooperation from the private sector.

The government will pay up to 1.8 million won in monthly salaries for young people newly hired by small and medium-sized IT companies for up to six months.

This is supposed to expand the number of new jobs for young people through its digital job program from a previous target of 50,000 to 110,000.

The digital job program was introduced last July to create jobs for people in their 20s and 30s who have been struggling to find work due to the pandemic.

This year, the government decided to expand the program.

In January, job losses were the largest in two decades with nearly 1 million people freshly unemployed.

While all age groups saw declines in jobs in January, the largest number was for people in their 20s and 30s.

Additionally, the government has decided to extend a program that requires public institutions to maintain the employment of young people aged 34 or younger at 3 percent of its total number of employees until 2023. The program was to end at the end of this year.


Digital training is being offered to 3,000 young people and 40,000 people with no background in IT will be trained under a government-run  K-digital credit program.

“[The government] will regularly monitor the execution of these job programs through its job crisis management team and listen to the opinions of young people,” said Employment and Labor Minister Lee Jae-kap.