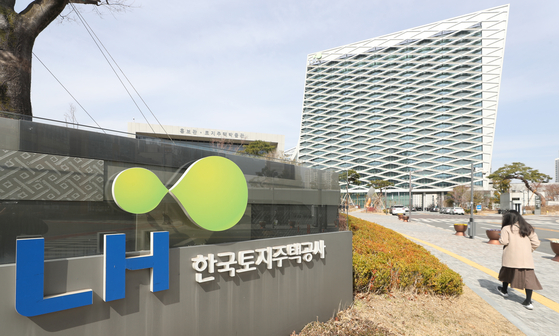 
Land and Housing Corp. (LH) employees have been suspended from their duties after being accused by two civic groups of buying land near a New Town redevelopment site using confidential information.

Investigations are ongoing to determine whether others used advanced notice of redevelopment projects to buy up cheap land.

On Wednesday, LH dismissed the 12 employees from their duties, though they remain employed. While 14 have been accused, two are currently retired.

Last month, the Land Ministry announced that the site would be developed into the latest New Town, with 70,000 housing units to be built.

Family members, including spouses, were used as intermediaries to buy the land, the civic groups claim.

The purchases were made between April 2018 and June this year, which partly overlaps with the time when Land Minister Byun Chang-heum headed LH. Byun served as the head of the state-owned developer between April 2019 and December last year.

The civic group argued that the properties weren't purchased simply as investments but as part of coordinated efforts to take advantage of access to internal information.

Massive loans were taken out to buy the land, the civic groups claim, which the groups say is a sign that the employees were confident that the land would be purchased by the government and used for redevelopment.

Roughly 5.8 billion won, about half of the total, was borrowed from financial institutions.

The employees could face a maximum 5 years in prison or a fine of up to 50 million won if they are found to have used information obtained through work for other purposes or leaked that information to a third party.

Land Minister Byun has not yet made specific comments on the issue.

The controversy has spilled over to the political arena, with the main opposition People Power Party demanding that the government and the ruling Democratic Party get to the truth.

President Moon Jae-in on Wednesday ordered a thorough investigation of related government and public company employees and of their families.

“Not only should Gwangmyeong-Siheung be investigated but all of the third New Town projects,” President Moon said, according to the Blue House spokesperson Kang Min-seok. “A full investigation of any land transactions made by employees and their families of related departments at the Land Ministry, LH and other related public institutions should be conducted.”

The president ordered the prime minister office to head the investigation.

“And if any violation has been confirmed, strong action should be taken,” Moon said.

He also ordered the government to come up with measures that would prevent speculative investments related to new development projects.

Gwangmyeong-Siheung is the sixth area in which a New Town project has been announced by the Moon administration since 2018.

The purpose of the New Town projects is to supply housing units near Seoul to cool off the overheated real estate market in the city.