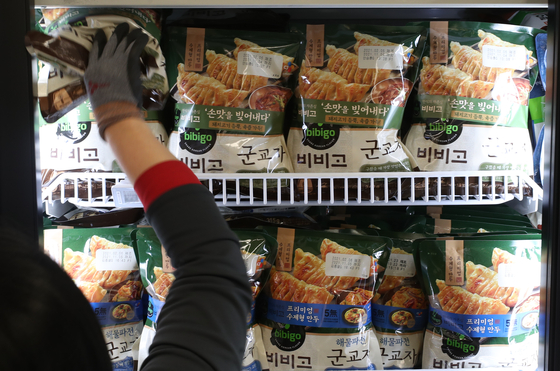 Frozen dumplings marketed at a discount store in Seoul on Wednesday. [YONHAP]

Exports of Korean dumplings shot up 46 percent on year to $50.89 million, a record, according to data provided by the Korea International Trade Association.

Exports to the United States jumped 50 percent on year to $11.74 million.

People are even starting to adopt the use of the Korean word for dumpling, mandu, a measure of the popularity of the exports.

Korea’s market share for frozen dumplings in the United States last year rose to 2.7 percent from 1.9 percent the previous year. It is now the fourth largest exporter after Italy, Thailand and Canada. China came in sixth.

Korean dumplings are also popular in Japan, the Philippines, Vietnam and Singapore.

“These days, chefs from the United States, YouTubers and influencers just say ‘mandu’ instead of Korean dumplings,” said a spokesperson for CJ CheilJedang, which sells Bibigo brand dumplings.

Mandu is one of the best-selling categories for the Bibigo brand. Many countries have their own dumplings, like ravioli in Italy and empanada in Latin America, according to Lee Hye-jin, a spokesperson for CJ CheilJedang.

The company sold a trillion won worth of Bibigo dumplings last year.

“Korean mandu are enjoying popularity globally because they can be steamed, fried and used in soups thanks to their thin wrappings,” said Sim Hye-jeong, a researcher at the Institute for International Trade. “They contain fewer carbohydrates than competing [dumplings] and contain lots of vegetables and protein, and therefore, are seen as a healthy food. A continued [rise in] exports to the United States is expected, as mandu are becoming a part of a proper meal instead of a snack in the country.”