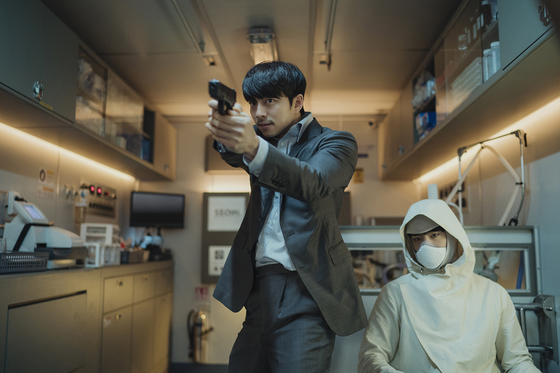 Gi-heon, played by Gong Yoo, is an ex-agent of the intelligence bureau on his last mission to transport Seobok, played by Park Bo-gum, the world's first-ever human clone, to safety. [CJ ENM]


A release date has been set for "Seobok," a long-delayed sci-fi flick.

The film will hit theaters and also be available via the Tving streaming platform on April 15, CJ ENM said Wednesday.

"In a situation where the needs and perspectives of consumers for content is rapidly changing amid the coronavirus pandemic, we decided to release 'Seobok' through diverse platforms to meet their needs," the distributor said in a statement. "We believe it's a way to provide more options for the audience while coexisting with local theaters, which are struggling with the absence of new releases."

Director Lee Yong-joo's "Seobok" was one of the most anticipated films of 2020, generating buzz for the involvement of heartthrobs Gong Yoo and Park Bo-gum. But the release date was pushed back several times due to a spike in the number of coronavirus cases.

The title of the film, "Seobok," is also the name of an envoy sent by Qin Shi Huang (B.C. 259- B.C. 210), the founder of the Qin Dynasty, to search for a herb that would grant him eternal youth.

During a press conference held last October, director Lee said that he wished to express a "desire that transcends across eras and goes back more than 2,500 years ago. In this age where longevity is [no longer a novelty], or when people go to hospital when they're sick, people are [more] concerned about their well-being and fear death. So the movie title naturally came to be 'Seobok.'"

Tving, which used to be CJ ENM's OTT platform, became an independent corporation last October. The streaming platform said it will invest 400 billion won ($356 million) over the next three years to secure "well-made original content."