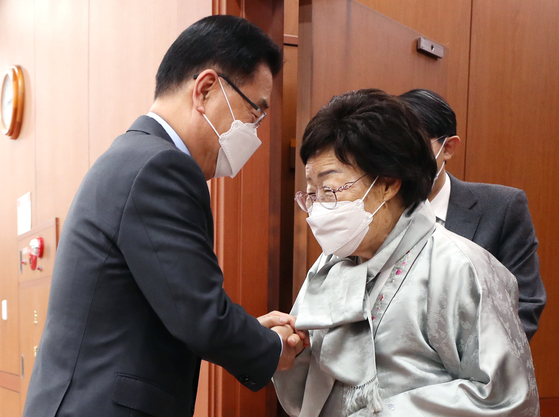 Lee Yong-soo, a former “comfort woman” victim, met Foreign Minister Chung Eui-yong on Wednesday and asked the Korean government to raise the sexual slavery issue at the International Court of Justice (ICJ) to hold Japan accountable for its wartime atrocities.

Chung said that he would “seriously review the matter as it is not a simple issue." It was Chung's first meeting with a wartime sexual slavery victim since he became Korea’s top diplomat last month.

In a press conference last month, Lee, 92, urged the government to bring the wartime sexual slavery case to the ICJ to “hold Japan accountable under international law” and resolve the issue permanently to “live in peace with each other.”

She again raised the matter in her hour-long meeting with Chung Wednesday afternoon at the Ministry of Foreign Affairs in central Seoul. The two discussed justice for former comfort women, a euphemism used to refer to tens of thousands of girls and young women forced into sexual slavery by the Japanese military before and during World War II.

Chung said he had wanted to visit her in her hometown of Daegu, but Lee had insisted on visiting Seoul herself. Chung said he will continue to reach out to victims to find a resolution to the issue, a violation of universal human rights in wartime, said his ministry in a statement.

After the meeting, Lee, a longtime women's rights activist, said in a press conference at the Foreign Ministry that she had conveyed to Chung her wishes to meet with President Moon Jae-in in order to hold Japan accountable.

“I plan to ask President Moon to convince Japanese Prime Minister Yoshihide Suga to receive a ruling on the comfort women issue at the ICJ,” Lee told reporters. “Time will not wait for me. I came today with a desperate heart to make an earnest appeal to the minister.”

Lee said, “When we die, Japan will continue to act the way it has without lawfulness, through lies.”

But even if the case is brought to the ICJ, the Hague-based court needs the consent of both parties to settle an international dispute.

Analysts say the two governments should consult each other before taking the case to the ICJ. Lee on Wednesday submitted to the ministry a draft agreement drafted by a committee calling for the Korean and Japanese governments to settle the issue at the ICJ, but it is unclear whether Japan will accept all the terms requested by Lee.

She continued, “Korea and Japan are neighbors. Hate the crime, not the person.”

Lee also called out a controversial Harvard professor who recently came under fire for comparing wartime sexual slavery victims to “prostitutes” in a scholarly paper.

The wartime sexual slavery issue has gained renewed global attention after John Mark Ramseyer, a Mitsubishi professor of Japanese Legal Studies at Harvard Law School, claimed in his paper “Contracting for Sex in the Pacific War” that the victims were not coerced into working in Japan's front-line brothels but were voluntarily employed as contracted sex workers. Thousands of people, including global scholars, Nobel laureates, rights activists and Harvard students have called for the retraction of the paper.

Lee, who has publicly testified for years of her being forced into sexual slavery during World War II as a teenager, spoke out against the paper and in a virtual seminar with Harvard students last month, calling the controversy a “a wakeup call.”

However, raising the issue with the ICJ is a complicated matter that would need to take into consideration possible repercussions in diplomatic relations and a spillover to other disputes, including over the Dokdo islets.

Japan maintains that all compensation issues related to colonial rule were resolved through a 1965 Korea-Japan claims settlement agreement.

The Seoul Central District Court ruled on Jan. 8 that the Japanese government must pay 100 million won ($89,300) to each of 12 women who were forced into sexual slavery by the Imperial Japanese Army during World War II. In the ruling, the Seoul district court rejected Tokyo’s claims of state immunity, saying Japan had committed systemic crimes against humanity in violation of international standards and norms. Japan immediately protested the ruling.

In an address Monday, President Moon Jae-in stressed his commitment to efforts for Korea-Japan cooperation and a "forward-looking development" of bilateral relations, while pledging that the Korean government will “do everything possible to restore the honor and dignity of victims.”

Moon said that the two countries should be “able to wisely resolve issues of the past,” saying that Korea is always ready to talk with the Japanese government, noting that the Tokyo Olympics scheduled for this summer may provide an opportunity to enhance regional dialogue.

However, Tokyo has given a chilly response to Seoul's olive branch, and the Japanese government said in response to Moon’s address that Korea needs to take “specific steps" to resolve bilateral issues.

Second Vice Foreign Minister Choi Jong-moon in a virtual keynote address on Feb. 24 to the Geneva-based UN Human Rights Council said, “The tragedy of the 'comfort women' must be addressed as a universal human rights issue, and the recurrence of such grave violations of human rights in conflict must be prevented.”

He said that the “grim reality is that sexual violence continues to be used as a war tactic and a means of torture and terror,” adding that “current and future generations should learn valuable lessons from the painful experience of the so-called ‘comfort women’ victims from World War II.”

Seoul and Tokyo under a previous administration attempted to resolve the wartime slavery issue in a “final and irreversible” deal signed on Dec. 26, 2015, which included an apology by the Japanese government and a 1-billion-yen ($9.3 billion) fund for the victims.

Some civic organizations and survivors felt blindsided by the deal and demanded the Japanese government take clearer legal responsibility. The Moon Jae-in administration said it would not scrap the 2015 bilateral deal, despite it being “flawed,” but has also underscored that the agreement is not a true resolution of the issue.

Lee Yong-soo is one of 15 surviving registered comfort women victims. 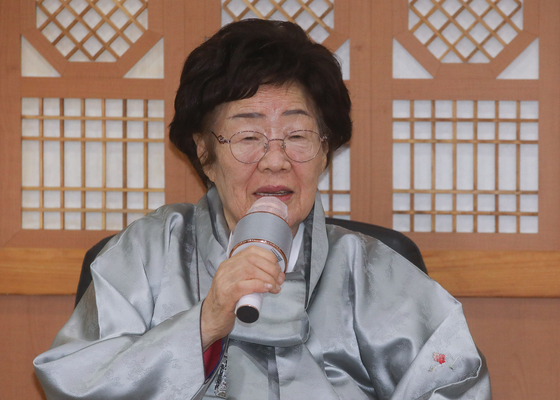 Lee Yong-soo, a survivor of the Japanese military’s wartime sexual slavery, speaks in a press conference at the Foreign Ministry in central Seoul Wednesday after her meeting with Foreign Minister Chung Eui-yong. [NEWS1]