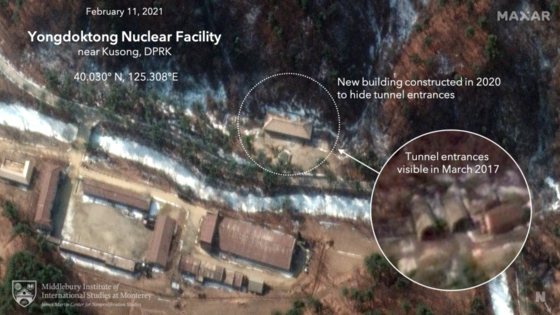 A satellite image taken on Feb. 11 by Maxar shows a new structure obscuring the entrance to a pair of tunnels at Yongdoktong in Kusong, North Pyongan Province, where nuclear weapons or nuclear weapon components are believed to be stored. [MIDDLEBURY INSTITUTE OF INTERNATIONAL STUDIES]


North Korea appears to have taken steps to conceal a facility the U.S. believes is used to store nuclear weapons at its Yongdoktong site in North Pyongan Province, CNN reported Tuesday.

A satellite image from Feb. 11 analyzed by experts at the Middlebury Institute of International Studies shows North Korea built new structures at its Yongdoktong site near Kusong within the last year, which experts say are likely meant to conceal two underground tunnel entrances that lead to a facility where nuclear weapons are believed to be stored.

A satellite image captured on Dec. 5, 2019, by U.S. space technology company Maxar Technologies shows a pair of tunnel entrances. This compares to the image taken last month of a structure covering the tunnels that may be intended to obscure the entrances to the underground facility.

Jeffrey Lewis, a nonproliferation studies professor at the Middlebury Institute specializing in open-source intelligence, described of “a new building-like structure visible by February 2021” in the latest satellite imagery, calling the recent activity an indication that “North Korea continues to upgrade its nuclear weapons facilities and makes efforts to conceal them.”

A U.S. intelligence official told CNN that Yongdoktong has been previously identified by the U.S. intelligence community as a suspected North Korean nuclear weapons storage facility and is still believed to be used for that purpose.

Lewis wrote Tuesday in his disarmament blog, Arms Control Wonk, that the Yongdoktong site, located along a 9-kilometer (5.6-mile) stretch on a mountain valley east of Kusong, “appears to host multiple nuclear weapons related facilities, including high-explosives testing and a warhead storage site.”

Along with numerous tunnels and underground facilities, there are also office buildings, industrial buildings and housing at this location.

Lewis describes that the Yongdoktong site is well-known to U.S. and allied intelligence communities and that the existence of the site was first disclosed in the late 1990s, after U.S. officials briefed their South Korean and Japanese counterparts about the shift of high-explosives testing from the Yongbyon nuclear complex in North Pyongan to Yongdoktong.

He said that the purpose of the new structure at Yongdoktong could be North Korea’s “attempt to obscure movement of nuclear warheads and nuclear weapons components in and out of tunnels” or to provide “additional room for loading and unloading of nuclear-weapons related cargos which cannot be seen in overhead imagery.”

Lewis added, “Overall, however, the structure serves to remind us that North Korean possesses and continuously maintains a significant infrastructure for the production of nuclear weapons.”

The Joe Biden administration is in the midst of a comprehensive review of its North Korea policy, in close communication with its allies, which is expected to be announced in the coming weeks.

Denuclearization negotiations have been at an impasse after the second summit between former U.S. President Donald Trump and North Korean leader Kim Jong-un in Vietnam in February 2019 collapsed due to disagreement on the scope of denuclearization needed for partial sanctions relief.

The International Atomic Energy Agency and intelligence experts have pointed to indications that North Korea has continued to develop its nuclear program.

The new U.S. administration’s North Korea approach is expected to be more nuanced than the Barack Obama government’s “strategic patience" policy, as U.S. President Joe Biden has said he will pursue “principled diplomacy” to denuclearize Pyongyang alongside allies.

U.S. Secretary of State Antony Blinken said in his confirmation hearing he and his team will consider how to increase pressure on North Korea to bring them back to the negotiating table, along with other diplomatic initiatives.

South Korea’s Unification Minister Lee In-young told the Financial Times in an interview last week, “Maybe it is time to see whether sanctions have positively contributed to the successful denuclearization process of North Korea or not,” as he warned of a worsening humanitarian crisis and food shortage in the country amid the Covid-19 pandemic.

While some experts call for harsher sanctions as leverage for negotiations, others say that the Biden administration should send a direct signal to North Korea early on to demonstrate willingness to engage amid difficulties faced by the country due to the pandemic.

"It is a moment of opportunity," retired Gen. Vincent Brooks, a former commander of the U.S. Forces Korea, was quoted as telling CNN Tuesday. "I hope they will seek communication early on. It may begin through back channels first, but there must be a conduit of communication directly to Kim Jong-un.”