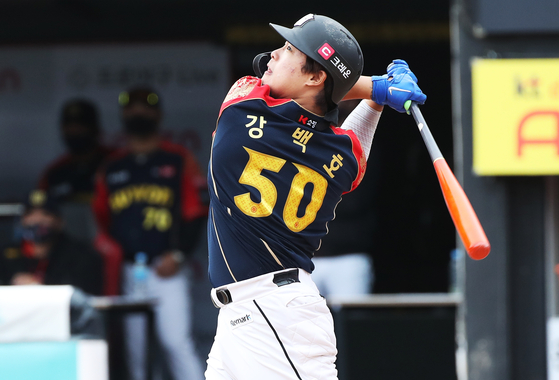 
Former Rookie of the Year Kang Baek-ho of KT Wiz is looking to bulk up and grow his upper body strength with weight training before the 2021 season begins, working off advice he got from Kim Ha-seong of the San Diego Padres.

Kang was already a fan favorite long before he reached the KBO, famously hitting the first ever home run at Gocheok Sky Dome when he was still in his first year of high school back in 2015.

By the time he turned pro in 2018, expectations were high that super rookie Kang would burst onto the scene as the next big thing in Korean baseball. Not one to disappoint his fans, Kang immediately set a new record for the most home runs hit by a high school graduate rookie, at 29.

While Kang's home runs might have slowed a bit since the KBO de-juiced its ball, his batting has been just as reliable. Kang hit double-digit homers in 2019 and 2020, recording a batting average of 0.330.

In Kang's debut year in 2018, the KT's main hitter immediately became known as a "super rookie" by setting a record of most home runs – with 29 – as a high school graduate. For the past two consecutive years, he hit a double-digit home run with a batting average over 0.330.

But despite Kang's rapid rise, not everything has gone well. In 2019, Kang's palm was torn open after he collided with the wall while trying to catch a foul hit, and last year he injured his wrist while sliding.

"It was a shame that I had to leave for three weeks due to a wrist injury in the 2020 season," Kang said.

This is why Kang is now focusing on weight training — to prevent future injuries and become a better player.

"I'm not bulking up just to hit more home runs," Kang said. "I want to see how I can change through new attempts. I wonder what kind of results I can achieve when I play full time without any injuries, so that I can set a new goal for the next season."

In fact, Kang has never really done weight training before, which is unusual for a top athlete.

Kang spent the off season with rookie major leaguer Kim, who shares the same agency and trainer. They spent a lot of time together, and it was Kim that suggested Kang's new exercise routine.

"Before I never really focused on weights," said Kang. "But Ha-seong told me a lot about the importance of weight training. I'm trying to approach it systematically by making a day-to-day program."

Kang currently weighs 98 kilograms [216 pounds], 5 kilograms more than he weighed at the end of last season. This year, he is planning to continue to work on his strength during the season.

Kang's success in the KBO hasn't gone unnoticed. Last year ESPN included him on a list of the top five KBO players to watch as potential future major leaguers, alongside Kim, Na Sung-bum of the NC Dinos, Raul Alcantara, formerly of the Doosan Bears, and Mel Rojas Jr., formerly of the Wiz.

After training with Kim, Kang's desire to enter the majors may have grown, but he is still focused on the present.

"The opportunity [to advance to the MLB] came to Ha-Seong because he worked hard," he said. "It's right to try after I'm prepared. First I will get through the current situation well and improve myself to be a help to KT."

Kang is looking ahead to the 2021 season, when KT will have to fill the gap in their offensive lineup left by 2020 MVP Rojas.

"We can fill Rojas' vacancy by working together," Kang said. "I want to change KT's image from the team that suddenly defied the odds last year to a team that consistently plays well. I hope KT can become a team that is a natural fit in the top 5 every season."