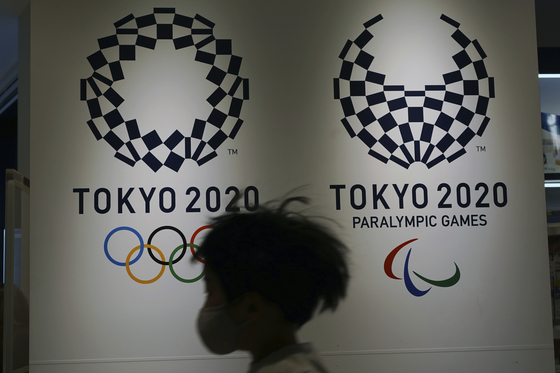 A child wearing a protective mask runs in front of the logos of the Tokyo 2020 Olympic and Paralympic Games in Tokyo. [YONHAP/AP]


Following the distribution of Covid-19 vaccines around the world, the postponed Tokyo Summer Olympics will likely commence as scheduled this year — and Korean athletes are slowly preparing.


Tokyo 2020 Organising Committee President Seiko Hashimoto will hold a five-way teleconference with International Olympic Committee (IOC) President Thomas Bach and three other officials on Wednesday to discuss measures regarding whether spectators will be allowed, and if so, how many.

Last month, the IOC and the Tokyo Organising Committee released several so-called playbooks containing Covid-19 health guidelines, reflecting their willingness to push ahead with the Games despite virus concerns.

Other international competitions such as the Australian Open were held as scheduled, and leaders of Group of 7 have expressed support in favor of holding of the Tokyo Olympics.

President Moon Jae-in also stated that Korea will work together with Japan for the success of the upcoming Olympics in his address marking the 102nd anniversary of the March 1 Independence Movement on Monday.

Korean sports officials said Wednesday that the Korean Sport & Olympic Committee is discussing with national health authorities Covid-19 vaccinations for those participating in the Olympics.

The Committee believes this would amount to about 1,000 people receiving Covid-19 vaccines, including athletes, coaches, officials and even training partners.

They expect the total number of participating athletes to be around 350, including 157 who already qualified for the Games by the end of 2020.


The selection for the national squad will be held in June, so the Committee included as many people as necessary on the inoculation list.

“The Committee is in talks with the government and health authorities to ensure that athletes will receive their first dose of vaccines in May, once the frontline medical workers' vaccinations are done,” one official said.

As the Olympics begin on July 23, the Taegeuk Warriors must receive their first round of inoculations by May and the second by June in order to prepare for the Games without any disruptions.

Getting a Covid-19 vaccination is only a recommendation and not mandatory for athletes participating in the Tokyo Olympics.

However, the Japanese government recommends athletes from each country to get vaccinated before coming to Japan to prevent the spread of the virus.

The Korean Olympic Committee will analyze the regularly updated playbooks and will offer health and safety training programs around May or June at the National Training Center in Jincheon, North Chungcheong.