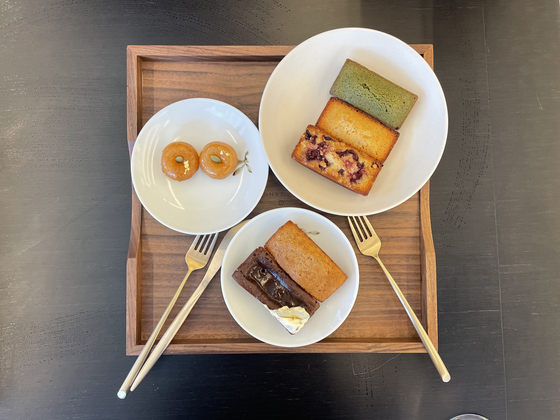 A selections of small bites available at Refreshment. The financiers look no different from the ones commonly found at French pastry shops, but feature unusual flavors. [LEE SUN-MIN]


Modern Korean isn’t a term used only for savory cuisine and new dessert shop Refreshment, which opened this week, is here to prove that point. At Refreshment, Korean flavors are incorporated into sweet treats, offering an approachable option to try traditional ingredients.

Chef Kwon Woo-joong of Kwon Sook Soo, a two-Michelin-starred restaurant in southern Seoul’s Gangnam District, decided to mix and match Korean and international desserts with the help of the team at the restaurant. Han Wook-tae, the restaurant's manager and sommelier since 2015, and Jang Hyun-jung, the pastry chef for the past three years, were among those who contributed ideas from their experience at the fine dining spot. 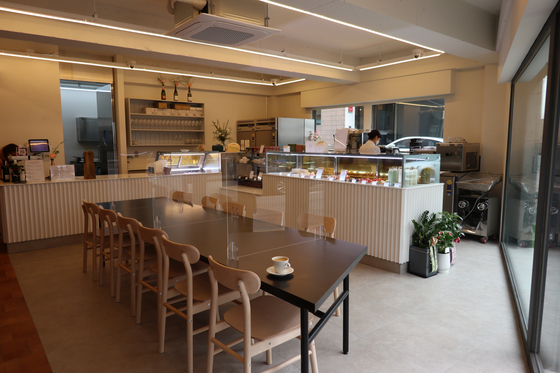 The inside of newly opened Refreshment, run by a team from modern Korean restaurant Kwon Sook Soo, which has two Michelin stars. Refreshment offers desserts that look Western but are made with Korean ingredients. [LEE SUN-MIN]


The name Refreshment was devised as an attempt to show contrast between the new spot and Kwon Sook Soo.

While almost everything served at the latter, including the dinnerware, carries some aspects of traditional Korean style, those aspects are not evident from the façade at Refreshment.

The name is also an homage to the restaurant's team and the difficulties they have endured during the Covid-19 pandemic, signaling that now is the time to start anew.


“While we were planning this dessert shop, I had no way to relieve stress other then buying a bottle of wine to drink at home or taking a bite of a dessert. These were the things that kept me going,” said chef Kwon, explaining why the half the space of the dessert shop is covered with wine bottles.

“The name came about because we are wishing people can get a refreshing dessert and feel refreshed in these difficult times.”

While the desserts on display in the showcase look no different from a selection you'd see at a patisserie, a glance at the descriptions tells a very story. 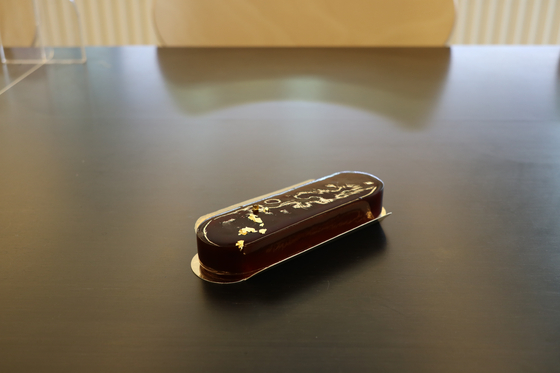 Ssanghwa tea, a popular winter time drink made with many different medicinal herbs, has been made into a jelly and combined with bitter chocolate and nuts in a layer cake. [LEE SUN-MIN]


For baked goods, the team reimagined classic French financiers, or small almond cakes, with Korean flavors like such as gangjang, or soy sauce, Korean berries called sansuyu and ginger. The popular drink called ssanghwa, which Koreans drink during the winter in order to fend off colds, has been made into jelly to cover cake layered with dark chocolate and nuts. The summer drink called saengmaeksan, which is made with ginseng, omija berries and herbs, has been recreated as a pudding with cream and jelly on ice. While heukyun, a Joseon era (1392-1910) dessert, with cinnamon, local odi berries, and sancho powder, which is spicy and peppery, take the modern form of a French style tart, the flavors and ingredients remain true to the original Joseon recipe.


In the same vain is juak, a deep-fried, round sweet cake usually served at the end of meals during the Joseon Dynasty, as well as maejakgwa, another deep-fried dessert with a crunchy texture that's made with ssuk, or mugwort.

Refreshment also offers customers purchasing gifts the option to present their treats in a mother of pearl gift box. The idea came from many diners at Kwon Sook Soo who were looking to buy traditional Korean desserts. 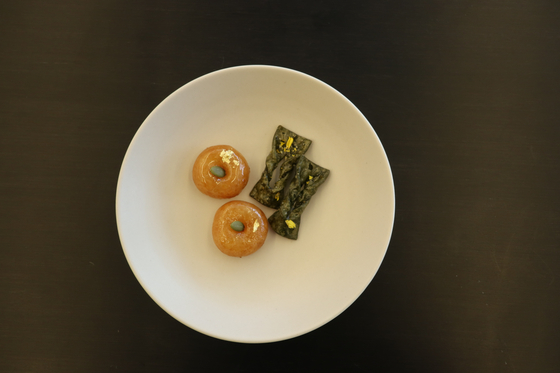 Juak, left, and maejakgwa, are some bite-sized desserts that were often enjoyed at the end of a meal during the Joseon era. [LEE SUN-MIN]


“Dessert may seem like the culture of the West, but a demand has definitely developed from many modern-day Koreans,” said Kwon. “Prevalent desserts in Korea all carry ingredients from overseas so we wanted to show that a variety of very Korean ingredients and flavors can be used to make sweet dishes and create a new scene that's abundant with modern Korean fare.”

As mentioned, Refreshment also offers a large wine selection. Customers may be confused by the organization at first, with French and Italian wines all jumbled together, but there's a reason behind this system. Different from shops that tend to display wines by regions or by grape varieties, Refreshment sorts its wines based on what food they would pair best with.

It has eight different categories: Korean, Chinese, French and Italian, sushi and sashimi, barbecue and grill, and dessert, as well as chef’s choice which was chosen by chef Kwon and sommelier’s choice from Han. There is also a honsul, or drinking alone, category to cater to those looking to enjoy a drink in the comfort of their own company.

It was Kwon's idea to sort the wines this way as he said he often finds himself at a wine shop debating which bottle to choose to pair with food at home. 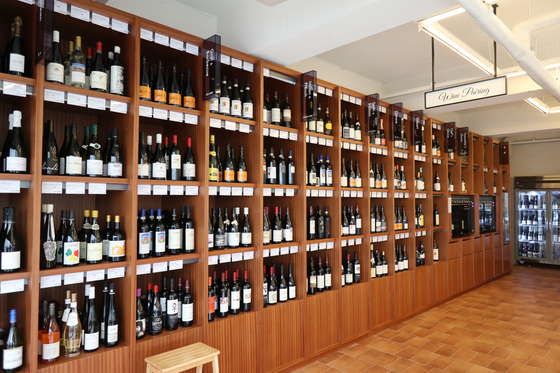 
Refreshment's selections of dessert wine is particularly extensive and includes marsala and vinsanto wines, both imported from Italy, as well as Portugal’s fortified high-alcohol port wine and another fortified wine from Madeira Island.

To pair with Refreshment's ssanghwa dessert, sommelier Han suggests port or Madeira wine with an oxidized and caramelized nuance, as the dessert has stewed fruit flavors alongside ganjang and dates.

Despite the common idea that dessert should be paired with sweet wine, sommelier Han says that's not always the case. For the gangjang financier, Han suggests having a glass of Italian red wine called Brunello di Montalcino. Because this baked good isn't particularly sweet, the balsamic-vinegar-like scent from the wine works in perfect harmony. For heukyun, Han suggests white wines from France’s Jura region or fruity red wines made with gamay, dolcetto or barbera grapes. 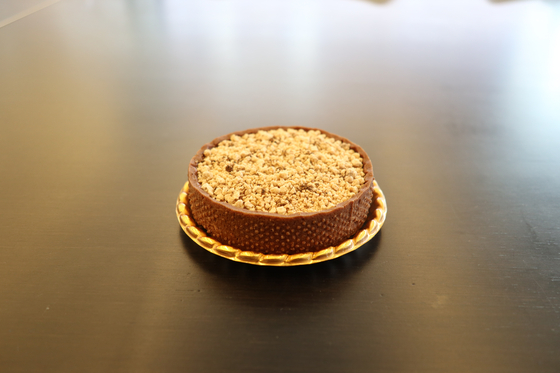 A tart inspired by heokyun is recreated with the recipe found in a Joseon-era encyclopedia, made with panfried flour, odi berries and cinnamon as well as sancho powder. [LEE SUN-MIN]


“Since the desserts at the shop don’t necessarily push sweet flavors to the forefront, they match well with not-so-sweet wine and that also offers consumers another round of fun,” said Han.

The shop also has a dispenser where customers can taste about a dozen different wines for 5,000 ($4.40) won per sample, allowing them to find the perfect match.

“Not all good wines make the best pairing with food,” said Han, who has chosen bottles for the shop, most of which range in price from 50,000 to 100,000 won. “We tried to refrain from stocking already well-known, big label wines, to introduce something customers may find charming.”

To promote its selection, Refreshment is running an event with Italy’s Sassicaia and Tignanello wines, both known to have been favorites of former Samsung head Lee Kun-hee and usually priced at $400 per bottle. The shop will open some bottles for tasting at the price of 5,000 won. The promotion runs until Saturday.

“I like wines that have deep and extensive scents,” said chef Kwon. “One Burgundy wine has a strong raspberry scent and that transported me to a raspberry field.”

“I hope people find their own wine that can virtually transport them to their happy place.”