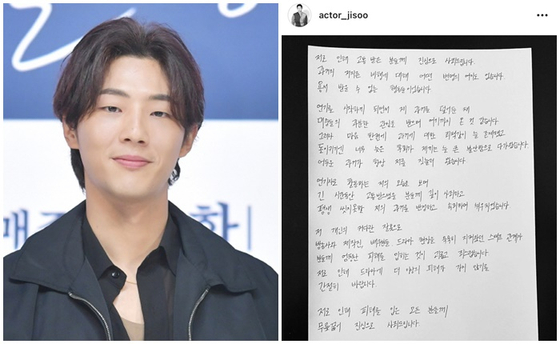 Actor Jisoo, left, and his handwritten apology that was uploaded on his Instagram account on Thursday morning. [ILGAN SPORTS]

“I’m truly sorry to those who suffered because of me,” he wrote. “There are no excuses to make up for my past misdeeds. They are unforgivable.”

The actor said he had always felt guilty about his past and that it had “always weighed down” upon him.

“I will atone, and to those who were tormented for a long time because they had to see me on the screen, I’ll spend the rest of my life feeling remorseful and repent my past,” he wrote.

He said he was pained that his personal mistakes were causing so much trouble to the KBS drama series “River Where the Moon Rises” that he stars in.

Earlier this week, a series of online posts accused the actor of bullying. His agency Keyeast announced on Wednesday that they took the allegations seriously and asked for accusation to be directly sent to it for further investigation.

Jisoo debuted in the MBC drama series “Angry Mom” in 2015. Although it was reported that filming is almost complete on “River Where the Moon Rises,” there have been a number of requests that the actor should be dropped from the series.