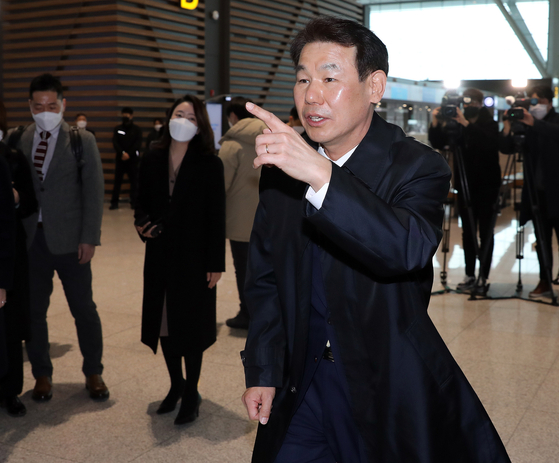 Jeong Eun-bo, Seoul’s chief negotiator for the Special Measures Agreements, speaks to reporters at the Incheon International Airport Thursday ahead of talks Friday in Washington with his U.S. counterpart Donna Welton to seal a new defense cost-sharing deal. [NEWS1]


Seoul’s chief negotiator for the defense cost-sharing agreement pledged to do his “utmost” to conclude negotiations for the bilateral Special Measures Agreement (SMA) as he departed for Washington Thursday for talks with his U.S. counterpart.

Jeong Eun-bo, Korea's negotiator for the 11th SMA, and Donna Welton, the senior adviser for the U.S. State Department’s Bureau of Political-Military Affairs Office of Security Negotiations and Agreements, are set to resume talks to renew the bilateral defense cost-sharing deal Friday in Washington for their first in-person talks since U.S. President Joe Biden took office in January.

“We look forward to concluding the deal at an early date because there is already a considerable level of consensus,” Jeong told reporters at Incheon International Airport Thursday morning ahead of the ninth round of SMA talks.

The two sides have struggled to seal a new deal after the previous agreement deciding Seoul’s financial contribution toward stationing some 28,500 American troops in Korea expired at the end of 2019. Negotiations for the 11th SMA kicked off in September 2019, but the two sides struggled to narrow their differences as Korea had balked at the Donald Trump administration’s initial demand for a nearly fivefold hike.

“I am visiting the United States for face-to-face talks to resolve some remaining issues this time around,” said Jeong. “We intend on concluding consultations on matters of principle through the upcoming talks.”

He added, “Negotiations are always difficult to predict, and, if needed, there could be additional face-to-face talks, but I will put my utmost effort," to reach a deal soon.

Jeong told reporters he doesn’t expect another furlough of Korean personnel working for the U.S. Forces Korea (USFK) in April.

A U.S. State Department spokesperson also said in a statement Wednesday that Seoul and Washington “are very close to reaching agreement on an updated Special Measures Agreement.”

The two sides have so far held eight rounds of meetings, and the last face-to-face talks amid the Covid-19 outbreak were held in March in Los Angeles between Jeong and his former counterpart, James DeHart.

A tentative agreement reached by the two negotiating teams in March last year was ultimately rejected by U.S. President Donald Trump, who continued to urge Korea to pay an exponentially higher contribution.

Some 4,000 Korean employees working for the USFK were placed on a two-month furlough last April due to Seoul and Washington's inability to agree on a new SMA. The two countries eventually struck a separate deal that June to pay wages to the Korean personnel and end the furlough, but there had been concerns that another furlough may be placed next month.

CNN reported last month that a new multi-year defense cost-sharing deal was imminent, with Seoul's contribution expected to be a 13 percent increase, as Seoul had suggested last year as its best offer, citing two sources familiar with the talks.

It also reported that the final agreement could include mandated increases in Korea's defense budget, as well as an understanding that Seoul will make certain military equipment purchases, according to one source.

Choi Young-sam, the Foreign Ministry spokesman, said in a press briefing in Seoul Thursday, “As our government has said before, we look forward to discussions to reach a mutually acceptable agreement as soon as possible.”