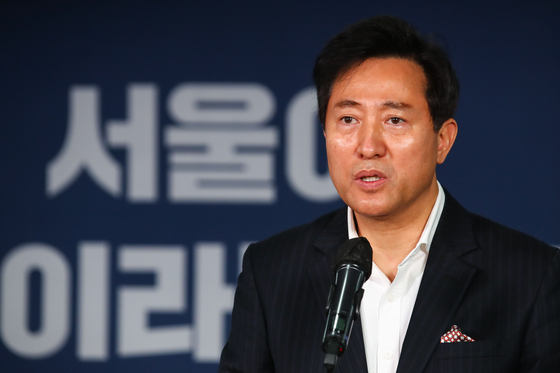 
Former Seoul Mayor Oh Se-hoon on Thursday won a primary by the main opposition party to run for his old job next month.

The People Power Party (PPP) said Thursday that Oh won its primary for the April 7 Seoul mayoral by-election. The primary was based on a two-day public opinion poll.

Oh, a lawyer who started his political career by winning a legislative election in 2000, was elected Seoul mayor in 2006 and was re-elected in 2010. He stepped down in August 2011 after losing a referendum on a plan to offer free school lunches to only 30 percent of Seoul's students, not all. Park Won-soon won a mayoral by-election in October 2011. He was reelected in 2014 and 2018, but committed suicide last July after his former secretary made a complaint against him for sexual molestation.

“I was feeling guilty for the past 10 years for having failed to complete my term as Seoul mayor,” Oh said in an acceptance speech, promising to win back the post that he resigned from.

Oh said he would do his best to help the opposition get behind a single candidate to run against the ruling Democratic Party (DP)’s candidate Park Young-sun.

Oh and Ahn Cheol-soo, chairman of the People’s Party, will compete against each other in another primary to choose a single candidate for the opposition and avoid a split in conservative votes.

“I will make sure we will consolidate candidacies,” Oh said. “If we remain split during the election, we are destined to lose.”
Following Oh’s primary victory, Ahn said he wants to meet with Oh as soon as possible to have a constructive discussion.

“Becoming the candidate [of the opposition] is not my goal. An opposition victory is,” Ahn said. “It must be an election that an opposition candidate wins.”

The winner of the Ahn-Oh race will face the DP’s Park, who recently stepped down as minister of SMEs and startups for the Moon Jae-in administration. She won a ruling party primary on Monday.

Meanwhile, the PPP said Park Heong-joon, a former aide to former President Lee Myung-bak, was named its candidate for the Busan mayoral by-election. That race is also set for April 7. 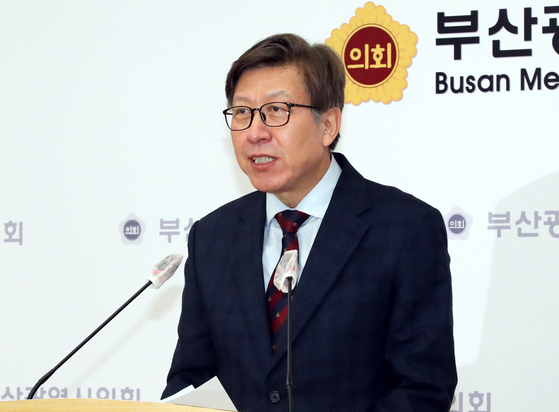 Park Heong-joon speaks at a press conference on Thursday after winning the People Power Party's primary to become its candidate of Busan mayoral by-election in April. [SONG BONG-GEUN]

In the primary, Park won a landslide 53.4 percent. Park, a professor at the Graduate School for International Studies at Dong-A University in Busan, served as senior political affairs secretary in the Lee Blue House from 2009 to 2010. He also served as special advisor to Lee on social affairs in 2011.

From 2014 to 2016, Park served as secretary-general of the National Assembly secretariat.

The DP is scheduled to announce its primary winner for the Busan mayoral race on Saturday.