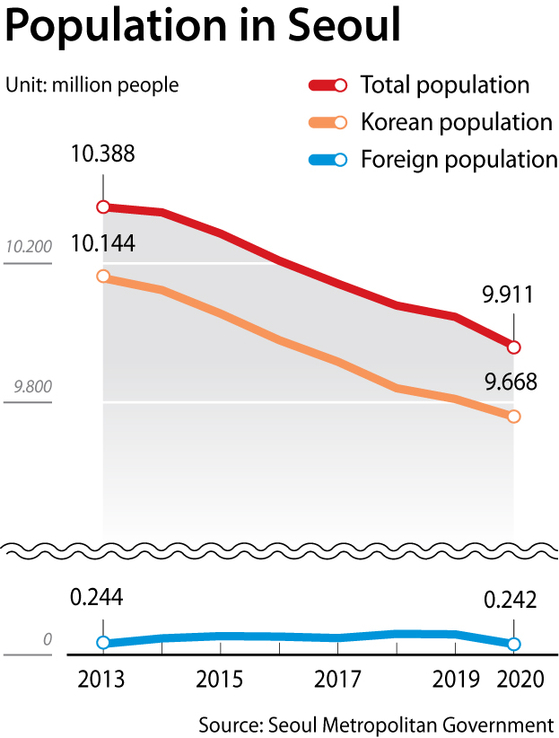 Seoul’s population dropped below 10 million for the first time in 32 years, according to the city government.

The population in Seoul at the end of last year, including both Koreans and foreigners, was at 9,911,088, the city government said in a statement Wednesday.

“It was the first time for the city’s population to drop below 10 million ever since it surpassed the mark due to industrialization and urbanization of the country in 1988,” the statement said.

The city government said there were several demographic factors at play, such as Korea's aging population and birthrate — one of the lowest in the world. Another part of the reason was the exodus of foreigners from the city with the onset of the Covid-19 pandemic.

Citing the onset of the Covid-19 pandemic as one of the reasons for the drop in the foreigner population, the city government said that it saw the largest drop among Chinese nationals. From December 2019 to December 2020, a total of 32,070 Chinese residents of Seoul left the city.

Ranking the foreign residents by their nationalities, the city government said there were 149,620 Chinese, 19,255 Vietnamese and 9,343 Americans registered to be living in Seoul as of December 2020.

Part of the reason for Korean nationals leaving the city may have to do with the rising housing prices in the city.

“We wished to be closer to my work in the city, but we just couldn’t afford it,” a 38-year-old office worker surnamed Choi told the JoongAng Ilbo.

Choi and his wife and their 3-year-old son moved from Mapo District, western Seoul, to Goyang, Gyeonggi, last year.

A 46-year-old office worker surnamed Park found himself in a similar situation.

Father of a 15-year-old and 9-year-old, Park was hoping to live near the areas in Seoul well-known for their hagwon, or private cram schools, but said the apartment prices were beyond their budget.

“We ended up moving to a neighborhood in Pyeongchon, Gyeonggi, that is also well-known for their quality hagwon and has more affordable housing options,” Park said.

“The rise in housing prices in Seoul is not the sole factor driving people out of Seoul, but it is contributing to the phenomenon," said Park Won-gap, senior analyst on real estate at KB Kookmin Bank. "We will likely see the trend continue unless the housing market cools down."