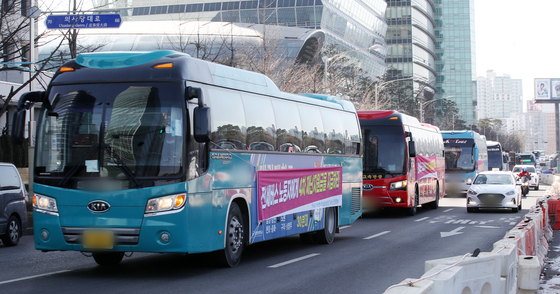 Chartered bus drivers from nationwide head toward Yeouido in western Seoul on Feb. 18 to call on the government to include them in its Covid-19 stimulus package. [NEWS1]

The government and ruling party unveiled Tuesday a massive 19.5 trillion won stimulus package to respond to Covid-19, which has given rise to a so-called “Fear of Missing Out” syndrome, or FOMO, among people ineligible for grants.

The stimulus package has three main parts: support for small businesses hurt by the pandemic, to prop up or create jobs, and spending on quarantine measures including vaccine purchases and compensating medical institutions whose businesses were affected by Covid-19. Most of the package will be paid through a 15 trillion won supplementary budget.

The grants of up to 5 million won to small businesses hurt by the pandemic is leading to anxiety among people who feel like they are being left out.

Some groups are asking why they are not eligible and questioning the fairness of the process. Some are even expressing grief at being “forgotten” by the government.


Chartered bus drivers and farmers are among those left out.

On Feb. 18, 50 buses affiliated with a union of chartered bus drivers nationwide drove to Yeouido in western Seoul to demand to be included in the fourth stimulus package.


Heo Yi-jae, the head of the union, said, “Even if we ask many government agencies under what criteria we are being left out, nobody can explain.”

He noted that chartered bus drivers were also left out of the previous three rounds of government grants.

“We sympathize with the difficulties of the chartered bus industry, but the Ministry of Strategy and Finance has the authority to decide which groups will be included," an official from the Ministry of Land, Infrastructure and Transport told the JoongAng Ilbo last month.


An official from the Ministry of SMEs and Startups said, “Because the plan is drawn up by the government and ruling party, and the final decision is made by the ruling and opposition parties, there is no standard [for eligibility for the grants], and they are allocated for political reasons.”


This official noted, “Taxi drivers have been engaging in collective action sizable enough for the political sphere to notice, but it seems that was not the case for the bus industry.”


Heo lamented that the chartered bus drivers’ “cooperative attitude toward the government has proven to be poisonous,” recalling that they took on extra shifts to help out during a public bus driver strike last year. "Now we have no choice but to go into battle mode," he said.

Jin Sung-joon, a second-term lawmaker from the ruling Democratic Party (DP) and a member of the National Assembly's transport committee said, “Chartered bus drivers have been a blind spot in the stimulus packages and should have been included this time around but were left out. We will do our best to add them in the parliamentary budget review.”

Chartered bus drivers are even more enraged because of the better treatment given taxi drivers.

The chartered bus union was outraged that their drivers received no grants at all.


The Korean Advanced Farmers Federation lamented in a statement on Tuesday after hearing the government’s announcement of the stimulus package that “farmers are not even citizens.”

The government said it excluded farmers from the latest grants because it is difficult to calculate the damages they have felt. But at the same time, vendors selling their produce were included in the fourth relief package.

The federation said that a “welfare policy without standards will lead to public strife,” airing their grief at the Moon Jae-in government's “indifference to farmers.”


A member of the DP’s policy committee said, "Farmers are likely to be granted additional grants without disagreement from the ruling and the opposition parties.”


DP Rep. Jung Sung-ho, chair of the National Assembly's budget and accounts special committee, said, “We will review the various industries that are missing in each standing committee, and maximize bipartisan compromise in the budget committee. However, it is realistically impossible to completely get rid of all blind spots.”