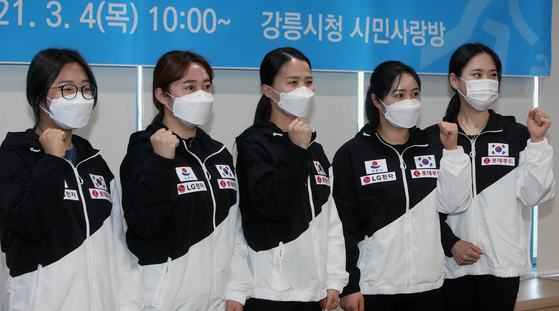 Korean women curlers Team Kim, who won the silver medal at the 2018 PyeongChang Winter Olympics, pose for a photo after the team business agreement at Gangneung City Hall in Gangwon on Thursday. [YONHAP]

During the PyeongChang 2018 Winter Olympics, Team Kim went down in history for Korean sports not only for winning a silver medal in the relatively unfamiliar sport, but also for the sportsmanship and team spirit of former seniors and juniors from Uiseong Girls' High School in North Gyeongsang.

In particular, skip Kim Eun-jung's emphatic yells of “Yeong-mi” to the team lead, who slides and throws the stone, quickly became a meme throughout the whole country.

But barely nine months after their Cinderella run, the curlers claimed that they had been subject to unfair treatment and verbal and emotional abuse by their curling coaches and officials. They also revealed that the coaches owed nearly 94 million won ($83,600) of prize money to the athletes.

After Kim Eun-jeong and Kim Yeong-mi's took leave after getting married, the team fell into a slump and had to yield the national team position to Chuncheon City Hall curling team.

The team won back the Taegeuk national mark in November last year, but had been training without an official team after the contract with the Gyeongsangbukdo Sports Council expired and due to the internal conflict of the Korea Curling Federation ahead of the presidential election earlier this year.

Having to rely on individual training without any support, Gangneung City considered creating a winter sports team to utilize the facilities of the PyeongChang Olympics, such as the ice rink and curling center, and decided to establish a curling team.

Gangneung City Hall finally announced the five Team Kim members on Wednesday. A total of 800 million won will be invested annually for the team until 2023.

During the press conference on Thursday at Gangneung City Hall main conference room, the team delivered their determination to secure medals in the 2022 Beijing Winter Olympics.

Skip Kim Eun-jeong said, “We are thankful for Gangneung City who gave us the opportunity. We will repay them with good results.”

Kim Han-geun, the mayor of Gangneung, said, “I promise to provide support for Team Kim, who led the 'Yeong-mi' syndrome and curling craze, [so that they] achieve good results at the Beijing Olympics with their skills and talents."

Under their new contract with Gangneung City, Team Kim is expected to write the success story of the Winter Olympics once again by re-entering into the world’s Top 5 curling teams with another win in the 2022 Beijing Olympics.

The curlers were scheduled to participate in the 2021 World Women's Curling Championships in Schaffhausen, Switzerland, in mid-March, but the tournament has been canceled for two consecutive years due to Covid-19. Team Kim is expected to concentrate on training in Korea for the time being.