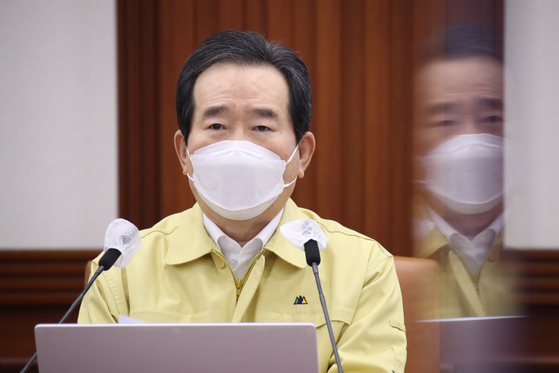 Prime Minister Chung Sye-kyun announces the latest information regarding the arrival of AstraZeneca vaccines in Korea via Covax at a meeting at the Central Government Complex in Seoul on Friday. [YONHAP]


AstraZeneca vaccines to cover 1.05 million people will arrive in Korea by May via the Covax scheme, Prime Minister Chung Sye-kyun said Friday.

“We will receive the AstraZeneca vaccines via Covax to cover 350,000 people within this month, and another batch to cover 700,000 people between April and May,” Chung said in a meeting at the Central Government Complex in Seoul.

The Covax Facility is the World Health Organization’s vaccine-sharing mechanism.

The Korean government had announced by December 2020 that it secured vaccines for 56 million people, more than enough for its population of 52 million, and that 20 million doses to inoculate 10 million people in Korea would be coming from Covax.

The Korean government then announced earlier in February that it expects to receive 2.71 million doses in the first half of the year through Covax — 117,000 doses of the Pfizer vaccine and 2.59 million doses of the AstraZeneca vaccine.

Friday’s announcement was an update to that schedule.

The arrival of the AstraZeneca vaccines via Covax will be in addition to the government’s purchase of 1.5 million AstraZeneca doses to cover 750,000 people in Korea, which began arriving on Feb. 24.

The vaccines are being administered in phases, beginning with the target group that includes medical staff members at hospitals focusing on Covid-19 treatment and patients and staff members aged below 65 at long-term care hospitals, nursing homes for the elderly and other high-risk facilities.

With the updated schedule on vaccine arrival via Covax, Chung asked the Korea Disease Control and Prevention Agency (KDCA) to readjust the vaccination schedule to allow more people to be vaccinated within the first six months of the year.

The current vaccination plan intends to inoculate medical workers, patients and staff at elderly care facilities in the first quarter; seniors aged 65 and older in the second quarter; and the general public between ages 19 and 64 in the third quarter, starting July.

The KDCA aims to vaccinate 70 percent of the population by September and achieve herd immunity by November.

Korea added 398 new cases of Covid-19 infections on Thursday, of which 17 were imported. Among local cases, 129 were based in Seoul and 168 in Gyeonggi.

AstraZeneca's shot gets the nod from a panel of experts