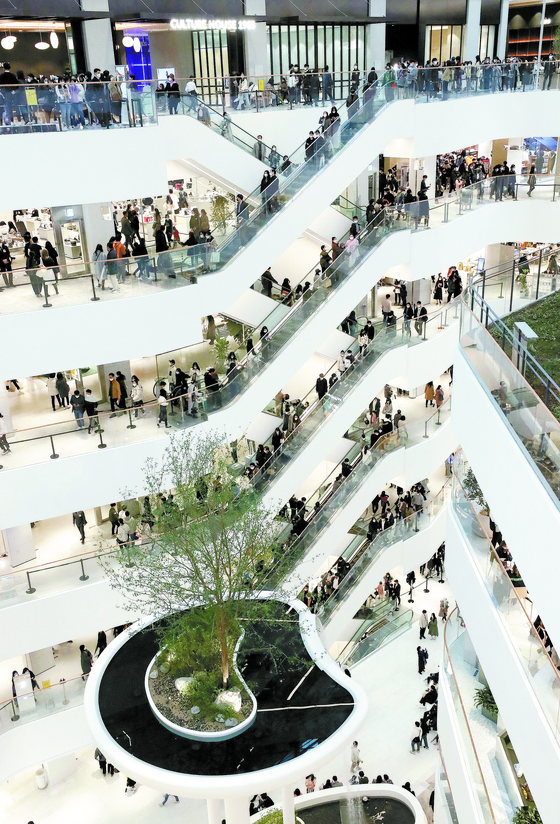 The Hyundai Seoul in Yeouido, western Seoul is crowded with customers on March 1. [NEWS1]


A 30-year-old woman who spent some 140 million won ($124,000) in Shinsegae Department Store’s Daegu branch last year was shocked when she recently learned that she had failed to be selected as "Trinity," the highest level in Shinsegae’s VIP membership program. Instead she was selected for the second highest level, Diamond.

“The year before last, I spent only 120 million won in a year and was selected as Trinity,” she said. “But last year, I failed to qualify even though I spent an additional 20 million won.”

Shinsegae Department Store has six different levels it uses to rank their VIP customers depending on the amount of money they spend per year. Only the 999 people who spend the most annually qualify for the Trinity level.

“Our VIP customers spent more in the department store last year,” said a spokesperson for Shinsegae Department Store. “Even a VIP customer who spent more than 160 million won last year failed to be selected as Trinity.”

According to the three major department stores in Korea — Lotte, Shinsegae and Hyundai — the number of VIP customers who have spent more than 100 million won per year sharply rose last year, largely thanks to the strengthened social distancing guidelines that prevented people from traveling overseas.

At Lotte, Shinsegae and Hyundai, only people who regularly spend at least 4 million won per year are classified as VIP. The VIPs are also ranked by different levels depending on the amount of money they have spent in the particular department stores.

“More VIP customers splurged on luxury goods last year as they were banned from traveling overseas,” said an anonymous source from the industry. “In particular, the VVIP customers spent a lot.”

A 50-year-old woman who is in Lotte’s Avenual level — the highest VIP level of the department store's membership program — said she replaced all of her home appliances and furniture last year as she had to spend more time at home due to the pandemic.

“Sales of costly jewelry that is priced at some tens of millions of won also jumped last year,” said a spokesperson at Lotte Department Store. “As customers are not allowed to enjoy certain leisure activities in the country, more VIP customers spent lavishly at department stores.”

For department stores, which have been suffering from a decline in the number of customers due to the virus outbreak, VIP customers are what they need to attract.

According to the Ministry of Trade, Industry and Energy, sales from 57 branches of three major department stores across the country declined 9.8 percent last year compared to a year ago. Sales dropped in almost all sectors including clothing, food and sports.

The total sales of women’s casual wear plunged by 32 percent year-on-year, while sales in the men’s clothing sector fell 31 percent on year. Sales in the children and sports department also dropped by 17.7 percent and sales of food decreased by 17.1 percent. 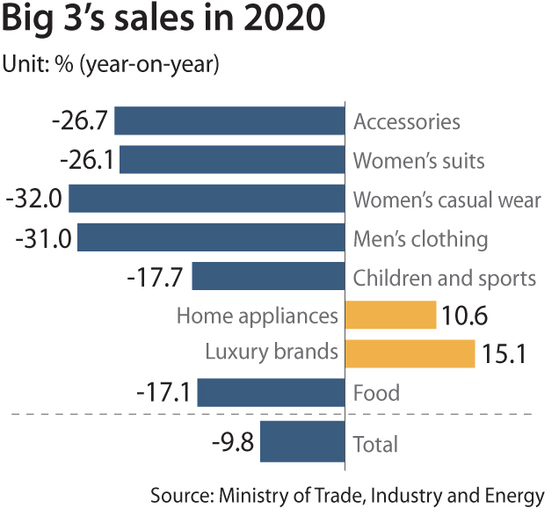 The increases can be attributed to VIP customers.

“In particular branches including the Gangnam branch in southern Seoul, saw some 40 percent of total sales come from VIP customers,” said a source from the industry.

As part of efforts to attract more possible customers, department stores are scrambling to come up with unique services and benefits that are only available for VIP customers. VIPs are offered services such as exclusive use of lounges and discount coupons.

Department stores are also enthusiastic about dividing VIP customers into as many different levels as possible.

Lotte Department Store recently added “Avenual” on top of its highest level “Lenith.” Only customers who spend more than 100 million won are classified as Lenith while those who spend over 100 million won, in particular on luxury brands, are deemed Avenual.

“We recently revised our VIP customer level system as part of efforts to secure our VIP customers for a longer period of time,” said a spokesperson for Lotte Department Store.

Hyundai Department Store is also catching up at rapid speed.

Members of Club YP will be selected from customers born in 1983 or after that have spent more than 20 million won at the department store last year.

Department stores target the young and the rich