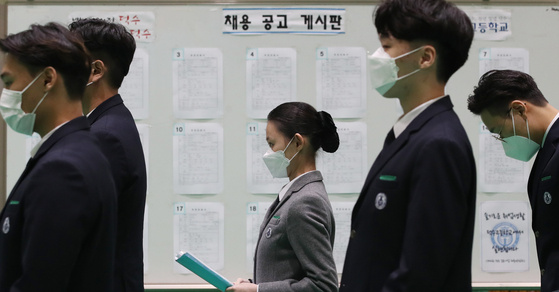 
Three years after getting married, an office worker says she still has no plans to have a child. The 33-year-old said she doesn’t want her children to suffer from chronic social issues such as serious income inequality and high property prices.

“I was raised in Seocho and Mokdong when I was young, but suffered a lot due to the extreme academic and income gap between me and my colleagues who lived in [richer] districts,” She said. “If I give birth without any preparations, my children will have to suffer what I suffered in the past.”

Korean society’s competitive culture, huge income inequality and high property prices are forcing young people to put off their plans for marriage and having children.

The intense competition in the education and employment systems in the country mean people enter the workforce later in life and leads some women to choose not to have children because they'd rather not give birth at older ages.

The average age for a Korean woman to give birth for the first time was 32.2 last year, compared to 29.9 in 2009, according to Statistics Korea.

Some 272,410 babies were born last year, a decrease of 30,300 or 10 percent from the previous year. That was the smallest number of newborns since data started being compiled in its current form in 1970. Meanwhile, some 305,100 people died, an increase of 10,017 or 3.4 percent. This was also the largest number of deaths since data started being compiled.

As a result, the natural population decline, which is the difference between new births and deaths, amounted to 33,000, marking the first time that the number of people who passed away outnumbered newly born babies.

“The major reason behind the situation is that people who were born in 1990s have entered the 30s age group, which is the age group in which most women give births,” said Professor Cho Young-tae, who teaches public health at Seoul National University.

Koreans born in the1990s who have experienced intense competition in their childhood in education and employment sectors are becoming more pessimistic about having babies and raising them in such a competitive society.

“I finally found a stable job after years of struggles,” a 29-year-old office worker said. “It is only recently that I have become available to spend money and time just for myself. If I get married and give birth, I feel like I have to lose another 10 years.”

“I agree that it is worth having children, but I feel like that’s just achieving happiness in uncertain times,” She added. “In Korean society, many women’s careers are interrupted as soon as they become pregnant.”

According to a Bank of Korea report on population change in the post coronavirus era, young people were exposed to intense competition even before the Covid-19 pandemic and their view on marriages has been shifting negatively.

Another 31-year-old woman said she has decided against having a child.

“In retrospect, I think I was never happy in the past because I was always under pressure to survive in this competitive society,” she said. “I don’t want my children to go through the difficulties I had to suffer. I would rather live my life happy [instead of giving birth.]”

According to a report published by Statistics Korea, only 42.2 percent people who are in their 30s said they “will get married" or "It’s good to have marriages.” That figure was 60.8 percent about in 2008.

Among people in their 20s, the number decreased to 35.4 percent from 61.9 percent during the same period.

“Due to the coronavirus outbreak, young people who are stilling looking for a job or thinking of changing jobs might put off their plans for marriage and having children even more,” said Choi Seul-ki, professor at KDI School of Public Policy and Management. “The current social welfare system must be improved in order to reduce the financial burden on women.”

“Because the low birth rate and aging society are issues that cannot be solved in short time, further discussions about changing policies such as extension age of retirement and pension reform are urgently needed at the moment,” Lee said. “The country cannot approach and solve the low birth rate problem without attempts to improve the social welfare system in all sectors including employment and education.”

School-age population estimated to dip below 5 million in 2026