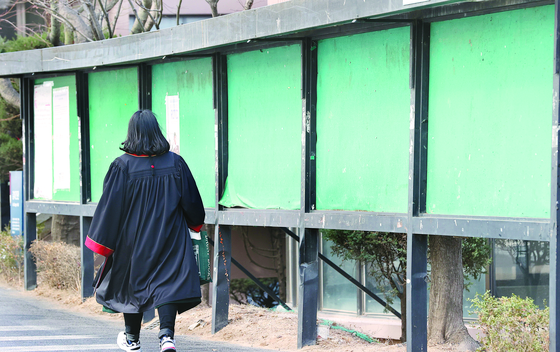 An empty bulletin board, where recruitment information is usually posted, at a university in Seoul last month. [YONHAP]

Large companies either have no plans or have not yet decided whether to recruit new employees in the first half of the year.

Though the economy is expected to recover as a result of mass inoculations against Covid-19, companies continue to stay cautious due to continued economic uncertainties.

KERI received the data from Research & Research, a polling organization.

KERI said the employment market has worsened from last year, considering that 8.8 percent answered they had no plans for recruitment and 32.5 percent said they were undecided in the 2020 poll.

A primary reason behind the decision to reduce the number of the newly employed or not recruit at all is the sluggish economy. More than 50 percent of the companies blamed the sluggish economy and poor economic performance both inside and outside of Korea as reasons not to hire new workers, while 8.5 percent said they feel pressured by the high labor cost.

Companies with plans to hire more employees cited the goal of securing new talent as a primary reason, at 75 percent. Around eight percent of them said they are hiring more due to increased demand for workers for new businesses growing as a result of the fourth industrial revolution and the need to comply with environmental, social, governance policies.

More than 70 percent of firms willing to employ new workers were planning on accepting year-round applications instead holding mass recruitment exercises, up 9.7 percentage points from the previous year. Mass recruitment is common among large companies in Korea.

Big companies thinking out of the box for recruitment