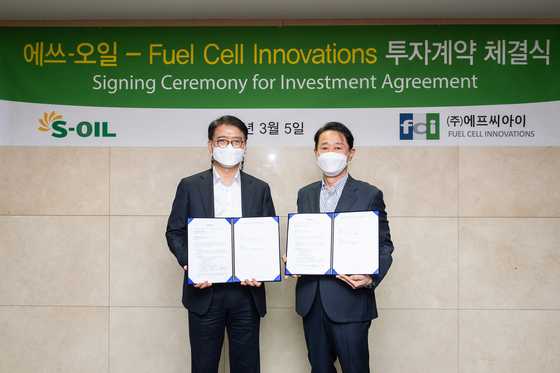 S-Oil is getting into hydrogen through an investment in a fuel cell business.

The oil refiner said on Sunday it is buying 20 percent of Fuel Cell Innovations (FCI), a Korea company with significant Saudi Arabian investment.

The S-Oil and FCI will establish a strategic alliance to accelerate their foray into the hydrogen business.

Fuel cells are devices that produce electricity with hydrogen and oxygen and are one of the key parts of the hydrogen economy.

“This investment heralds our full-fledged foray into the hydrogen economy, and it is anticipated to drive S-Oil’s sustainable growth,” said CEO Hussain Al-Qahtani. “Our company will also vigorously join hands with the government’s endeavors to cut carbon emissions.”

The two companies plan to branch out into the fuel cell business abroad, including in the Middle East.

Currently, FCI is developing products customized for power plants and buildings that suit the climate of the Middle East, according to S-Oil.

"The Middle East is attractive because it can reach grid parity without government subsidies due to its high competitiveness in gas prices, and we will push for localization of major components by 2027 to strengthen our business competitiveness” said FCI Representative Director Lee Tae-won. “We are looking forward to synergy of business with S-OIL"

S-Oil said it is mulling its foray into other hydrogen endeavors that range from production to distribution and sales as its new growth engines.