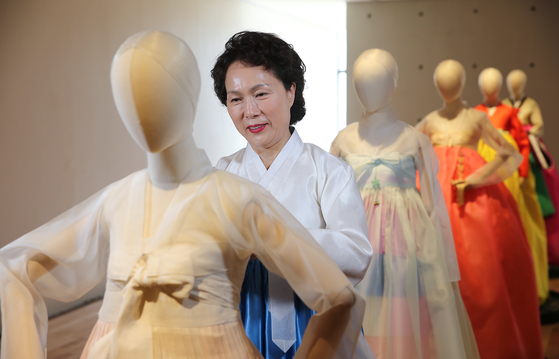 Hanbok, or traditional Korean dress, designer Kim Hye-soon checking on mannequins wearing her work. Her hanbok is on display in the exhibit “Dialogue” at Kim Byung Jong Art Museum in Namwon, North Jeolla, until May 9. [JANG JUNG-PIL]


North Jeolla’s Namwon is the epicenter for learning everything you'd need to know about hanbok, or traditional Korean dress, and a great place to start would be at Kim Hye-soon's latest exhibition.

Kim Byung Jong Art Museum in Namwon is holding a hanbok exhibition titled “Dialogue” until May 9. Garments by hanbok designer Kim Hye-soon, who has held a number of hanbok exhibits overseas including at the Metropolitan Museum of Art in New York in 2011 and the Louvre in Paris in 2012 and worked on garments featured in many different movies and dramas, are on display.


“After I came to the Kim Byung Jong gallery, I decided to give up on all the garments that I had thought about in my head and made all new garments,” said Kim during an interview with JoongAng Sunday, an affiliate of the Korea JoongAng Daily.

The first hall of the four-section exhibit takes on a pink hue inspired by the yeogwi wildflower. About 10 mannequins pose wearing different styles of hanbok, and LED lights inside the mannequins create a dreamy atmosphere. The mannequins stand in front of artist Kim Byung-jong’s large painting, whose title can be translated to “The Forest Never Sleeps,” that depicts the spirit of the forest. The 10 different garments displayed here, including malgun, a kind of clothing women used to wear when they rode horses, are all pink.

“I just wanted to dance in the scene of paintings by Kim Byung-jong,” said the designer.

In the second hall, a queen’s garment is featured. The mannequin wears a fancy hairpin made with corals and jade. Many visitors are surprised to see such accessories and garments up close.

The third hall is located on the second floor. A flower carriage greets all visitors to the floor right away. Experts who have made such wooden carriages for generations are there to point out all the patterns either engraved in or added onto the carriage. The particular carriage being displayed was made in 1990 and was kept in Kim Hye-soon’s warehouse for some time until finally getting to see daylight again.

“The most luxurious thing one could do was to send off the bride in such a carriage covered with the skin of a tiger,” she explained. “It was such a great honor for a clothes designer to prepare everything for the bride who gets to be on the flower carriage.”

Still in the third hall, you can also see some smaller figurines wearing hanbok. Kim’s uncle Heo Yeong (1947-2000), a hanbok figurine maker, made these.

“Among all of those my uncle gave me, the one with the white jeogori [the upper garment of hanbok] and jade color dress is one that’s the most like me.”

She said he used all the best materials to style these figurines and even added their hairs one by one.

The fourth and final hall shows how one wears wedding garments step by step. It has everything from hanbok to flower shoes and accessories that are attached to hanbok to show the full outfit.

Kim sat down with JoongAng Sunday to share how she got to be where she is now, with hanbok. Below are edited excerpts of the interview. 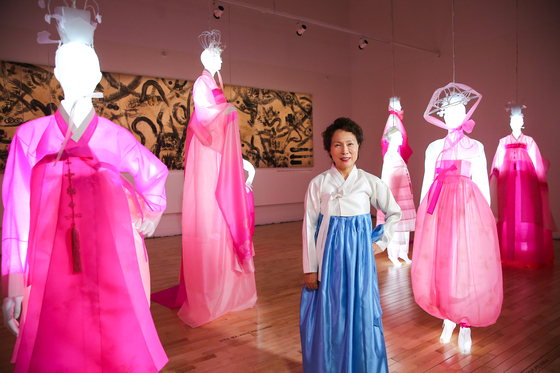 
Q. Why did you start doing hanbok?
A. I started because my uncle suggested that I do this. He had his nieces and nephews work at a studio that makes dolls, but everyone ran away saying the work is too difficult. I was the only one who stuck around. He chose the most stubborn one, myself, and then opened a hanbok store after about three years. Yejeong is my uncle’s pen name, and jeong here means “reaching a certain level.” [I have used his pen name] to name the hanbok stores, such as Yejeong Heoyeong Hanbok in Myeongryun-dong, [central Seoul’s Jongno District], and Yejeong Kim Hye-soon Hanbok in Yeoksam-dong, [southern Seoul’s Gangnam District.]

What did he teach you?
He taught me that whatever I do, I need to make it my best. It cannot be something comparable to what’s sold in any street-side stores. I get my hands involved in weaving the cloths and materials, I order different patterns one by one, and I even dyed cloth on my own. I even made some of the accessories, and of course I used all the top-notch materials I was able to find.


What is it like making hanbok?
My uncle used to tell me that I need to just be able to see what clothes would suit a certain customer when I see them. As I followed the steps of what he used to do, [I got to understand what he said] and I was able to do what he said. If [I can’t imagine hanbok on that customer instantly,] the right garment doesn’t come out. My uncle said hanbok cannot be made when there’s no trust.


Are there ever customers who would bring in a photo of hanbok and ask you to make a custom order?

I tell them that the hanbok fits that model perfectly, but [the same hanbok] would not give them the same fit and style. Then, people just tell me to make one that [I think would fit them best.] I follow my instincts to get the shape and colors to make custom-made hanbok for my customers, and no two garments are the same. Something is always different. So the garments from my store don’t have a price tag. I just tell my customers that the cost is like that of building a house, because making hanbok is like building a house.


What particular characteristics do your hanbok have?
It hands down the tradition seen in Korean-style garments. I had followed professor Yoo Hee-kyung of Ewha Womans University, well known for her research on the history of clothing, even after I got my doctoral degree. Basically I got to add theory on top of all the skills I got from my uncle. Hanbok is a multi-layered art with weaving, dying and needlework coming together in harmony. After I studied the garment style developed in the West, I could see what exactly is ours more clearly.


What was it like to do a fashion show on hanbok at famous galleries and museums overseas?
When I was doing an exhibit at the Metropolitan Museum in New York, Patricia Field, who was in charge of clothing for movie “The Devil Wears Prada,” [2006] came to me and said that she had never seen such garments before, asking how could she have not known about this. She even invited me to her home. Even then, I was contrasting hanbok with garments from many different countries to showcase the beauty of hanbok. I also did something similar to Belgium’s famous fashion designer Dries Van Noten. 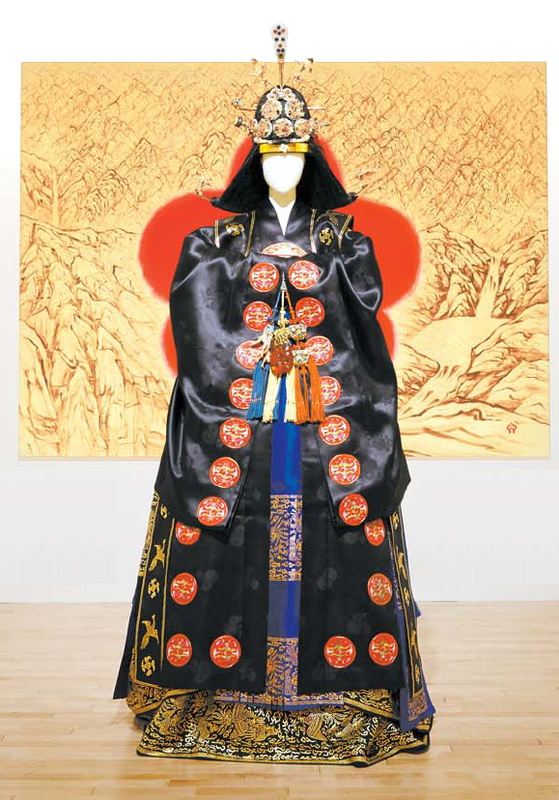 What was it like then?
He was paying much attention to patterns from China and Japan, and one day he apparently asked to get traditional garments from Korea. That was when the book “Beautiful Traditional Jeogori” that I wrote was widely known in the Paris fashion scene, and it caught his eye as well. Thanks to that, garments inspired by hanbok came out for the brand’s 2012 fall and winter season show.


Why aren’t these stories more widely known?
My uncle always told me to never flaunt, as people would come to me when it’s the right time. I didn’t even share news on exhibitions done overseas, so many editors of fashion magazines would scold me.


What do you want to do following the exhibition?
I want to further spread the beauty of hanbok. I also want people to know that there are more affordable styles of hanbok and there are some luxury hanbok as well. With K-pop taking over the world, it’s been said the international crowds are paying more attention to hanbok. But I want to think more about how much attention we give to hanbok.