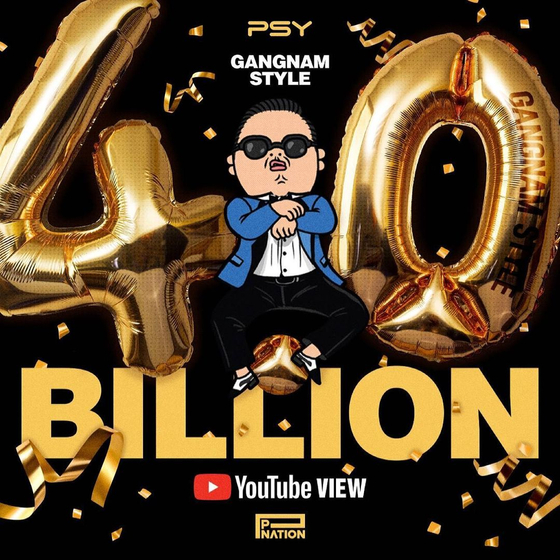 Singer-songwriter Psy uploaded this image to celebrate that the music video of his 2012 worldwide hit “Gangnam Style” reached 4 billion views on YouTube on Sunday, a first for a K-pop single. [P NATION]


The music video of the 2012 worldwide hit “Gangnam Style” by singer-songwriter Psy reached 4 billion views on YouTube on Sunday, a first for a K-pop single.

Psy, whose real name is Park Jae-sang, uploaded a celebratory image Sunday on his Twitter account and on the Instagram account of P Nation, an entertainment company he founded. It shows a cartoon of him sitting on the numerals 4.0.

Released in July 2012, the video of “Gangnam Style” garnered 1 billion views in five months and became the first single video to do so in the history of the YouTube platform. Inspiring numerous memes and parodies across the world, the music video gave new prominence to the global wave of K-pop.

Ever-young PSY is back after five years