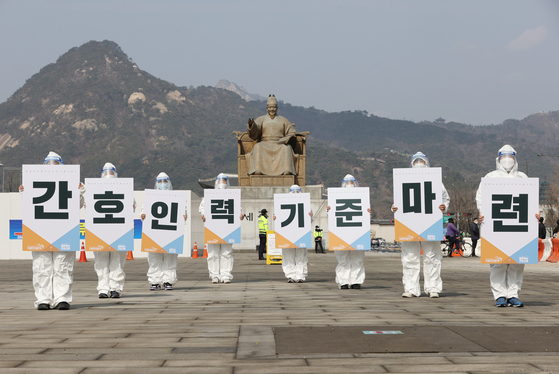 The Korean Health Workers' Union calls for an increase in the number of nurses assigned to Covid-19 treatment wards and for better treatment of medical personnel in a rally in Gwanghwamun Square, central Seoul, Sunday. [YONHAP]

Nine people, ranging in age from their 20s to 60s, have died after receiving shots since the country’s coronavirus vaccination program kicked off on Feb. 26.

Both of the most recent fatalities were female patients with preexisting conditions at convalescent hospitals, according to the Korea Disease Control and Prevention Agency (KDCA).

The first woman in her 50s received an AstraZeneca shot last Tuesday and did not show any symptoms out of the ordinary. She died around 6 p.m. on Saturday, 104 hours after receiving the shot.

The second woman in her 60s received an AstraZeneca jab on Feb. 26 and also died around the same time Saturday.

Health officials said that there is no proof of a direct causal link between the administering of vaccines and the deaths.

There were 806 newly reported cases of adverse reactions to vaccine shots, bringing the total to 3,689 as of Saturday midnight, according to the KDCA.

Those patients generally show mild symptoms such as fevers or headaches. There were 33 cases suspected to be anaphylaxis, or a severe allergic reaction. 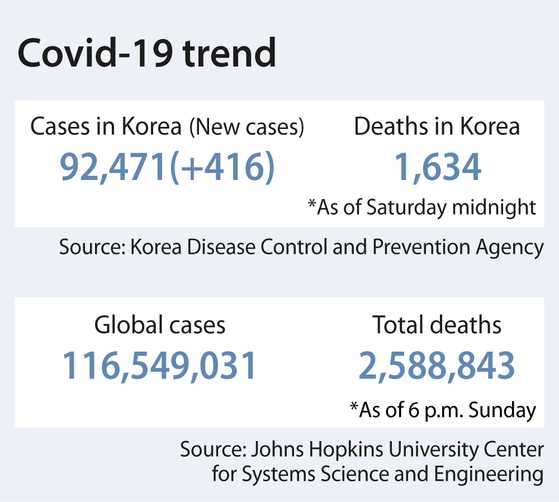 Korea has administered vaccines to 314,656 people, of which 309,387 received AstraZeneca shots and 5,269 Pfizer’s. Patients and health care workers under the age of 65 at nursing homes and other high-risk facilities are eligible for the first round of vaccinations, along with frontline medical workers treating Covid-19 patients.

Health authorities said that fines of up to 2 million won ($1,772) will be imposed on those who cut in line to get vaccine shots.

Of new local infections, 127 were reported in Seoul, 169 in Gyeonggi and 27 in Incheon.

Outside the greater Seoul area, 11 were in North Chungcheong, 10 in Gangwon, eight in Daegu, six in Busan and four in Jeju.

The 17 imported cases included four from the United States, four from Russia and three from Indonesia.

Prime Minister Chung Sye-kyun noted Sunday in a Covid-19 response meeting that while the worst of the third wave of Covid-19 infections has passed, “there are 300 to 400 daily cases for seven consecutive weeks now,” and “increased mobility every week with the onset of spring amid societal fatigue.”

The government will expand Covid-19 testing capacities to 500,000 people a day, said Chung.

Korea plans on adopting a new four-level social distancing regimen that gives more freedom to merchants and small businesses, such as cafes and restaurants.

The four-tiered plan unveiled by the government Friday attempts to be more streamlined and less confusing to the public and rely on businesses’ voluntary participation in social distancing regulations.

The revamped Level 1 will be implemented when daily cases fall below 363 nationwide and require standard social distancing regulations. Level 2 will be applied when cases range from 363 to 778, and requires a ban on private gatherings of more than eight people and stricter social distancing in restaurants, cafes and other businesses.

Businesses that violate social distancing regulations can expect tougher fines and to have their operations temporarily suspended.

Health authorities are expected to finalize the new social distancing scheme by the end of the month.

The greater Seoul area currently remains subject to Level 2 regulations, the third highest level in a five-tier system ranging up to Level 3, while the rest of the country has been at Level 1.5. The government bans gatherings of five people or more. It also limits the operating hours of businesses included restaurants, cafes and bars to 10 p.m. in the greater Seoul area, though it has lifted restrictions on many other businesses including movie theaters, supermarkets and cram schools.

There were also clusters outside the metropolitan area, including 12 more infections linked to a chicken processing farm in Jincheon, North Chungcheong, bringing total cases to 37.